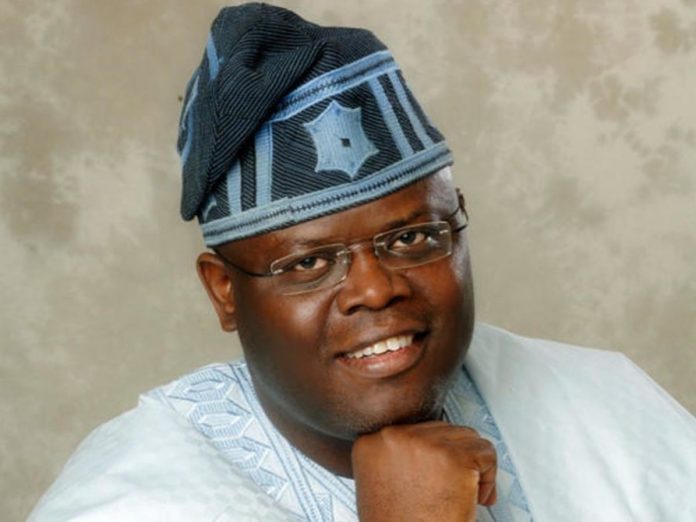 Senator Olugbenga Onaolapo Obadara is a very popular politician in Ogun State. He is a ranking Senator, having been a member of the 7th Assembly of the Senate. The big news is that this Ogun APC Chieftain who is also the leader of SWAGA in Ogun State has joined the Senate race for Ogun Central.

In his letter of intent dated Monday, 7th March, 2022, he wrote: “I write to formally intimate you of my desire to contest for the Senatorial seat of our Senatorial District in the 2023 elections. As you are aware, this for me, is a return to familiar terrain, as our great political family had once given me the mandate to represent our great Ogun Central Senatorial District at the Senate from 2011 to 2015.

In that period at the Senate, without being immodest, I gave a good account of myself in all ramifications, culminating in my appointment by the Leadership of the Senate to the position of Chairman, Privatisation and Commercialisation Committee (The only Committee Chairman from the then ACN and South West). I was also nominated to represent Nigeria at the ECOWAS PARLIAMENT. From the ECOWAS PARLIAMENT, I was nominated to the UNITED NATIONS to represent the region. I effectively combined all these high-profile international assignments with my core responsibilities to the good people of Ogun Central throughout my 4 years duration in the Senate; without anyone affecting the other; and all to the pride of the Senate Leadership and indeed the Federal Republic of Nigeria.

The above-mentioned appointments remarkably impacted my performances in the Senatorial District in terms of projects and empowerment. Altogether, I was able to attract, within my four years at the Senate, 140 verifiable developmental projects across the 6 Local Governments of Ogun Central Senatorial District.”

The Senate is a place where cognate experience COUNTS A LOT. It is clearly through this ranking and rich experience profile that a Senator can bring projects to his/her Senatorial District, as he/she is qualified to be in the Leadership ranks; as well as being eligible to be appointed Chairman of a GRADE A COMMITTEE. In my own case, my then long-standing personal relationship with the Senate President before going to the Senate; plus the divine blessings of God Almighty were factors that aided my uncommon consideration for the committee chairmanship I was privileged to get then.

In terms of development and quality representation, a non-ranking person will be a minus to our Senatorial District and we would be well-advised to look inwards and consider these salient factors. I strongly solicit your support and prayers which, I assure you, will not be taken for granted. I believe you know me as a loyal party man who has served our party meritoriously in various capacities at the State and National levels without blemish. Mine has always been “Promised made, Promise kept”.

Again, I hereby promise, on my honour and in the name of my Creator, that you will continue to be proud of my performances if given the opportunity to represent our Senatorial District once again at the Senate of the Federal Republic of Nigeria through our Great Party, APC, in 2023.”

Who is Senator Olugbenga Obadara? We can tell you. He was born into the famous and illustrious Obadara family of Itesi, Ake-Abeokuta. “My father, Late Chief Joseph Olajide Obadara hailed from Balogun Itesi Toba and he was the first Chairman of Odeda Local Government Council of Ogun State. My mother, Late Chief (Mrs.) Lucinda Ayoka Obadara, hailed from Atan, Iyesi in Ado-Odo/Ota Local Government while her mother was from Igbogila in Yewa of today. By Lineage I am half Egba and half Yewa.1 am happily married to the honorable family of Oguntimirin Ogunde of Ijebu-Ososa. With this, I stand on the tripod that constitutes Ogun State.”

“I had my early education at Itesi Methodist Primary School, Abeokuta and proceeded to Egba-Odeda High School, Odeda where I completed my secondary education with flying colours. For my tertiary education, I attended Ansar-Ud-Deen Teachers’ Training College, Ota and Ogun State College of Education, Ijebu-Ode respectively. I began work as a Grade II Teacher in Ota. I thereafter proceeded to University of Benin, Benin City, where I earned a Second Class Upper Degree B.Ed (Hons) in Education. Besides, I went to Southbank Polytechnic now Southbank University, London to acquire more knowledge.”

“I also studied Corporate Governance and later Mentoring, Planning and Measuring of Privatized and Government Risks in Public Private Partnership at the Institute of Public-Private Partnership, Arlington Virginia, USA respectively. In addition, I attended courses on Emerging Leaders and Managing Change in a Dynamic World at the prestigious Harvard Kennedy School of Government, Cambridge, Boston, USA.” He revealed to City People his personal attributes.

“I am a dedicated, motivated individual with a high sense of work ethic. I possess a well-balanced personality, strong attention to detail, a high level of problem-solving ability, a high sense of innovation, broad knowledge and experience in both public and private sectors. Those attributes of mine have been my strength in achieving my high performance in diverse sectors. I am a devout Christian, though maternally Muslim. I am a Patron of numerous Church and Muslim Associations and, a recipient of several awards from alumni bodies and merit awards from various religious organizations.

“I was honoured with the Ogun State Outstanding Entrepreneur of the year award in 2004 and acknowledged as Pillar of Salt in Ogun State. I was awarded the ‘Lifetime Commonwealth Award for Social Economic Development and Legislative Policies of the Federal Republic of Nigeria’ by the Commonwealth Democratic Initiative in the United Kingdom during the commemoration of the centenarian on Nigeria and the beginning of World War I. I believe in humility, love, respect for people of all ages and gender. I am interested in peace and unity for stable commercial activity within Nigeria and abroad. I am happily married with children.”

How The NORTH Got OSINBAJO To Run Against TINUBU