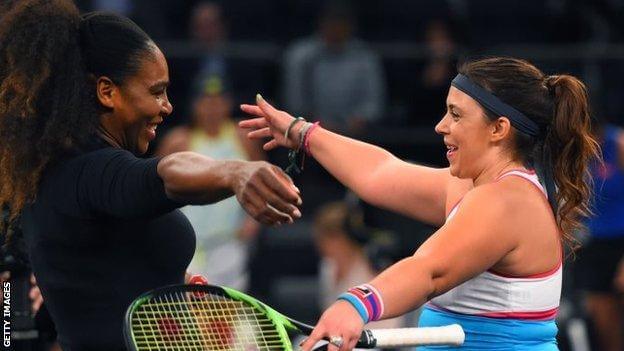 Foemer tennis world number 1, Serena Williams has made no secret of the fact she is motivated by the thought of winning 25.
She also added giving her daughter a meaningful chance to watch her play is another motivation for her to keep playing at top level.

“I have the best thing I could ever want right now. I’ve always been an extremely motivated person, but my main thing is that I would love for my daughter to be around with me doing great, and playing amazing, so that definitely gives me some motivation.

“I would have thought I would have retired six years ago, but I’m still here and I’m playing great, and I think I’ll still be playing good.”

She added it was “impossible” to say how long she would continue to play for.

Williams, who is unranked as she has spent more than 12 months away from the tour, has been drawn to play Zarina Diyas of Kazakhstan in the first round in Indian Wells. The match is likely to be played on Thursday evening, Californian time.

She could play her sister Venus in the third round but has understandably sounded a note of caution.

After all, the former world number one only gave birth six months ago, and six weeks of that time was spent in bed as she recovered from emergency surgery.

“My expectations, I don’t know what they are,” said Williams.

“I can’t go and say I expect to lose because that is something I will never say. It’s just a little different. I’m just expecting to see where I am more than anything.

“This is a good time to start the summer. If I want to play in those Grand Slams [the French Open, Wimbledon and the US Open] and play well, I think now is the perfect time to start.”

The only mother to have won the Wimbledon singles title since World War One was Australia’s Evonne Cawley (nee Goolagong) in 1980.

Another motivating factor, should Williams ever need one.

Most Of The Land In IBEJU-LEKKI Have No Govt Papers