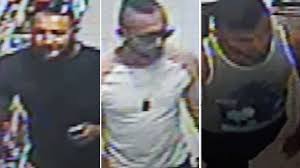 A sixth man has been charged with conspiracy to commit grievous bodily harm over a suspected acid attack on a three-year-old boy in Worcester.

The 41-year-old from London joins five other men who were charged earlier this week in in connection with the incident. The little boy’s 39-year-old father, who cannot be named for legal reasons, appeared at Kidderminster Magistrates Court charged on Wednesday. Adam Cech, 27, and Jan Dudi, 25, both from Birmingham, Jabar Paktia, 41, from Wolverhampton and Norbert Pulko, 22, from London have also been charged over the incident. Five men have been charged but police are refusing to name them.

A three-year-old boy was left with potentially life-changing injuries in the acid attack (Picture: PA) The boy suffered serious burns to his face and an arm in the alleged incident at Home Bargains in Tallow Hill on Saturday afternoon. He was discharged from hospital on Sunday after treatment but the long-term implications of his injuries are as yet unknown. The younger suspects are bare-knuckle fighters and eastern Europeans from the Romani community.

According to reports the boy’s mother, from eastern Europe, had fled to Worcester from Wolverhampton following a fractious breakup. Police moved her and her son to a police safe house after the attack amid fears it could happen again. Detective Inspector Jim Bayliss said this week: ‘Our officers are continuing to work extremely hard on this investigation. ‘At this time we believe this to be an isolated incident and there is not a wider risk to the public.

Senate under Saraki worst ever in Nigeria’s history – El-Rufai