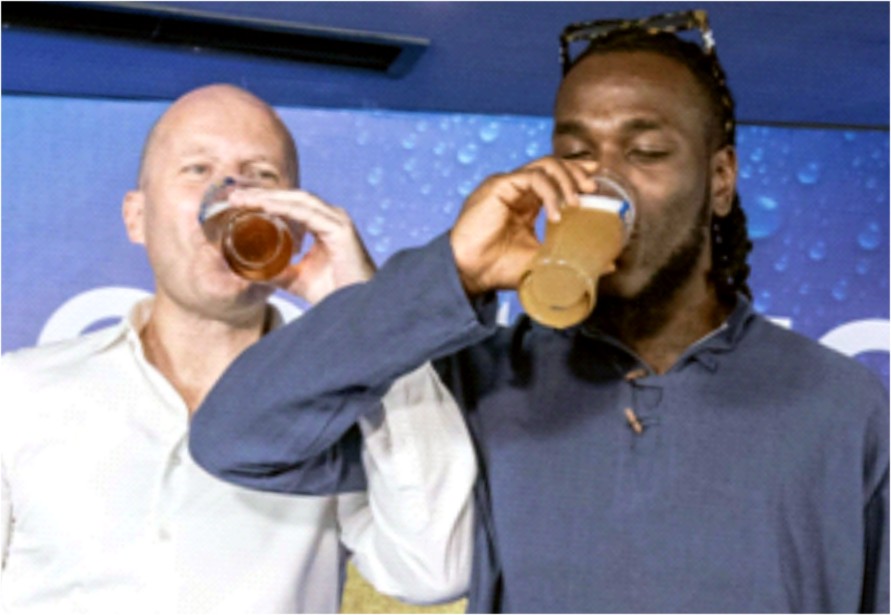 National premium beer brand, Star Lager has revealed that Afro-pop sensation Burna Boy is now an ambassador for the brand. The unveiling was made on Sunday, 27th of January during an exclusive event at Circa, Lekki, Lagos.The announcement of Burna Boy as brand ambassador comes after a remarkable year for the music star in 2018, which featured various highlights such as headlining his own sold out concert, as well as being listed as one of only two African acts to perform at the prestigious Coachella Festival.

Over the years Star Lager has been one of the leading brand supporters of Nigerian music, hence the decision to forge this association with Burna Boy further cementing the brand’s position as a key player in the Nigerian entertainment scene.The brand’s effort in the music industry includes hosting one of the first music talent shows in Nigeria, Star Quest. Following up this landmark achievement, Star also put together some of the biggest music shows Nigeria has ever seen, through its Star Mega Jam and Star Music Trek platforms.

Prior to the unveiling of Burna Boy as Brand Ambassador, Star Lager had previously sponsored the Burna Live concert, in which over 4,000 fans were thrilled by the Afrobeat sensation. The sponsorship of the Burna live concert was part of a series of A-list musical concerts which Star Lager sponsored during the month of December 2018.Star Lager is the oldest indigenous beer brand in Nigeria, and its brand messaging seeks to inspire Nigerians to shine on and be aspirational in their ambitions to create a better tomorrow for themselves as individuals, as well as collectively as a people.

This core messaging is expressed by the brand’s essence and is a prevailing theme in Burna’s music. Born in Port Harcourt on the 2nd of July 1991, Burna Boy whose real name is Damini Ogulu hails from Ahoda local government in Rivers State. After being heavily influenced by afrobeat as a teenager, Burna launched his musical career in 2010 crafting a unique style inspired by reggae, dancehall, and afrobeat. His distinct style instantly caught the attention of Nigerian music fans, and soon, the young man from Ahoda had the world listening to his catchy melodies and records. The last 24 months have seen Burna earn international acclaim for his record-breaking album “Outside”.

He has also collaborated with American Band – Fallout Boys, American electronic dance music group – Major Lazer and  British singer – Lilly Allen. Burna Boy’s success is proof that talents from Africa can achieve global acclaim and international success. This is an idea that Star Lager shares and the brand will be looking to exploit this theme through its relationship with Burna Boy. STAR is Nigeria’s No. 1 beer brand and is the first indigenously brewed beer introduced into the Nigerian market on June 2, 1949. STAR is largely responsible for the growth of the Nigerian indigenous beer industry as its success story has influenced the introduction of other successful brands.