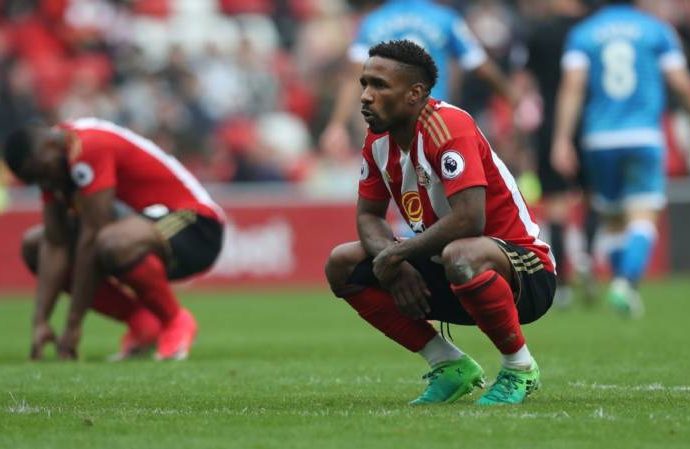 Sunderland were relegated from the Premier League as a late Bournemouth goal condemned them to a 1-0 defeat at the Stadium of Light.

With time running out and the home side piling forward, Josh King struck when Ryan Fraser played him in to tap home.

Bournemouth had made the brighter start and almost scored within a minute as Charlie Daniels crossed and Steve Cook steered just wide under pressure.

Home striker Fabio Borini soon gave Artur Boruc something to think about with a powerful strike, and as the second half began Jermain Defoe saw an effort stopped by Boruc.

Defoe then tried to find Borini and after the ball was cut out it fell to substitute George Honeyman, whose effort was stopped by visiting keeper Boruc.

Hull City gained another point in their battle against relegation as they drew 0-0 at Southampton, with goalkeeper Eldin Jakupovic saving a late Saints penalty.

The Tigers made the early running on the south coast and winger Kamil Grosicki almost broke the deadlock when he curled a superb free kick past Fraser Forster but saw the ball crash against the post.

Southampton improved in the second half and Dusan Tadic sent an effort narrowly over the crossbar before visiting goalkeeper Jakupovic made himself the hero, diving to make a fine stop from Tadic’s spot-kick.

Leicester City took themselves to 40 points for the season with a 1-0 win at The Hawthorns as West Bromwich Albion’s end-of-season slump continued.

The home side’s Chris Brunt was denied by Kasper Schmeichel when he headed at goal from a Claudio Yacob cross after the first threatening move produced by either side in what was a low-key start.

But a long lull was shattered in the 43rd minute when the Premier League champions went in front as Jamie Vardy fired past Ben Foster after Shinji Okazaki had seized on a loose ball to set him up.

The Baggies struggled to create too many meaningful chances in the second half as Leicester held on to move into mid-table.

Stoke City and West Ham played out a drab 0-0 draw at the bet365 Stadium.

Saido Berahino tried to lift out-of-form Stoke with an early turn and shot, but Winston Reid was in the right place to block for the Hammers.

Just after the half-hour, the Londoners came close when Andre Ayew went for goal with an overhead kick which was well stopped by Jack Butland.

Stoke began the second period on the front foot and came close to a breakthrough when a Glen Johnson pass found Joe Allen, whose volley hit the side-netting, and then Xherdan Shaqiri saw his dipping effort saved

Sunderland relegated after Bournemouth defeat as Hull draw was last modified: April 29th, 2017 by Arinze Ago