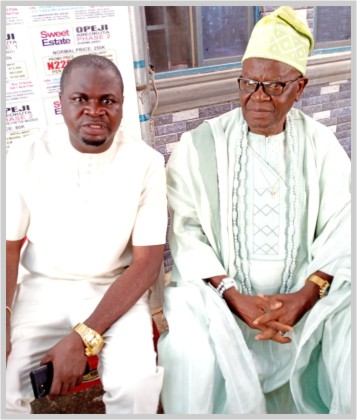 Sweet Estate, one of the top property companies in Ogun State, under the stewardship of Chief Olumide Falola, the Chief Executive Officer of the company, has rewarded some of its numerous customers and consultants with mouth-watering gifts ranging from a house worth 3 million naira, lands, refrigerators, gas cookers and other household equipment.

At a ceremony to appreciate their Customers and Consultants, and to also give back to the society, which held recently at the headquarters of the company in Asero, Abeokuta, beneficiaries of the gifts were drawn through a Raffle Draw.

The winner of the completed building was Mrs Fidelia Okika, while other ceremonies and programmes of activities included the launching of the company’s mobile tour buses to enhance the company operational capacity. Meanwhile, during the raffle draw, one Alhaji Ibrahim Oladele won a  plot of land worth N450,000 as the best consultant of the company, he was said to have emerged as the best performing consultant having attained the position in the company less than two weeks of his coming on board.

The CEO of the company, Chief Falola, while speaking disclosed that, despite the challenges faced by the company recently, it has never stopped the company from being active and continues with truthfulness he has built the company’s reputation on. Chief Falola recalled that he started the business with N10,000 and he noted that there is a need to appreciate and commend the efforts of  Customers and Consultants for their firm belief in the company.

“We started the estate business with just ten thousand naira 4 years ago, and we didn’t borrow any money from any bank”, he revealed. What makes the company grow better was because we are able to build it on truthfulness, and we have never deceived any of our clients to pay for what we don’t have,” he revealed.

The company boss stated that one major reason for the event was  “to give back to the society”, and to launch the estate’s mobile office, as well as to celebrate his father’s birthday, who he said played unforgettable roles in his life.

Other winners include Mrs. Taiwo Akinde who won a plot of land, Mr. Ayodele Oladunjoye won a fridge and a table fan, as well as Mr. Ojewunmi Olakunle, among others who had cause to smile home.

What Star Actress Bimbo Oshin will miss about her husband of 16 years.