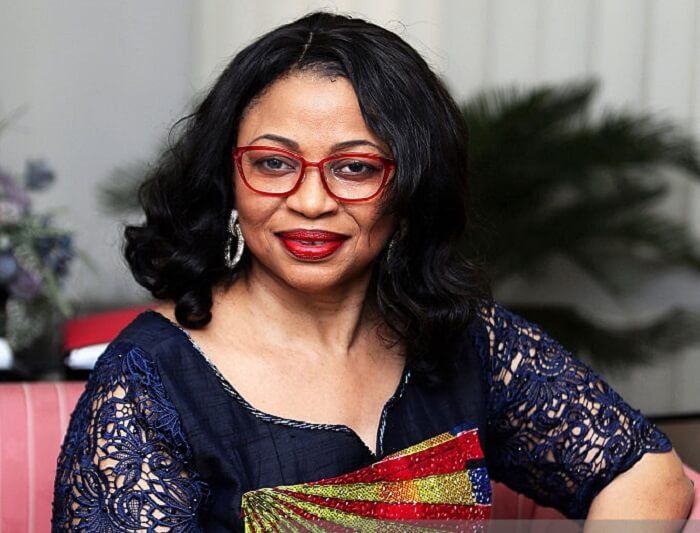 •Why She Doesn’t Buy Aso Ebi

On Thursday 13th July, Chief Mrs Folorunsho Alakija will be 70. And she is warming up to joining the Septugenarian club. But she does not look 70. Many activities have been lined up to celebrate the great achiever all through the week.

Dubbed once as the richest woman in Africa, Folorunsho Alakija is one of the most celebrated women in Nigeria and the world in particular on the account of her emergence as the richest woman in Africa. As she is making a huge impact in the international world, she is also playing big in Nigeria be it in the oil sector where she made her fortune, her fashion lifestyle, marriage and philantrophic gestures through her many foundations.

When you meet Folorunsho Alakija at a glance, what comes to your mind is this question: is this really the richest woman in Africa? Why? Because she has got no airs around her, no arrogance and very calm. She is always soft spoken and one glaring thing you will notice about her is her luxury taste for fashion. She is an unapologetically fashion conscious woman. She wears premium fashion apparels. What do you expect from Nigeria’s fashion pioneer than to always keep it up. If you also notice, being a society woman, as much as she attends A-lists events, Folorunsho Alakija does not wear aso ebi, you can never find her wearing it whether it is expensive or not. This has been her style for several years.

We gathered that it is because she loves to stand out anywhere she goes. She has a way she dresses, she does not dress according to what people are wearing at any gathering but she follows the fashion code ethics and dress to suit the occasion. One would expect that it will always take her hours to dress up but no. When you see her, you can tell she knows the right thing that suits her at all times. Anytime she steps out, She looks very simple but her outfit is always worth millions of naira.

As soon as she gets to any event venue, she is always spot on, on the red carpet where many paparazzis line up to take her photograph. A lot has changed about her now. She is now an Evangelist. And when you see her these days she no longer looks flashy. She wears a Sombre look which is reflective of her being a born again Christian.

She once shared her little fashion secrets when she turned 68, she was asked how long it took her to dress up when she attended her close friend, Senator Florence Ita Giwa’s Birthday and how did she put what what she wore together since the brief was casual, she said, she only dressed according to the dictates of the dress code of any event. She also noted that whenever she gets an invite, it does not take her time to know what to wear and how to put it together because she has been a designer for many years. She also spoke on why she always loves to keep her style simple, she said you don’t need to be loud in dressing to look good.” Just keep it simple and elegant’’. Folorunsho Alakija is a foremost designer, a style icon and in respect of her knack for fashion, she has been recognized both home and abroad. Did you also notice she has a particular style of headgear? She loves to tie her vintage Damask headgear instead of asooke or real headgear. You can never find her wearing any to match asoebi at parties. She loves to wear luxury fabrics like French laces which she sows into beautiful style, when you see her in Ankara, she rocks couture Ankara heavily embroidered or stoned. She has a good figure which makes her clothes fit well. She dramatizes many of her outfits and you will not even know which and which materials she used. For someone like Folorunsho Alakija, she does not disappoint in any style of outfit. She is also a corporate woman, she loves to wear skirt suits for dinner events. She rocks her premium silhouette dresses and lets her hair down. Another fashion staple you will find on her is her love for diamonds. Even if it is the tiniest stud, you will notice it is diamond. She has no apology for dressing well and looking good. She was named Best Fashion Designer in Nigeria in 1986, after which she ventured into the oil industry in the 1990’s.

This Africa’s leading self-made female billionaire and amazon, Folorunsho Alakija, is one of Nigeria’s richest high profile personalities who can still boast of their families. Contrary to the seeming stereotype that successful women cannot have it all, this business mogul surely begs to differ. She is happily married to Chief Module Alakija, the chairman of Famfa Oil and blessed with 4 amazing sons.

How did her fashion business start? Her longtime passion is fashion before she went into the oil business and putting in the required work to achieve her dreams. What followed her resignation where she was working was a resolve to study Fashion Design at London Central School of Fashion. At the time, she was already married with four children. But family, too, wasn’t going to be an excuse for not chasing her dreams. She struck a deal with her husband. The agreement was that she would go to England with their two youngest children because their oldest two were already schooling there. He agreed and she went with the last two. After she came back to Nigeria, she set up her fashion business.

Within three weeks of launching her fashion label, Supreme Stitches in Nigeria, she entered a fashion competition organized by Daily Times, the leading and most prestigious newspaper house at the time. She had initially felt like backing off from the competition, because she felt she had just launched her label but lo and behold, she won the competition.

The win catapulted her into fashion limelight. Daily Times wrote about her extensively, took her on a variety of courtesy visits to society high and mighty. She started to sew clothes for beauty queens, government officials, all sorts of important people. People would also order for clothes to sell to their friends abroad. Women were lining up with bags full of fabrics, waiting patiently for their turn, some for hours thereby enjoying what she was doing. Sewing clothes was, of course, how she struck a close friendship with Mariam Babangida, who got her appointments with the then Petroleum Minister when Alakija was trying to help a friend facilitate a foreign oil deal.

After having her primary education in Wales, she returned to Nigeria to complete her schooling and later went to London to do her secretarial course at Pitman’s Central College. After that she worked as a secretary for Sijuade Enterprises, Lagos, and then for about 12 years she stayed in the banking sector holding different positions starting from an executive secretary at the First National Bank of Chicago (the present Finbank Plc, an International Merchant Bank of Nigeria) in Nigeria, to an office assistant at the Treasury Department. Meanwhile she got married to Mr. Modupe Alakija, a lawyer by profession, in 1976.However, when the bank was closed down some time in late 1970s, she went back to London to study fashion design at the American College and Central School of Fashion, London, and after completion, returned to Nigeria and launched her first fashion brand label, Supreme Stitches, in 1985, which in 1996 was renamed The Rose of Sharon House of Fashion. As she started producing T-shirts in large numbers in 2001, she changed the name to The Rose of Sharon Prints and Promotions. Nobody knows how or why she had switched her career from banking to fashioning, but a sensible guess could be that she got the passion for designing from her mother who had been a noted textile merchant in her own heydays. From there she ventured into the oil industry where she emerged twice as successful. She has affiliations to several other lucrative businesses. Currently she is one of the few world’s black female billionaires, the 3rd to be precise.

And within one year of establishing her career in fashion, she was awarded The Best Fashion Designer of The Year 1986, and that attracted clients like the former first lady Maryam Babandiga, which in turn, attracted the other high-end elite of the society. She wears so many of her own designs that you might prompt to say that ‘she is fashion‘!. She is the lifelong Trustee of the Fashion Designers Association of Nigeria, FADAN,Vice-Chairperson of Nigeria’s National Heritage Council and Endowment for the Arts and was honored at the United Nations by Fashion 4 Development, a global organization to develop fashion and arts. Regardless of her billionaire profile, she still understands her role as a typical African wife.

After her prowess in the world of fashion, she applied for an oil license which was granted and that became the source of her present wealth – Famfa Oil Limited. As a way of giving back, she helps widows and orphans under the parasol of the Rose of Sharon Foundation.

Born in 1951 to the family of Chief L. A. Ogbara in Ikorodu, Lagos State. At age 7, she travelled to the United Kingdom to begin a 4-year primary education at Dinorben School for Girls in Hafodunos Hall in Llangernyw, Wales. After returning to Nigeria, she attended Muslim High School Sagamu Ogun State, Nigeria. Afterwards, she returned abroad for her secretarial studies at Pitman’s Central College, London.

Why OONI Chose Princess TOYIN KOLADE To Be IYALAJE

How Do I Tell Him I Feel Nothing For Him Anymore?