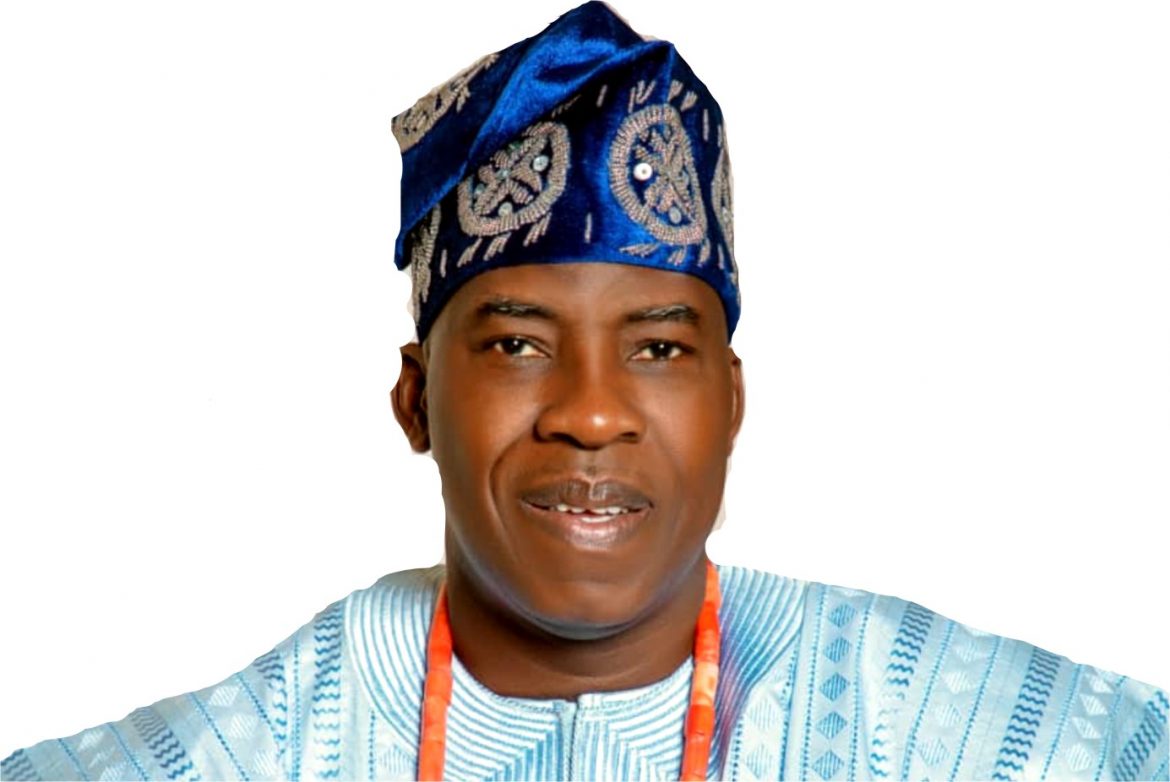 Here is the story of a hardworking man who made history in the business space globally and has now voluntarily decided to make his mark in society as a resolute and people-focused politician. He reached the zenith of business and has decided to take up his political journey to make positive change in Osun State. He is Omo Oba Dotun Babayemi.

He has a clear picture of how Osun State can be better run. He feels Governor Oyetola must have tried his best, but he says his best is not good enough for Osun people. He says he has better ideas that can lead Osun people out of Poverty.

A few days back, City People Publisher, SEYE KEHINDE and SEUN JOSEPH spent an hour with him and he told us in clear terms what he plans to do differently. He is a brilliant guy who has been exposed to global best practices. Read excerpts below;

Can you share with us your evaluation of Osun state as of today?

There were things they had in mind; they had a picture of what the state will look like.

Yes, we have a robust civil service, but it’s very critical to have an agricultural based economy. It is important to be able to create employment, create a sense of ownership. And we know Osun is endowed with a lot of natural resources. What we have seen over the last few years, especially since 2007, is a loss of focus in terms of how the state is being administered.

We’ve had situations where if for instance, external influences have come in determining how Osun should be governed, so we are now looking at government of Osun for Osun. Not an Osun that is being tele-guided from other areas, so you need that individuality to be able to do that.

When we say Democracy, we talk about the government of the people for the people and by the people. I am a proud member of the PDP. The PDP in Osun has provided where there are six aspirants, all solid, all capable, and all competent to take the state to the next level. One of the things with the PDP in Osun and probably in Nigeria, in general, is the fact that you will see the right people in the right places.

So if you go back to some of the government of the PDP, you’ll think they brought in technocrats to come and do the right thing. If you remember, most of the people that were the technocrats when democracy came, came under the PDP regime. Be it Ribadu, EL Rufai, Okonjo-Iweala. That’s something that’s in that party; let’s get the people into the right places to get things done in the right way. So it’s not just an environment where you see the regular politicians. So Osun needs a direction, and that direction is critical. It’s almost tantamount to a rebirth. The last elections in 12 years have been a challenge and as I speak to you, the civil servants in the state are still owed over 30 months salaries, till today.

Because of the lack of focus of building businesses, and building industries, we have a lot of people in the civil service that don’t have other options, and they drive the economy. If you don’t pay their salary, how do you expect the trickledown effect to be there? So the level of poverty is just getting worse and in sitting down assessing it, I figured someone got to do something.

Obviously, I ran for senate in 2019 for Osun West senatorial district. I ran on an unknown platform, I was in the ADP, but we garnered 43,000 votes which showed a high level of acceptance by the grassroots, so when we scales up, people began to show interest in the cause and they told me “you are not doing politics for yourself, you are doing it for the people. That I should see it as an avenue to do for a greater number of people in Osun. So that’s what is driving us. It is to refocus the state, it is to get our economy back on track and in the right direction. So that’s the driving force.

Osun is seriously endowed with resources, and I’ll give you a couple of examples, in Osun State, we have probably the second largest gold deposit in Nigeria. The bulk of it is going into private hands, so there’s no benefit for Osun indigenes. We need to use our God given assets and natural resources to the benefit of the people. So, there’s no real strong feedback to the people as to what can be benefitted. We have over 30 local governments, in more than 50% of Osun, the soil is such, that the quality of cocoa that is harvested top-notch. You go into AYEDAADE all the way to Ife South, bordering the whole state, the soil is just fantastic, and the quality of cocoa that comes out of it is top-notch. It’s something that they look for globally. If you move from there to Ejigbo the quality of cashew you get is the best in Africa. But none of the citizens is benefiting from it. What kind of value can we add in terms of the supply chain? How do you go from not just harvesting it and selling it out?

What kind of processing, how can we create industries that will allow us to process some of these things and get better value for it, than just being traders? So those are some of the things that we are looking at. There is a 10-year re-engineering masterplan that we are looking at, that will focus on Agribusinesses, we’ll take another look at our education, and we’ll look at security, our health service.. These are the four key components within our state that will be focused upon, we know if you get the economy right, every other thing will be better, and we will be able to provide employment for our youths. Osun has a very high population, we’re close to 5 million. Interestingly, 1.6 million out of that 5 million reside in the east senatorial district, from Ipetu-Mobi, Yakoyo, all the way to Ife South and Ipetu-Ijesha, there are no real industries that you can point to. 1.5 million is in the west. In the west, the cocoa factory in Ede is not functioning. We have the capability to actually process, but its not happening. When you go to Osogbo and Osun Central Senatorial district, all the way to Ila, our steel mill is there, everybody is talking about Ajaokuta, there was a point in time when that steel rolling mill was sufficient to carry the economy of Osun State, just one industry. Yet, it’s been run to the ground and what have we done to bring that back? So, there are so many things in terms of economic impact that we have planned for Osun that we expect that with those things coming into being, we would gradually begin to see a revitalized Osun State.

There are also some arguments that these projects as you have mentioned will take time to activate, so in the interim, how do you intend to ameliorate the current situation?

In the interim, one of the things we intend to run away from is taxing our people to death. If you speak to the average politician, they will tell you they will raise IGR. We will not raise IGR until we have created the enabling environment for the economy to grow, out of which people’s wealth will be able to grow with it and then we would be able to get taxes from that.

Luckily for us, one of Osun indigenes is now sitting on the World Federation of Cocoa Product Users. How are we maximizing that to bring industry to Osun so that we can start to process? Let them come and buy it directly from us. Let us add value to our economy.

Another semi-processing that is being done is on cashew export. It will leave Osun State and go to other states for semi processing. Why are we not processing here? So we take products from Osun, still within Nigeria, we take it to other locations, we process it to add value before we then sell. Why can’t we do that in Osun State? These short term needs that bring life to our economy.

How do you see the last four years of this government in Osun state?

That’s a tough question because if I’m going to be fact-based, you can’t point to anything in three years, beyond a flyover that they say was going to be commissioned in 9 months but has still remained ongoing after a year. And it’s not even a dual carriageway. It’s a single flyover. That’s the achievement of this government. Did we agree with some of the policies of the past? Probably not, but at least, during Rauf Aregbesola’s term, you see structures especially in education. Now we are talking about the same party, same government, built mega schools. Those schools were built, and a successor from the same party took over and failed to maintain the structures. Those schools have fallen into pieces.

I’ll give you an example of how bad things have gotten in Osun, about 18 months ago, the advert was placed by the state for teacher employment, and for the first time in the history of Osun State, the government said that there’s a three thousand naira application form to apply. Three hundred thousand people paid to apply for that job. And the government made from that application process, a whopping 90 million naira. As I speak to you, not one person has been employed, almost 2 years later. They said that they had selected a thousand people, but the identity of those thousand people are not known. Why would you do that for people whose economic lives have already been shattered? Do you know that person who had gone out of his way to borrow 3,000 naira to apply? You took a 3,000 naira from 300,000 people, and then you announced that you selected a thousand people to give work. If you invest back the 90 million naira, it will keep a lot of people employed for a long time.

So when you asked me about the achievement of this government, my response is, over the last few years, the leadership in the state, seems to have been confused about a few things; one, the challenges they have within their party. The issue they have within the party is not allowing the people of Osun to enjoy governance under that party. Which is one of the reasons why it is critical to make a change.

This is a year of freedom for the people of Osun. July 16th is the governorship election. It is critical that the people go out en masse and make sure that they vote. The last time we had any government that was for the people was in 2010, and that was Governor Oyinlola. So for 11 years, our people have been stuck. The opportunity is here now to fix the narrative.

This Is The Time To Chase Out APC From OSUN State – Omo Oba DOTUN BABAYEMI was last modified: January 10th, 2022 by City People