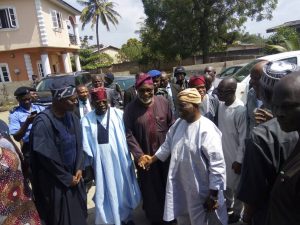 The National Leader of the All Progressives Congress (APC), Asiwaju Bola Ahmed Tinubu, has waded into the lingering crisis in Lagos State over Council Secretaries and Supervisors’ list.

Tinubu and Governor Akinwunmi Ambode had on Tuesday held three separate maraton meetings on the developments in a bid to finally lay the issue to rest.

He later met with some members of the state House of Assembly led by Speaker Obasa, who also played a part in the lingering crisis.

A source who confided in WESTERN POST said a key outcome of the meeting was that status quo be maintained in respect of 13 councils where some party leaders had compiled a new list of Council Secretaries and Supervisors and sworn in same in defiance of the list prepared by the APC leadership, Asiwaju Tinubu and Governor Ambode.

The councils affeted by the development included Orile-Agege, Kosofe, Agboyi-Ketu and the six councils in Alimosho Area of the state among others.

A source who attended the meeting with the chairmen said it was generally agreed that since the officers had been inaugurated, their inauguration should stand.

It was further decided that those rejected in the original list, however, should be accommodated in other appointments.

Angered by what they described as some strange names on the list compiled by the party and released by Governor Ambode, some party leaders in the affected areas had compiled their own lists and backed the chairmen of the councils in the areas to inaugurate them.

“Asiwaju wanted the matter to be laid to rest finally. And that’s why he moved in to pacify everybody,” a source said.

There have been a seeming standoff between some prominent leaders and Governor Ambode over the list of Council Secretaries and Supervisors. Some of the leaders felt the list of the Council Supervisors which they saw as strange emanated from the governor and so they defied it.

But the list was compiled by the APC leadership, led by the state Chairman Chief Henry Ajomale, and Asiwaju Tinubu, which they later harmonised with that of Governor Ambode.