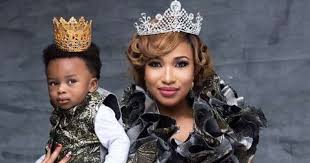 Nollywood actress, Tonto Dikeh has wished for death to visit a fan who criticized her for dissociating her son from former president Olusegun Obasanjo. This she did via an Instagram post.

”A FATHER IS SOMEONE YOU LOOK UP TO, NO MATTER HOW TALL YOU GROW. I CELEBRATE YOU TODAY AS YOU ADD ONE TO YOUR AGE, HAPPY BIRTHDAY BABA,I WISH YOU ETERNAL LIFE IN CHRIST.SHALOM !”.

Angered by the misinformation by @celebritys_kid, Tonto Dikeh dropped a comment to clarify that her son, King, has no blood relationship with the ex-president. She also revealed that she thought Churchill was . to Obasanjo until she found out the truth.

But I wldnt have you using my sons image for a Lie..He has 2grand fathers,One is late and Mine is very much alive..
I was as ignorant as you until I found the truth so pls pls pls and pls again I’m a mother and I wldnt tolerate this…
Thanks and God bless you & your business?Excuse me that’s my son and that’s not his grandfather in any way.Baba is a great man and has been wonderful to me and my son but Unfortunately we have no blood relationship with Baba”, she said

This is all coming after the actress and reality tv star reacted to a picture of her son with former president of Nigeria, Chief Olusegun Obasanjo, which was shared by @celebritys_kid, an Instagram page dedicated to sharing pictures of children of celebrities. The picture was originally shared by Tonto Dikeh’s ex-husband, Churchill Olakunle with a caption that must have misled @celebritys_kid who captioned the picture:

”The former president of Nigeria, Olusegun Obasanjo and his grandchild 100% cute”.

The Instagram page probably got misled after Churhcill Olakunle shared the picture few days ago to celebrate Obasanjo’s birthday.

Tonto Dikeh wishes death on a fan who criticized her for dissociating her son from Obasanjo was last modified: March 28th, 2018 by Igbokwe John