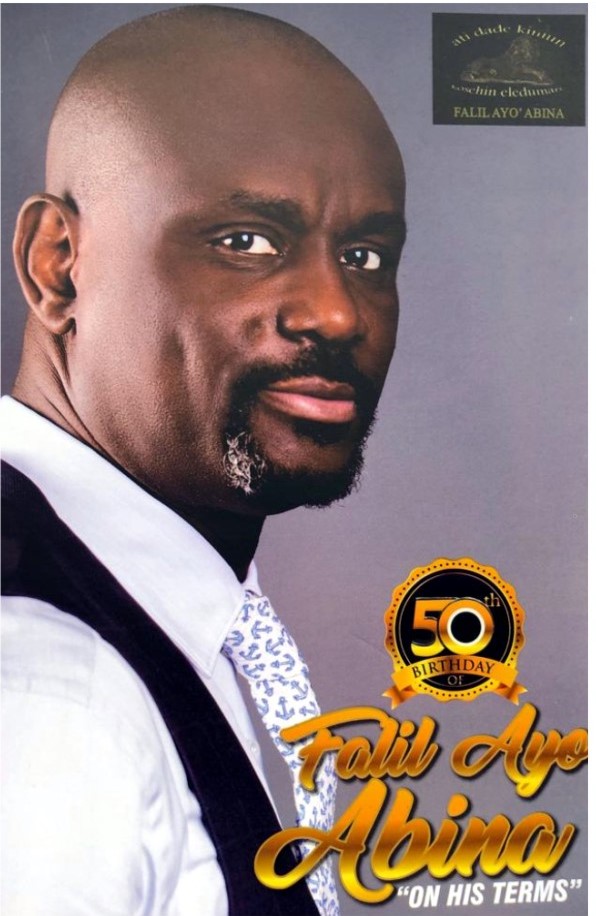 •Chief AFE BABALOLA Reveals A Lot About Him

Success and Destiny are defined by many factors. The invisible and unmistaken hand of God, the Creator, moulds the universe deliberately to different vessels of honour. However, it seems some are more generously endowed by God than others. But the most endowed are those who use their life conditions to define success by touching lives in unique ways that leave lasting memories in the golden template of history. Such is Dr. Falil Ayo Abina, a multi-talented player in the Financial Services Industry, a true and successful manager of human resources who has touched the lives of many in his almost 3 decades in the Banking Industry.

During those 26 years, 16 of which he has spent in Executive Management, he has worked in First African Trust Bank (FATB), Standard Trust Bank (UBA), the rested Oceanic Bank and Skye Bank with experience in key areas of Retail Banking Treasury, Corporate Banking, Public Sector Business, Public Private Partnership among others. Ayo, an Alumnus of University of the then Ondo State University, Ado-Ekiti (now Ekiti State University), University of Ibadan and Ambrose Alli University, Ekpoma where he earned on MBA in Management & Finance, is the son of the late Hon. Justice Abina, a Minister in the Temple of Justice and a man who occupied the Bench with unquestionable integrity, character, industry and dignity. My path crossed that of the celebrator of today later in life when he came to introduce himself as the scion on of the late Hon. Justice Abina, as he was too young for me to know when I started off as a Legal Practioner.

The moment he introduced himself to me, I developed this instant interest in him because his father was very kind and nice to me in the 1960’s. As a young lawyer, I saved some money which I wanted to invest in landed property. I bought this land which at that time was bounded by a footpath which was later developed to become Ring Road.

I got there one day only to see that my farm land has been cleared. Upon enquiry, I was made to understand that the Government had acquired the land for the purpose of a Housing Estate, immediately, I sued the family that sold the land to me. The Head of the vendor’s family was an old man. When the case came before Hon. Justice Abina, he had sympathy for the old man. Because of his sympathy for the old man, he stood the case down and invited me to his Chambers. He told me that with the facts before him and the law, the old man was on his way to jail. He then advised me that as a young promising Lawyer that I should drop the matter to avoid the old man going to jail.

I agreed with the Learned Jurist and the man was saved the agony of going to jail. For his advice, I admired and respected him. As soon as the celebrator of today introduced himself to me, I remembered his father’s advice to me in the 60’s. Since then, I had drawn him close to myself. I did not stop at that. I have made his bank one of my main Bankers.

In his quest for deeper meaning in life and his desire to live beyond the mundane material things which many mortals settle for, Ayo, a Facilitator in Leadership, Negotiation Skills and Decision Making, took to writing and deploying financial plans for organisations and governments especially in the South-West to aid infrastructural improvement in order to enhance the lives of the citizenry and boost production.

It can be said without any fear of contradiction that what stands the celebrator out is his patriotism, determination, selflessness and his strength of character to use his office, and indeed his all for the development and achievement of the good of the majority. He is an example of a cerebral, good natured, committed and an excellent team player who does not find it difficult to achieve peace for himself and accommodation with her environment. A gentleman to the core, Ayo is utterly dependable and unshakably reliable.

As Ayo turns 50 today, I would admonish him to see and acknowledge this as a special grace from the Almighty God and a veritable opportunity for him to do more in his service to a nation which he loves so much and indeed to humanity, the fulcrum of his dream. While congratulating him most heartily on this momentous occasion, which in any case is a clarion call to further service, I wish him good health and peace of heart as well as divine wisdom to continue the good works to continually be relevant in the scheme of things in Nigeria, and even beyond. Hearty congratulations to our “Golden Boy”.

I Have Been Selling Fabrics For Over 25 Years – Popular IBADAN Fabric Merchant, Alhaja BOLA OLOGBURO