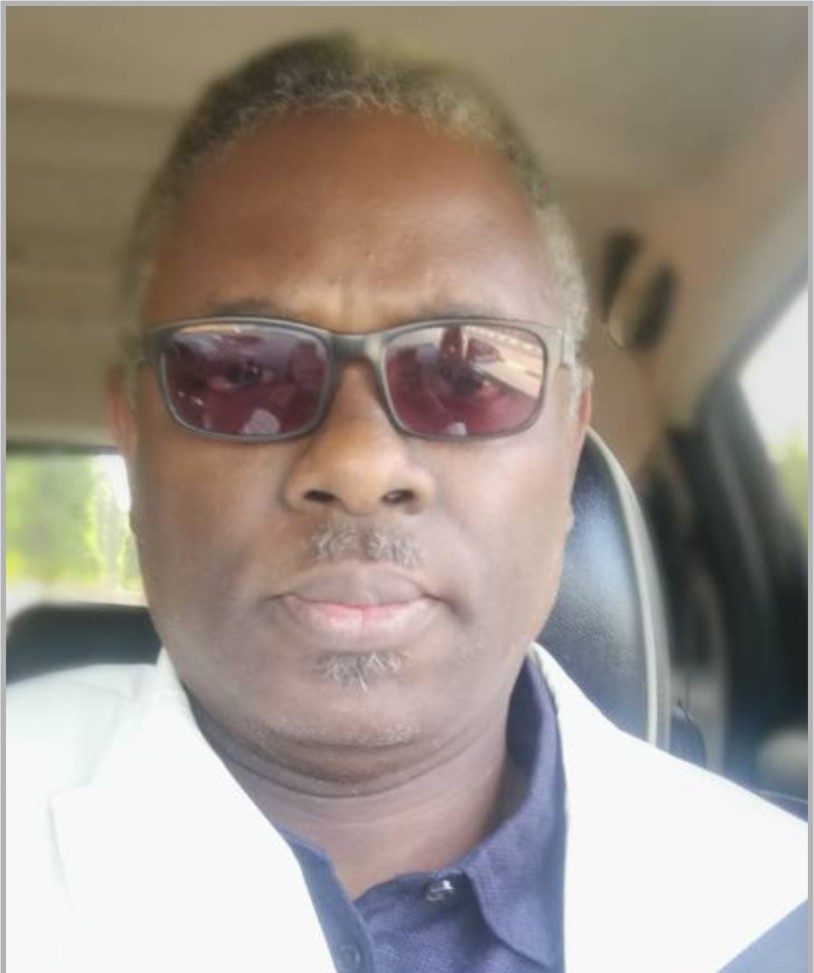 Balogun Akin Oshuntokun is 60. He turned 60 last week Wednesday, 24th November 2021. But he didn’t hold any big owambe party to herald his new age. He and his wife, Ronke, just hosted a few distinguished friends to Open house. He will be marking it with a Lecture to be delivered by the great intellectual and journalist, Dr Reuben Abati.

That is vintage Akin Oshuntokun, who is also a great Intellectual, Journalist, Essayist and Politician, to limit to just this. He is a man of many parts. He is a great mind who is also a deep thinker.

Akin has every reason to celebrate. He has paid his dues. He is an accomplished Nigerian who has played so many roles in public life. Whenever you hear him speak about Nigeria, you will appreciate the richness of his intellect.

Quite interesting is that Akin doesn’t look 60. He has managed to stay slim. He has kept his pencil-slim frame, as he clocks 60. He still looks so young. But for his grey hair, he could conveniently cut off 10 years from his age and nobody will argue with you over that.

Last week, he spoke to City People’s Publisher, SEYE KEHINDE on how he feels about his new life at 60. Below are excerpts.

My own is a minimalist position, I do not expect anything from 2023 other than the possibility of somebody from the South-East becoming president. Otherwise, 2023 is not going to be something different. Angels cannot come down from heaven to fix the process. If the 2023 elections is going to be conducted under this president, there’s no need to feel good about anything. We will be unrealistic to expect that the precedent that this president has set and with the status quo that we have today, will give us a desired electoral value.

At 60, what has changed about you?

You know I’m more tolerant and accommodating. You know when you are 60, you have to come to terms with reality. But I think I’m also a lot wiser, more disciplined, more knowledgeable, of course. And I have become more mellowed by age, although Nigeria is not giving us the latitude to be so mellow.

We wake up in anxiety every day as you see things and hear things that make you mad. So this country is not allowing us to enjoy the benefit of what you should get from age.

What has not changed?

The passion for Nigeria to change for the better, for Nigeria to evolve. Nigeria has so many talented groups. I tell people that of the western region and the eastern region and the northern region, by some work of providence, were spared, the western region is going to be like Brazil. I’m not talking loosely. Just go and look at the history of development and the incremental process. In 1970, UCH was rated as the 4th best teaching hospital in the Commonwealth. Look, the statistics and data are there.

Take my daughter for instance, It is consistent with the pattern of development. I have friends too whose children are exceptionally intelligent like that. That is the society that we inherit, if things are going the way it should be, the tradition of excellence and productivity of development would have been built upon, over and over and over again. If you have UCH in 1970, maybe we should have had about four of it in the west by now, or some better facility. In the 60s and 70s, Nigerians who went to school abroad used to come back home, to come and take faculty positions. Prof. Wole Jide came back home in 1975 to take a tier…. and that was the pattern. The best brains usually came back. So, this is what we have lost

When I was growing up: primary schools, secondary schools in remote country areas were not so disadvantaged. Quality education was so common, and that is the basis of a transformation that the Western region came from the Free education that was created and instituted in 1955 and 1956 by Awolowo. You can see we are not talking in the abstract. Look at the way they were doing things in those days. You can imagine the situation when all the talents outside this country are inside and have the space to work and express themselves, what do you think will be the result of that?

Look at Lagos-Ibadan Expressway, we have been working on it for almost 30 years. Before that road ever got to the stage it is, you would have seen the government probably creating room for maintenance and expansion. But see what we have now? Look at the industrial estate, look at farm settlement, look at TV: Nigeria had television before Japan, see all the sustained developments: this is what we have lost in about 50 years. It is so depressing that what could have been was not achieved.

Just look at every aspect of society, and you will see the reason why it can be so sad.

The youths who have not seen or experienced something better will have no regret because they were born into crisis. But for those of us who knew what was, even though we were young, we experienced the pace of development. Anybody going to abroad to study, we just believe they couldn’t cope in Nigeria, we didn’t need a visa to travel until 1984. Just buy your ticket, go and they will stamp your passport at the port of entry, and that’s all. That’s an indication of the status of society at that time.

Those people who are allowing you to come to their country, are not stupid, they knew that you had no reason to want to remain there. That is simple logic. The moment we started having reason to remain there, they stopped it.

What is running through your mind as you prepare to celebrate 60?

It’s the thought of how short time can get. So, 60 years is gone, and of course on top of that is that Nigeria has wasted years, many years of people’s lives in the degeneration of society. There are many things that one could have achieved, not only me, many Nigerians could have achieved in the past years, but for some 30 years or thereabouts, we have been experiencing some kind of breakdown of society; you can’t live in peace, you can’t keep your children in Nigeria with peace of mind. You spend the most valuable period of your life worrying about one crisis or the other, the issue of electricity, security and of the bleak future. And there’s nothing worse than looking ahead of Nigeria and seeing that it’s almost hopeless.

When you look at the past 6 or 7 years and consider what you could have achieved, but have been wasted by the disruptions in society, there are things that one could have achieved. Being born into crisis and living in them is so worrisome these days. When we were in the universities, secondary schools, primary schools, the society was so structured, so peaceful, so gratifying that you could decide that when you were in the University or secondary school that you want to be a doctor by so-so time, or a professor. Actually, those were our aspirations. Professors were envied, they were the role models of the society.

This gives you an idea of what society has become. So today, it’s just as if everybody has been wasted. Some physically through elimination. This year alone, there is a trend that I have seen: a number of my peers have been dropping dead. It gives you an idea.

And the thing is they won’t show any sign of symptoms or sickness, but you know, it’s what we are carrying inside. We bottle up so many problems, so there are no two ways about it. But you know the worst aspect of it that I keep on saying is that we look at the future, and realistically you can’t see any hope for the country, and that is killing and depressing. Should I start at my age now contemplating going to live in the UK or the US? I spent a year in Oxford a year ago and the creativity, output and productivity that I was able to gather tell its own story.

Here you are now, see what we have been able to accomplish, which specifically is made possible by society, my last daughter just finished her GSCE (General School Certificate Examination) and she had A Asterisk in all her subjects. That is not the best part of it. The best part of it is that she did that in Cardiff and the Welsh Government wrote to her. They said they have identified her, as one of the best students in Wales. They want her to join the network of super-achievers. They will have mentors from Oxford and Cambridge, specifically, they want to start grooming them.

Now, look at that. Compare it to where we are in the point I was making. At secondary school, she has been identified, and they are keying into her right away. Here, what do we have? I read the story of a girl who just graduated from Ife. She cleared all her papers. What I read about her was that Ogun State gave her 5 million or something, and they were asking her where she would do her internship, and she said maybe in Ogun State University. The thing that struck me is, that kind of lady, Nigeria should have immediately keyed into her. Get the best for her, nurture her, because what she has achieved in Nigeria, if it were abroad, 3 best universities would be competing to have her, with all sorts of offers.

So, in different ways, you see our lives being wasted. Nigerians abroad are superstars in what they are doing. The only difference is that they are not in Nigeria. You can directly measure the impact of society in the kind of thing that I’m saying. When I was growing up, anybody who had aggregate 6, 7,8, 9, 10 they were known all over the country. Whoever falls in that category has a sense of purpose, by what he can contribute to society.

What are the lessons you would say life has taught you at 60?

As I said, it was typical of Yoruba that when you are growing up, you value a very good name, more than riches, more than affluence, so you grow up with a sense of wanting to preserve that good name. So finding myself in public life was a lesson, which I have learned. And of course, I’m a very adventurous person. Many of those in my generation knew the value of education. We wanted to do well, but the combination that our father liked is when you are intelligent and rascally. He didn’t like the bookworm. In my own experience, I did it to the extreme. I did very well when I was leaving secondary school. I had Grade one, and it didn’t take much effort. I was also one of the most sociable students back then. It was that playfulness I continued into the university to bag my first degree. At that time, Nigeria was already materialistic, that we just want to finish in the University and work in an Oil Company, Bank so you can make money and be happy. But as time moved on, things begin to change before our own eyes and we began to appreciate the days we were having everything on the platter of gold.