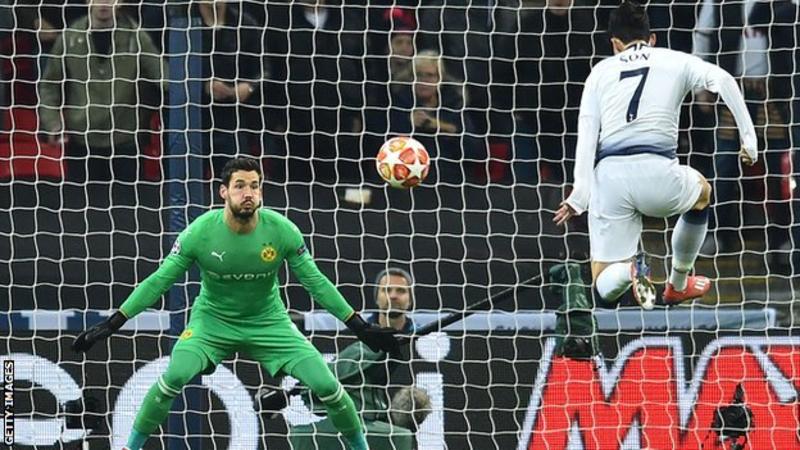 Mauricio Pochettino’s side mounted a remarkable revival to advance from the group stage – and they made the most of that hard work to establish a perfect platform to reach the quarter-finals.

Spurs were irresistible after a tight first half, Son Heung-min breaking the deadlock two minutes after the interval with a side-foot volley from Jan Vertonghen’s cross.

Dortmund, regarded by many as favourites with Spurs missing injured talisman Harry Kane as well as Dele Alli, failed to respond and the home side rammed home their superiority in the last 10 minutes.

The outstanding Vertonghen slid in on Serge Aurier’s delivery and substitute Fernando Llorente headed in Christian Eriksen’s near-post corner – with Spurs also keeping a clean sheet to enhance their chance of progressing.

How could anyone underestimate the resolve of this Spurs side after the manner in which they have kept pace with Premier League pace-setters Manchester City and Liverpool without any squad strengthening and recent injuries to key figures Kane and Alli?

They survived a fierce first half, when keeper Hugo Lloris saved crucially from Dan-Axel Zagadou’s header, to gather themselves for a sustained second-half assault.

And there were heroes to be found everywhere as Spurs’ defence was so assured and the whole side so well-drilled that Dortmund barely threatened after the break.

Son has risen superbly to the extra responsibility thrust upon him by Kane’s absence while Vertonghen was inspired in all areas, not only in his accustomed defensive position but further forward as he created one goal and scored another.

Spurs might have settled for a one-goal lead had it been accompanied by a clean sheet. To score three without reply is dreamland and makes them huge favourites for the second leg in Dortmund on 5 March.

Lots of eyes were on two young talents in the Dortmund line-up, with 18-year-old Jadon Sancho a big future England hope and 20-year-old Christian Pulisic on his way to Chelsea in the summer in a £58m deal.

This was not the night to make any serious judgement as Dortmund were ultimately overpowered by Spurs.

Sancho, who delayed Dortmund’s flight to London by forgetting his passport, showed flashes of pace and quality in the first half but disappeared from view as Spurs assumed total control.

Pulisic was a peripheral figure throughout and it is clear he will arrive at Stamford Bridge very much as a work in progress.

However, the talent is clear and they could still pose a big threat when the teams meet again in Germany.

Another Judge Withdraws From The Trial Of NBA President, Paul Usoro