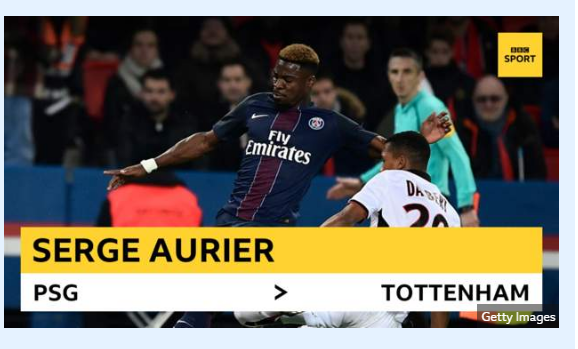 Speaking about his move to Tottenham, Aurier said:

“This is a huge and exciting opportunity at a massive football club and I am determined to prove myself as a professional both on and off the pitch.

“This is a fresh start for me and I will do everything to make the Spurs fan base, which is huge and diverse, proud of me. The fans are the most important people at any club and I am looking forward to showing them and everyone at Spurs the real Serge Aurier.”
The right-back has been with PSG since July 2014 and played 81 times, scoring five goals for the Parisians.
Aurier’s signing makes a somewhat divisive one.
Some are unhappy with comments, deemed homophobic, that Aurier has made in his past and are further unhappy with what the club signing the player represents.
Worries about the players’ character go beyond the political. With a track record of questionable behaviour Aurier could potentially threaten to harm the positive mood in the Tottenham dressing room.
Purely as a player though, all must agree, that few in world football could be a better replacement for Kyle Walker.
Aurier has the pace, strength, stamina and ball-carrying skills that Walker used to stretch opposition defences wide for Pochettino’s Tottenham the past three seasons.
In addition, he boasts a wicked cross that is more akin to Kieran Trippier’s. He is also prone to a reckless tackle but that seems likely something that Pochettino can smooth over.

SEE ALSO: JURGEN KLOPP ON SIGNING ALEX OXLADE-CHAMBERLAIN – FROM ONE GREAT CLUB TO ANOTHER