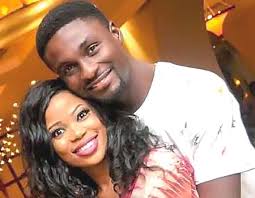 Now the new couple have released their pre-wedding pictures.

Adeniyi Johnson’s marriage to Nollywood actress Toyin Abraham crashed in 2015, after a low-key traditional wedding in February 2013 and a court wedding on July 8, 2013.

The marriage did not produce any children.

After 3 years of dating, Adeniyi Johnson finally ‘popped the question’ and they are now preparing for their wedding.