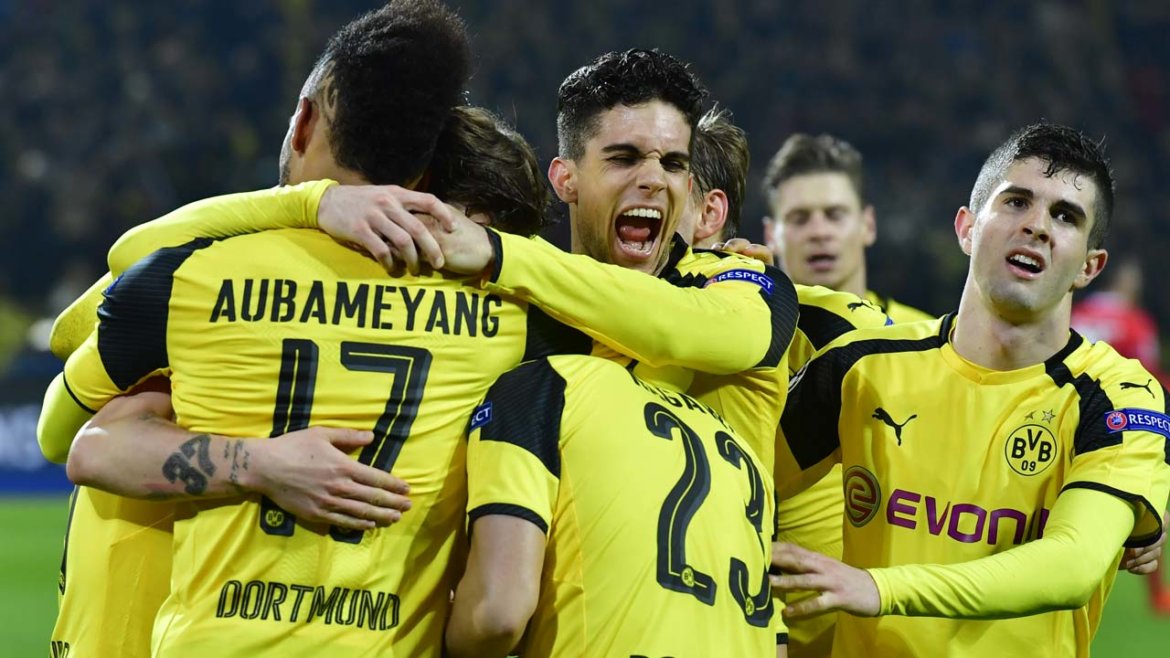 Chelsea have been offered the chance to sign Borussia Dortmund striker Pierre-Emerick Aubameyang for £60m after Chinese side Tianjin Quanjian pulled out of a move for the 28-year-old. (Daily Mail)

Premier League champions Chelsea have reached an agreement with Monaco to sign midfielder Tiemoue Bakayoko, 22, for £40m on a five-year deal. (RMC – in French)

Blues boss Antonio Conte is prepared to sell midfielder Nemanja Matic, 28, for £40m. The Serbian has been training on his own and wants to join former manager Jose Mourinho at Manchester United. (Daily Telegraph)

Everton have made a club-record £40m bid to sign midfielder Gylfi Sigurdsson, 27, from Swansea. The Iceland international has been left out of the Welsh side’s tour of the United States. (Mirror)

The Toffees and West Ham are a number of clubs looking to sign 23-year-old midfielder Mario Lemina from Juventus. (FootMercato via Express)

Norwich winger Jacob Murphy, 22, has turned down a move to Crystal Palace as he is holding out for a move to Newcastle. (Chronicle)

Bury have rejected a third bid of £500,000 for striker James Vaughan, 28, from Championship side Sunderland. (Bury Times)

West Brom and Crystal Palace are interested in signing free agent Bacary Sagna, 34, after the Frenchman was released by Manchester City. (L’Equipe via Birmingham Mail)

The Eagles are close to signing 20-year-old Ajax defender Jairo Riedewald for £8m, despite a late bid from Everton. (De Telegraaf via Croydon Advertiser)

Stoke have rejected loan moves for club-record signing Giannelli Imbula, 23, as they look to recoup the £18.3m they spent on the Frenchman. (Stoke Sentinel)

Arsenal are confident an offer of £45m will be enough to sign 21-year-old Monaco winger Thomas Lemar. (Daily Mail)

Tottenham will not be bullied over the futures of midfielder Eric Dier, 23, and defender Kyle Walker, 27, as the club close in on a £9m deal for 19-year-old Estudiantes defender Juan Foyth. (Daily Telegraph)

Manchester United are hoping to push through a £40m deal for Inter Milan winger Ivan Perisic, 28, within the next week. (Daily Star)

The Red Devils will turn their attention to signing £40m-rated Roma midfielder Radja Nainggolan, 29, as Tottenham continue to resist any offers for Dier. (Daily Mail)

Serie A runners-up Roma want to sign Leicester forward Riyad Mahrez, 26. The Algerian has handed in a transfer request at the King Power Stadium. (Sky Sports)

Championship side Middlesbrough have beaten Premier League sides Burnley and Watford to the £14m signing of Britt Assombalonga, 24, from Nottingham Forest on wages of £60,000-a-week. (Sun)

West Ham are considering a third bid for forward Marko Arnautovic, 28, after having a second offer worth £20m rejected by Stoke City. (London Evening Standard)

City are also looking to make a £25m move for Southampton full-back Ryan Bertrand, 27, after missing out on Dani Alves to Paris St-Germain. (Daily Mail)

Stoke City will beat West Brom to the signing of Chelsea defender Kurt Zouma on a season-long loan, but will pay £7m for the 22-year-old. (Sun)

Leicester City winger Bartosz Kapustka, 20, is having a medical at Bundesliga side Freiburg before a loan move. (Leicester Mercury)