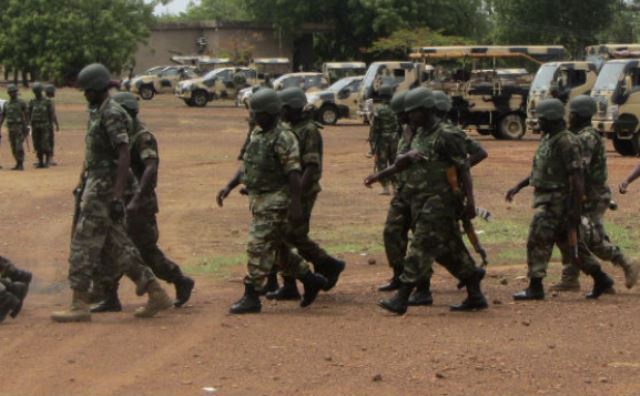 The General Court Martial (GCM), 7 Division of Nigeria Army sitting in Maiduguri, on Tuesday, sentenced two soldiers; Sgt Aliyu Hassan and Corporal Nasiru Bello to 10 years in prison each for the abduction and forcefully receiving the sum of N1 million from victims.

The President of the court, Brig. Gen. Olusegun Adesina, while delivered his judgment, said actions of the soldiers were unlawful and against the ethics of the Armed Forces.

Brig. Gen Olusegun said the duo, charged for the; abduction of Alhaji Hassan on the 19th November 2017 at his residence in Ruwan Shanfi area of Maiduguri to an unknown location and forcefully demanding and receiving the sum of N1 million after he was threatened to be declared a Boko Haram sponsor.

The soldiers confessed that on the said date, they stormed the victim’s house, dragged him out and forcefully took him to Railway Area of Maiduguri, where he was threatened to be tagged a Boko Haram sponsor and subsequently demanded N3 million from him.

However, the victim begged and agreed to pay a million Naira. He then, took the accused soldiers to his shop at Banban line district where he gave them N1 million Naira as promised.

The GMC President, in his judgment, said: “Having considered all pleadings by defense counsel, on 1st count charge; that you Sergeant Aliyu Hassan and Corporal Nasiru Bello are hereby sentenced to 5 years in prison for abduction.

“On count 2 charges that your rank from Sergeant has reduced to Corporal and also your rank from Corporal to private for illegal behaviour in uniform; third count charge for extortion of N1 million Naira from victims, you are hereby sentenced to 5 years in prison respectively and service of term shall run concurrently.” Brig. Gen. Olusegun said.