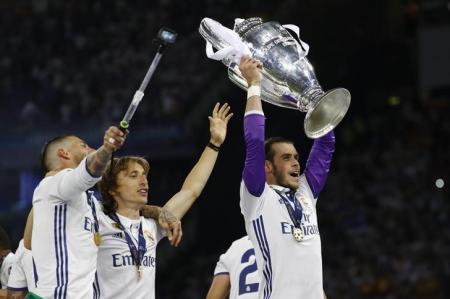 Real Madrid forward Gareth Bale will not return to Tottenham this summer.

Bale’s future in Spain is in doubt after he said he needed to play more often following Saturday’s Champions League final win over Liverpool.

Tottenham had a buy-back clause inserted into the Wales international’s contract when he left to join Real for £85m in 2013.

It offered Spurs the opportunity to match any accepted bid from a Premier League club for Bale, 28.

However, the forward has a contract with the Spanish giants until 2022 and is thought to earn more than £400,000 a week after tax.

It means his likely transfer fee and wages would make a Tottenham bid unrealistic.

Bale will make any decision on his future in conjunction with his advisers.

In the short term, they intend to wait until the dust has settled on his man-of-the-match performance in Kiev before deciding their next course of action.

It is not completely out of the question he might stay at the Bernabeu but, after winning the Champions League on four occasions with Real, the player is not willing to accept a bit-part role in Zinedine Zidane’s squad.

Although the clamour for Bale should he decide to leave Spain would be huge, very few clubs could match his present financial demands.

Manchester United have been linked with the 28-year-old frequently over the past few years but invested heavily in Alexis Sanchez in January, after which manager Jose Mourinho said he would be concentrating on strengthening in other positions during the summer transfer window.

Manchester City appear to be more interested in renewing their interest in Leicester’s Riyad Mahrez, whilst Chelsea’s uncertain managerial situation makes a move to Stamford Bridge more complicated in the short term.

Wizkid Confirms He Has A New Album In The Works