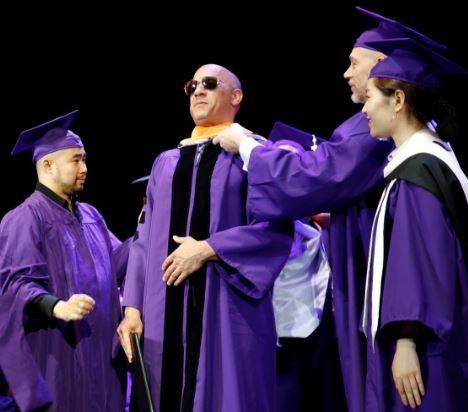 Action movie star, Vin Diesel has been honored with a PhD by Hunter College, 30 years after dropping out without a degree.

The “Fast and the Furious” actor had attended the school for three years in the 1980s, but ultimately dropped out to focus on his acting career.

Speaking to the students while receiving his degree, the actor said:

‘WHILE I WAS IN HOLLYWOOD I ALWAYS HAD THIS PRIDE OF HUNTER COLLEGE. I WOULD TELL EVERYBODY THAT I LEARNED AND TOOK SO MUCH AWAY FROM MY EXPERIENCE AT HUNTER COLLEGE: I WAS YOUNG, I WAS A BOUNCER, WHEN I WASN’T BOUNCING I WAS IN THESE CLASSROOMS WITH THE MOST DIVERSE STUDENT BODY ON THE PLANET. WE’RE STRIVERS. WE CAN OVERCOME ANYTHING. YOU LEARN THAT HERE AND YOU TAKE INTO THE WORLD. AND THEN YOU CAN LOOK AT HOLLYWOOD AND CHANGE THE FACE OF HOLLYWOOD. YOU CAN LITERALLY CHANGE THE FACE OF HOLLYWOOD BECAUSE OF THAT DIGNITY AND PRIDE AND WILLINGNESS TO FIGHT’.

Vin Diesel had earned his big break in Hollywood after Steven Spielberg saw a short film he had written and starred in “Multi-Facial” about the trials multiracial actors go through, and the director had created a part in”Saving Private Ryan” specifically for him.

Eagles’ BEST Eleven Ahead Of World Cup Clashes In Russia