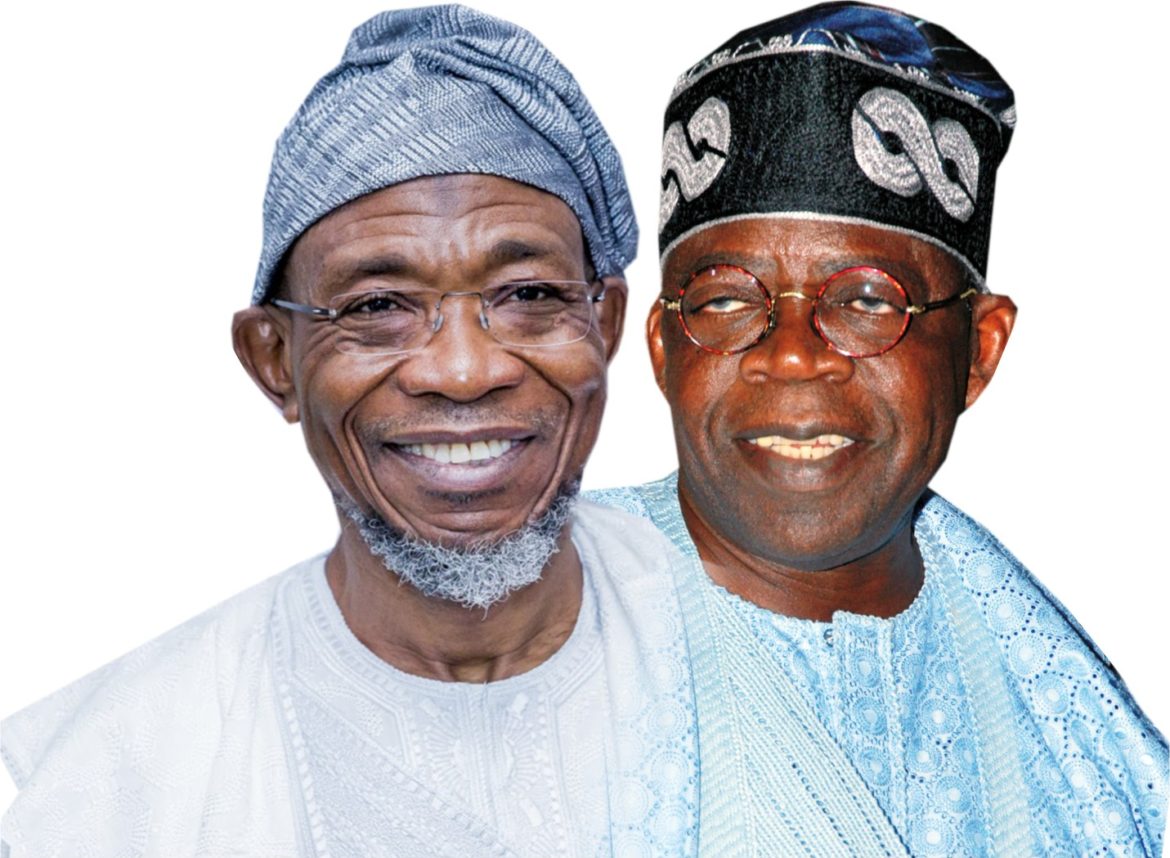 That is the big question on the lips of many political watchers right now. It is because of the on going rift between Asiwaju Bola Tinubu & Ogbeni Rauf Aregbesola. Have you noticed that the relationship between Asiwaju Bola Ahmed Tinubu, the National Leader of the APC and Ogbeni Rauf Aregbesola, the Minister of Interior who is popularly called Aregbe, has not been too rosy over the last few years?

Have you noticed that you have not been seeing Aregbesola and Tinubu together in the last few months?

Have you noticed that Aregbe was one of those who didn’t go to London to visit Asiwaju for the 3 months the APC National Leader was ill?

Did you also notice that he wasn’t among those who welcomed Tinubu at the Airport when he came back from London?

Did you also take note that at all the prayer sessions and receptions held in Tinubu’s honour since he came back, Aregbe has not attended any?

Did you also observe that he is not also among the early callers who visited the Bourdillon, Ikoyi residence of Asiwaju Bola Tinubu?

Did you take cognisance that since the beginning of this year, there have been no photos of Aregbe visiting Asiwaju anywhere in the media?

We can tell you why. City People gathered that it is because all is not well between Aregbe and his political godfather. And this is authoritative. All the key APC members know this, but no one wants to talk about it. They only discuss the issue in hush=hush tones. For many of them, it is a topic that is too hot to handle. So they will rather keep mute. No one wants to be quoted. We can also tell you that as a result of their fight, their over 25 years relationship has crashed.

But both have managed it maturely. Tinubu has consistently told all those who care to listen that he has no issues with Aregbe, who he helped to build his political career. Aregbe too has been mum about it. But over the last 2 and a half years their body language and behaviour has shown that there is a big problem between them. What is the problem? What are the issues?

City People gathered that the fight between Aregbe and Tinubu dates back to when Aregbe left office as Osun State Governor. Revealed an insider, all was well between the 2 of them until when it was time for Aregbe to anoint a successor and he picked one of his preferred Commissioners who he had a soft spot for, after which Asiwaju allegedly picked Aregbe’s Chief of Staff, Oyetola was his preferred candidate. We heard that it was at a meeting with party leaders that Asiwaju told the APC leaders that it was Oyetola he preferred to succeed Aregbe. Tinubu’s argument was simple. Aregbe had been governor for 8 years. He helped Aregbe become governor by substantially investing a lot in all the battles Aregbe fought to become governor. Asiwaju we hear was the man who backrolled all the cases in court. And when Aregbe was declared winner, which annulled the tenure of Olagunsoye Oyinlola, a few slots in Aregbe’s cabinet was given to Tinubu. He was to nominate people for the post of Chief of Staff and Commissioners.

That was how Oyetola came in as S.S.G. Tinubu’s position, revealed a source, is the fact that Aregbe should respect his choice of candidate, who had worked with him as his Chief of Staff. The fact that Asiwaju “forced” Oyetola down his throat didn’t go down well with him. So, he didn’t show sufficient support for Oyetola to win. It was this rift that created issues among the key members of Osun APC. Instead of the party to rally around Oyetola’s candidacy, they were divided. Of course, those loyal to Aregbe didn’t work for Oyetola and their ranks were sharply divided.

This is what led to the fight that broke out after Oyetola because Governor and he began to undo all the policies and programmes that Aregbe had done in the last 8 years. He embarked on a total reversal of all the major initiatives of the Aregbesola government in Osun.

Not only that. Oyetola also took over the control of the party at the state and this saw him coming in collision with the Aregbesola Group.

As to be expected, all the moves Oyetola has made since he came into government has been seen as an attempt to rubbish Aregbe and to whittle down his power and influence.

Aregbe has also not been having it funny at his political base in Lagos. Courtesy of Asiwaju Bola Tinubu, Aregbe plays big not only in Osun politics, but also in Lagos. He is one of the strong grassroot political leaders in Lagos. He controls a large chunk of the followership of the party in this area.

He was also No 2 to Asiwaju in the mandate group, a strong political group set up around the personality of Tinubu. But since their rift began, the Tinubu boys have made attempts to whittle down the influence of Aregbe in that area. All of these moves have not gone down well with Aregbe.

A member of the Aregbe political family told City People that a lot has been done by the Tinubu group in the last few years to battle Aregbe in Osun & Lagos.

What further fuelled the fight between Aregbe and Tinubu is the strong rumour that Aregbe is most likely to run for Presidency in 2023. For months now, there have been strong rumours that Aregbe has been under pressure from the Northern Mafia to join the presidential race. Although Aregbe has not said a word to confirm or douse the rumour, many of those in the Tinubu camp insist that Aregbe is likely to accept to run.

Why the Tinubu Group believes that he may decide to run is also because of Aregbe’s body language since he became a Minister. There are those who feel unhappy that Aregbe got his Ministerial job without informing Asiwaju or getting his permission.

They also revealed that they have uncovered a grand plot to weaken the Tinubu political family by the Northern Mafia promising a few key members the presidential ticket, so as to destablise Tinubu’s plans to be the next President.

They feel Aregbe is one of the key aides of Tinubu who might be used to weaken Tinubu, by encouraging him to join the race.

According to the thinking of those close to Tinubu, the reason the Northern Mafia picked on Aregbe to be Minister and was given a choice portfolio as Minister of Interior was to pick on a few Tinubu aides as Minister and then encourage them to join the presidential race since they are eminently qualified to contest since they have all served 2 terms as governors, before being made Minister.

What has made the ongoing rift between Aregbe and Tinubu sad is because both of them have been age-long friends and political associates? He was one of the pioneer Commissioners under Tinubu in 1999 and he was returned during Tinubu’s 2nd term. It was after this that Tinubu encouraged him to go to Osun and contest for governorship, which he did. When the result came out, he was dissatisfied and he went to court. It was Tinubu who continued to encourage him not to give up because of the rigorous nature of the battles coupled with the huge cost of the legal bill.

Over the years Aregbesola had continually acknowledged the resounding support he got from his political godfather. In a compendium of Tributes published into a book to mark the 60th birthday of Tinubu, years back, Aregbesola eulogised him.

Many are wondering if APC elders can still come together to reconcile the duo.