Home News Why I Made Hon. ODUYOYE My Political Adviser, Gov. MAKINDE Speaks At His 7th Annual Birthday Lecture
News 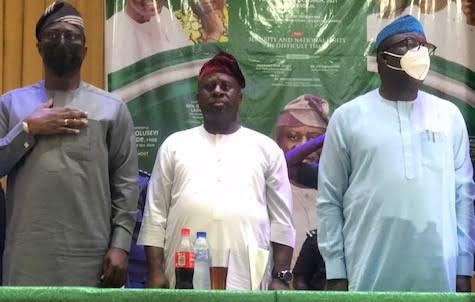 The Oyo State Governor, Engr. ‘Seyi Makinde, last week, made some shocking revelations about his cordial relationship with his Special Adviser on Strategy and Political Matters, Hon. Babatunde Oduyoye. Governor Makinde made these revelations, in his address, during the 7th edition of the Babatunde Oduyoye Annual Birthday Lecture Series. The event, held at Oritsejolomi Thomas Hall, International Conference Centre, Ibadan, attracted top dignitaries from all walks of life. Topic for this year’s edition of the event was, ‘Security and National Unity In Difficult Times’.

In his short address, Gov. Makinde didn’t only laud Oduyoye as a loyal, committed and trusted friend but also described him as a ‘unifier’. Judging by how the event brought people, irrespective of their political affiliation or differences, under one roof. Gov. Makinde said:  “One thing I can say about Hon Babatunde Oduyoye is, he is a unifier. In this gathering, I have seen members of the APC and PDP. Also, I can see some progressives (Afenifere).”

“In 2015, I contested to be the governor and lost. I was going around to see where I was not doing things right and then a very close brother of mine told me that I did not look for a unifier and that was why I lost the election. So, he took me to Hon. Oduyoye. And when I got to him, he said I failed because all other governorship candidates came to meet him and I did not come. And I said, going forward, we will work together. And from that point forward, he demonstrated commitment. And I can tell you that he flew outside the country to meet with a former governor on my behalf, to accept me but he failed in the assignment. But at the end of the day, God did His own thing.”

“If Hon Oduyoye makes any commitment, you can be rest assured that he will follow through. So, I did not have any problem after I was sworn in as the governor to appoint him as my Special Adviser on Strategy and Political Matters. And since then, he has been doing wonderfully well.”

“Today, I am happy to be here for this lecture series. I pray that many more will come. And I am using you as a point of contact for Nigeria and all the October 1st celebrants. I wish all of you many more years of fruitful service to our state, our country in good health.”

Interestingly, Makinde and Oduyoye contested against one another for the Oyo South Senatorial seat in 2007. They both lost in the election. That was when Oduyoye was a serving member at the House of Representatives. He was then the as a Minority Chief Whip, and Makinde was trying to build his political profile.

1st October is Hon. Babatunde Oduyoye’s birthday but for years now, instead of having a jamboree, he has dedicated the occasion as a platform through which critical national issues could be discussed and solutions proffered.

Some of the dignitaries at the lecture include the former Senate President, Senator Aldolphus Wabara who was the co-chairman. He stood in for the Chairman of the Occasion, Sokoto State Governor, Rt. Hon. Aminu Waziri Tambuwal. Chairman, Nigeria Governors’ Forum (NGF), Dr. Kayode Fayemi of Ekiti State was a Guest Speaker at the lecture while the former Governor of Oyo State, High Chief Rashidi Ladoja was the Father of the Day.

The duo of Edmund Obilo of Splash 105.5 FM and Rolake Bello of Fresh 105.9 FM anchored the event. Fayemi, the Guest Lecturer, while speaking on the theme: “Security and National Unity in Difficult Times,” said that the challenge of insecurity in Nigeria has become frightening and is getting all and sundry concerned.

He noted that if the Federal Government must tackle the security challenges confronting the country, it must be prepared to declare bandits terrorists and kidnappers criminals regardless of their geographical indication.

That it has become imperative to amend the constitution to empower the various security initiatives to be able to respond to the current challenges in the country.

“The challenge of insecurity in Nigeria is frightening and is getting all of us concerned. At the dawn of the current democratic dispensation in 1999, the major concern of security experts was the staccato of ethnic and religious violence that was common then, that was before the dawn of the Niger-Delta militancy which took almost a decade. “A new phenomenon in insecurity however waded in with the violent campaign of Boko Haram activities in many parts of the North.” “Added to this is Nigeria’s extensive and porous borders covering over 4000 kilometres littered with illegal entry points and routes totalling 1500 points.”

“With the porous borders, criminal gangs and terrorist insurgents could easily stroll in with smuggled weapons into the country which in turn are sold to sea pirates, cultists, armed robbers, kidnappers, bandits and other purveyors of violence in the Nigerian state.” “In fact the creation of Amotekun can only be a precursor to this. We need a security system that is localised, knowledgeable about the culture and security situation of a particular community.”

“But we need to amend the constitution to empower the various security initiatives to be able to respond to the current challenges.” “For example, despite not possessing AK47 which the bandits possess, Amotekun operatives have been courageous to confront them in the forest and have successfully rescued victims of kidnapping and arrested the criminals in some instances.”

“Yet, these people are at best, volunteer corps with encouragement stipend paid to them. They don’t earn as much as the conventional police, yet they are better motivated to throw themselves to the protection of the community where they have their wives, children and families.”

As a panacea to Nigeria’s security challenges, Governor Fayemi advocated the need for unity to be able to uncover  the face of the evil merchants who have no respect for children, old age, women, clergy or traditional authorities. “They are unsparing and are callous. They have no sympathy for religion, ethnicity or authority and undiscriminating in the pursuit of their satanic enterprise. We must not be ashamed to call for assistance from wherever we can get it in terms of technology, equipment and personnel.”

“In addition, there are two things that we need to address quickly to bring the current wave of insecurity to a halt. We need to have a conversation on how we can recruit a large number of people to join the police and the military even on a short service or otherwise.”

“By available statistics, we need a minimum of two hundred thousand personnel to boost the fighting power of our men. This number is very large and a potential financial and logistic nightmare, yet we cannot delay any further. The ungoverned spaces need to be closed up quickly by motivated men with the singular objective to save the nation,” Fayemi stated.

In his own address, the co- chairman of the event, former Senate President, Adolphus Wabara opined that the Federal government needed the decentralization of the over-centralized security apparatus in the hands of one ethnic nationality in Nigeria by deploying the constitutional approach of Federal Character to the National Security System.

“Every morning when I have to open the pages of newspapers or read through posts on the social media, my heart cuts at the extent of violence being unleashed on citizens of Nigeria. There are stories of killings, kidnapping, banditry, cattle rustling and herders’/farmers brouhaha from the North East, North West and North Central part of the country, the same way we are bombarded with stories of violence, armed robbery, kidnapping and herdsmen infractions from the South West, South East and South South. It’s just like, everywhere you go, there is violence and killings.”

“Besides, there have been growing agitations for self-determination from the South East and South West in recent years. In recent days, the news media was awash with stories credited to the Attorney General of the Federation, Abubakar Malami (SAN), where he threatened that the Federal Government would declare a state of emergency in Anambra State, in view of the wanton killings taking place there.”

“Well, my party, the Peoples Democratic Party (PDP) has promptly reacted and told the Federal Government to back off such thoughts. In the same vein, the Ohanaeze Ndigbo, the Afenifere, PANDEF and other nationality groups have spoken.”

“Rather than adopting the knee-jerk approach in tackling the myriads of security problems facing the country currently, the government at the centre needs to look deep down and design solutions”

Wabara, who also represented Governor Aminu Waziri Tambuwal of Sokoto, congratulated Babatunde Oduyoye, for his commitment to the nation and for showing leadership by instituting the birthday lecture.

On why he organised the birthday lecture, Oduyoye said the love and patriotism for the country drove the passion to institute the Babatunde Oduyoye Birthday Lecture Series.

The former House of Representatives member said the journey started in the year 2003, a year after his election into the National Assembly as the member representing Ibadan North-West/Ibadan South-West Federal Constituency.

He said passion to contribute his quota to the development of the country made him take a small corner from which he felt he could change the world. “This journey started in the year 2003, a year after my election into the National Assembly as the member representing Ibadan North-West/Ibadan South-West Federal Constituency.”

“The conceptualisation of this event, which has become a veritable platform for the discussion of critical national issues and an avenue for seeking solutions to the challenges that bedevil our darling country.

“As a nation, we have had innumerable challenges and threats to our national unity, while on a daily basis, stories of terrorism, banditry, violence, killings and other insecurity challenges continue to weaken the hearts. Agitations for restructuring, national dialogue or whatever name anyone chooses to call it, continue to ring loud, while threats to peace and continued existence of the nation continue to rankle.”

“It was in the midst of this cacophony, this confusion that a still small voice whispered in the ears of the Babatunde Oduyoye Annual Birthday Lecture Committee that we should build the platform for discussions on unity, peace and order in our dear nation.”

Why I Made Hon. ODUYOYE My Political Adviser, Gov. MAKINDE Speaks At His 7th Annual Birthday Lecture was last modified: October 21st, 2021 by Dare Adeniran