Home News Why Many Actors Are Becoming Gay
News

Why Many Actors Are Becoming Gay 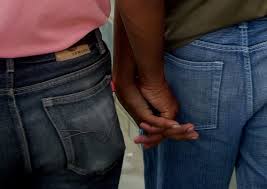 The truth is that many Nigerian male actors are gay. They prefer being with a man as against being with the opposite sex. Being Gay, most especially in the entertainment industry, has remained a trending issue for ages. Just when many thought a lot of people involved in this act would have given up and change for the better. It becomes even worse as the numbers keep increasing drastically and many have had to come to terms with the fact, that it’s part of us and gradually accepting it. Though the law kicks against it, this has not in anyway discouraged people involved in the act.

Though it was revealed that a lot of people involved in this life style had at a point in their lives experienced victimization, harassment and rejection and the subsequent negative impact of such events on mental and physical health has led them to being gay.

A popular movie actor, John Orhorha once revealed in an interview. Accrding to him “most of the prominent entertainers making waves today gained prominence via other means.

He opened up stating that during the course of his career, he has been approached by cougars and gays.

“I know what some actors and actresses did to gain the fame that they are enjoying now. Some of the men in the industry are gay, while the women sleep around…”

Many of these celebrities don’t even bother hiding the true nature of their sexuality anymore. They call it living their truth, forgeting the risk attached to it and how society frowns at it.

In other to still satisfy the society and stop people from talking, due to their celebrity lifestyle, despite sleeping with a fellow man, some of them still go ahead to get married but often times, the marriage barely survives few months.

Just when Alex Ekubo and Fancy relationship break up was trending on social media, the U.S based model Fancy Acholonu claimed her former fiance, actor Alex Ekubo refused to be intimate with her in the five years they dated, saying he wanted to be celebate because of his religious beliefs.

This sparked a lot of reactions on social media.

Just when fans were still debating on that, Blossom Chukwujekwu’s ex-wife also shared her view on the trending issue. According to her “if the Presidency/Nigeria can’t find it necessary to legalise being Gay, so that these guys can live their lives normally then there should also be a gigantic penalty for the monsters who knowing their sexuality, still go ahead to marry/trap their opposite sex (victims) refuse them their primary responsibility, heavily manipulate them and shatter their mental and self worth….traumatize them heavily then divorce them only to run along to the next victim and act like they have done nothing wrong”.

It has become a norm in the entertainment industry, as it is revealed that 90 percent of the actors are into the act and they are not even hiding it from the general public, while some still hide it, as many look up to them as role models and mentors in the society.

It was also revealed that these men are involved in this act for the sake of money.

It’s no more news, that most of the highly placed men, politicians, the high and mighty men in the society are gays, so the way the young ladies go after rich older men, same applies to the young male entertainers, they warm the beds of these highly respected and rich men, for material benefits. These men in return pay their bills and offer them the luxurious lifestyle they display or showcase on social media.

A lot of these actors are becoming gays for connections, like earlier mentioned, most of the top shots in the society, who are in the corridor of power are gays, so being partners with such great men, obviously gives them all the necessary connections in high places they desire. It is a known fact that featuring in movies don’t pay their bills anymore, so rolling and dinning with the high and mighty in the society brings in fat cheques from right and left.

With the advent of social media, it exposed many to different lifestyles and weird thing that people don’t only want to see or read about, but also practice. Many are tired of the normal lifestyle, they want something new, more adventurous and daring.

So having sex with same sex is one of the crazy experiences some of these guys want to have. They want to uncover the pleasure in it.

Try new things, instead of sticking to the normal old ways of life.

The support and encouragement from gay communities also encourage them to live their truth and enjoy their life without fear from anybody. They are made of highly placed guys all over the world and they protect their own with everything, and come to their rescue anytime, also providing all the necessary financial assistance they require.

All these and many more are the reasons many young guys are becoming gay and enjoying the lifestyle. Lets not forget that their Sugar Daddies also pamper them with basically everything, and they don’t need to stress themselves too much on ladies outside.

Also majority of these gays are extremely good looking guys, that many ladies are dying to date, so most often, they don’t even need to spend a penny on any lady who they fancy. And they are also so addicted that they don’t even consider settling down at anytime. They have all they want in life. Few of them only consider marriage to fulfil all righteousness and also to put smiles on their parent’s faces.

They also forget the risks involved. Men who have sex with men are at increased risk of contracting HIV and Aids.

Gay men and men who have sex with men might be at higher risk of depression and anxiety. They are more likely to experience body image problems and eating disorders than their straight counterparts.

Gay men might be more likely to suffer domestic violence, though they are likely to stay silent about it due to fear of discrimination.

They are also more likely to smoke and deal with alcoholism than it is with the general population, also substance abuse, because they always want to be in the right mood for sexual pleasure.

Why Many Actors Are Becoming Gay was last modified: January 17th, 2023 by Reporter

7 Ways To Make Your Man Propose To You This Yr

How Lola Faduri Hit It In the...