Home News Why Many Big Men Don’t Joke With Their Mums – The Story Of Chief OKOYA, K1, PASUMA & Co.
News

Why Many Big Men Don’t Joke With Their Mums – The Story Of Chief OKOYA, K1, PASUMA & Co. 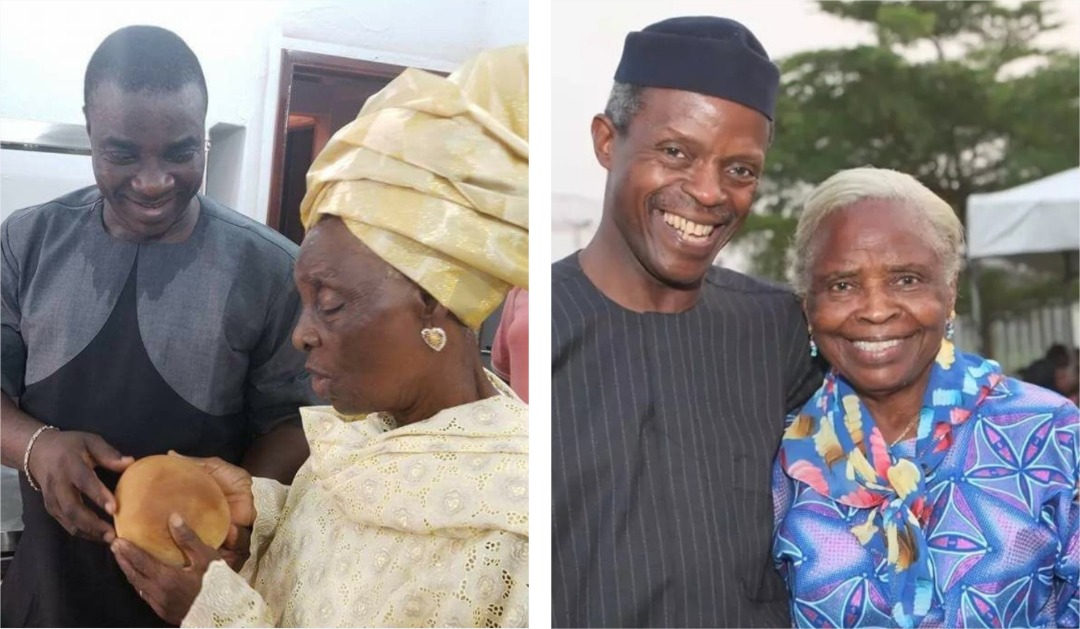 Out of every 1,000 successful men hardly would you get 20 who are not mum’s pet. They cherish their mothers to adoration. It is not a surprise. From womb to laps for sitting, hands for carrying, while breastfeeding, a mother provides more. Fathers should, therefore, not begrudge their wives as sons dote on their mums.

All celebrity men love their mothers, but there is this exceptional bond between celebrity men and their mothers that is unexplainable. There are so many celebrity men who constantly gush about their mums and praise them for all that they did to make them the men they are today. Raising a son and making sure that he turns into a good man is not easy, and it often comes with many challenges. But the mums of these celebrities must have done a fantastic job based on how much their boys love them.

A mum and son’s bond is unlike any other. No matter how much time passes, a mother will always look at her son as if he’s still the little boy she once raised. It’s beautiful to see grown men express their love and appreciation for the women who brought them into this world, and we honestly can’t get enough of it.

These celebrity men constantly post their mums on their social media page and write heart-warming messages, showing the world that no matter how successful they are, their mum raised them as better sons to be who they are.

Many can’t forget how Aare of Lagos shut down Lagos when his mother died many years ago. He even said it many times that his mum gave him the first seed money he used to start his business. So close we are they that he named a Central Mosque after her in Oluwanishola Estate. Glo’s boss is also very close with his mum. He has a big church named after her in Ijebu. What about K1? He worships his mum of over 100 years. Senator Dino Melaye, wept profusely when his mum died mum months ago. Ask any celeb man, his mum is always his mini-god till she breathes her last.

What about the new Oniru of Iruland, Oba Gbolahan Lawal, he adores his mum. He stood up immediately his mum, Alhaja Lawal, walked into Onirus palace for his coronation. Though he couldn’t prostrate as a king, but his love for his mum was so obvious. Have we told you about Oba Saheed Ademola Elegushi? His mum, Olori is dear to him.

What about Otunba Gbenga Daniel, he shared a very strong bond with his late mum. The bond is even unbreakable even in death. Have we told you about Senator Buruji Kashamu? He doesn’t joke with Iya Eleni in Ijebu Igbo. When his mother died last year, the whole of Ijebu Igbo was literally shut down. The event played host to over 5,000 guests and it is still talk of town till date.

Having said that, it is very important that mothers pay a close attention to what their children are learning from them and sons are not excepted. It is even believed that boys learn their earliest lessons about love and trust from their mothers. According to William Pollack, Ph.D., “far from making boys weaker, the love of a mother can and does actually make boys stronger, emotionally and psychologically. Far from making boys dependent, the base of safety a loving mother can create a connection that her son can rely on all his life provides a boy with the courage to explore the outside world. But most important, far from making a boy act in ‘girl-like’ ways, a loving mother actually plays an integral role in helping a boy to be independent.

Probably that is why “Ralph Waldo Emerson” said that men are what their mothers made them. Mothers have a significant impact on their sons to the extent that the way they behave in their later years is attributed to their relationship with their mothers. No other person understands a son child better than a mother. Right from the time he is born till his adult years, a boy nurtures a deep-rooted bond with his mum. And this relationship is imperative for the overall development and emotional health of the child. Let’s see how a mother influences her son.

Other reasons celeb men love their mums started from early childhood: The bond between the mother and the baby begins right inside the womb. The son picks up his first emotions from the mother and as the nurturing continues, he grows up to be emotionally intelligent and strong. Research indicates that a good mother-son bonding will ensure lower levels of psychological stress in children. When his needs are being taken care of by his mother, he learns to trust and feel emotional security.

Do you know one of the reasons celeb men love their mums is because mums tend to have very listening ears? This didn’t start today. It is something that could be traced to when men were boys. Women employ their sons to express themselves. If a little boy did something, and he wants to confess that he did something wrong, whom does he find more approachable? Not dad. Dads mostly have a firm and strict figure. They are more likely to discipline. Compared to dads (without intentionally degrading them), mums are usually soft-spoken and good listeners. Open communication usually happens between a son and his mother. This attitude is carried out by the son even as he grows up to be an adult. Here, a little boy may still get a punishment, but mum will usually listen to the child’s reasoning first.

Little boys need attention, and good mums fulfil that need. Because the mum meets the needs of her son, as he grows, he will learn to be contented and firm. He would not be affected by peers’ pressure because he knows what to do.

Even according to research, moms are the most influential persons in the decision-making of their sons. Women [mums] are known to be the key in the decision-making that happens in the home. They teach their sons to make the right decisions at the right time and this makes men share a very strong bond with their mothers. This is one of the many reasons celeb men don’t joke with their mums.

One of the reasons celeb men are very close to their mum can also be traced to their youthful days. She is also the one who listens and talks to him, shows him love, and puts spiders outside rather than squash them. This gives him the idea that a woman needs to feel beautiful. With that, he’ll also learn to appreciate the beauty of his future wife.

When life challenges come boys need to be assured that it’s okay to be weak. Mums are first to break the ice of pride in a boy’s life. They are the first to give comfort to them. In earlier times when the boys are little babies, they will experience hurts. Mums are there to kiss and cuddle them when they cry.

Although their kisses and hugs couldn’t fix everything, the fact that the baby knows his mum is there, comforts comfort him. When men grow and get married, celeb men know that they could call and talk to their mums whether or not she could offer a solution, mums will make men feel better by listening and giving them the confidence needed to take on whatever lies ahead.

Why Many Big Men Don’t Joke With Their Mums – The Story Of Chief OKOYA, K1, PASUMA & Co. was last modified: June 15th, 2020 by Abiola Orisile

Why TOYIN ABRAHAM Is The Hottest Actress Right Now!

We Have Answers To The Problems Of Today’s Brands – VERDANT ZEAL, MD/CEO, Dr TUNJI OLUGBODI