WHY MANY LONDON LADIES WILL MISS LATE SOCIALITE BOLANLE OMOJUWA 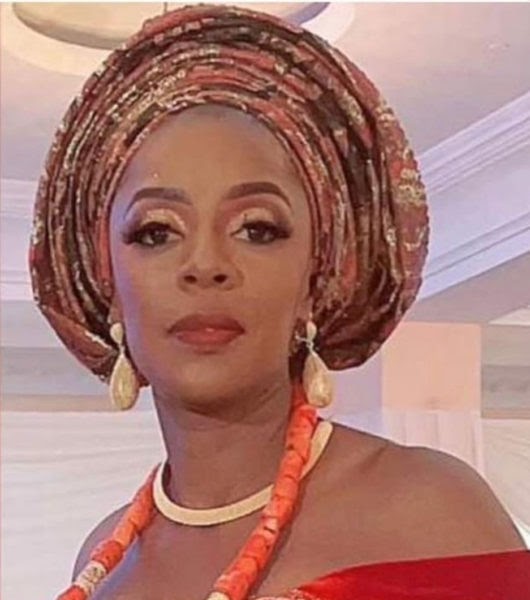 More than 100 London Big babes who flew into Naija for many top parties that shock the social scene for over 6 weeks were thrown into a mournful mood a few days ago when the death of a 47 years old London-based celeb babe, Mrs Bolanle Aworetan Omojuwa, was announced.
Her death came as a rude shock to many of her friends both home and abroad because of the ugly circumstances which surrounded it. Bolanle’s death came exactly a month (4 weeks) after she and her siblings flew home to bury her late mum. A final burial Reception was also held in her mum’s honour. Bolanle was killed by Unknown Gunmen at Guru Maharaji Village along Lagos-Ibadan Expressway.
Contrary to report on social media that Bolanle held her late mum’s burial reception at Civic Centre in Lagos, City People can authoritatively tell you that the reception took place at one of the high-brow event centres in Ibadan. Bolanle Aworetan was not the only daughter of Mama, who came home for the burial. Her elder siblings also flew in from American, and Canada.
She was said to have stayed back after the tell-tales grand reception for her late mum. She was savouring the atmosphere of the Ancient City with her children until Thursday, 19th of August when she decided to leave Ibadan for Lagos. It was on the way that she met her untimely death.
How did it happen? Who was with Bola and her children? Did she leave Ibadan so late at night for this to have happened? These were among many questions City People’s Reporter asked a family friend of Bolanle, who had known her for over 25 years.
According to our source, who doesn’t want his name mentioned, Bolanle was so full of life when all her siblings left her in Ibadan for their different destinations abroad. They were said to have bid one another goodbye without knowing that would be the last time they would see their adorable kid sister, Bolanle.
How did she meet her death on Lagos-Ibadan Expressway? Well, those who know revealed that she left Ibadan with her 3 children and 2 of her nieces whose parents had gone back to London. She left Ibadan on Thursday 19th August because she had a flight to catch on Saturday with the 5 kids.
According to our source, she was driven in a bus which could take all their baggage to Lagos, they were supposed to lodge in a Lagos Hotel where she would leave so early to catch her flight. On getting to Guru Maraji Village area, on the expressway, a few minutes to 7pm, she saw armed men coming out of the bush aiming their rifles at the tyres of 2  buses in front of the bus she was in. Her driver turned back and drove fast to escape as there was no car or bus coming at that moment.
This it was learnt angered the Bandits who fired straight into the bus, while the mother in her wouldn’t rest even as she faces death, she told the children to quickly lie flat on the floor of the bus. Bandit shot sporadically into the bus. A bullet was said to have hit her on the forehead and she died. spot before help could come. Many Alumni of the University of Ado-Ekiti, now Ekiti State University, have taken to their WhatsApp platforms to mourn the deceased, who was one of them.
One of them wrote, “they say we never die, we just change form and continue our existence in another realm. If this is true, I’m sadly mourning you with my tears. It would have been a joy to our world if we weren’t cut down. Bola Aworetan (CO99, Pol Sci) came home from the UK to bury her mom last week or so, and same last week, little did we know she won’t return to the UK again to continue her life.
“This most adorable pretty woman was shot dead in her bus in front of her children at Guru Maharaji Village this past Thursday; unwillingly forcing her to escort her mum to the great unknown. Your death is too gripping for me. I’m bewildered and I don’t know how to mourn you…”
Bola was buried on Tuesday, 24th of August, 2021,  at Rest Pack Eruwa Road in Ibadan, which was the same final abode of her late mum.  Bolanle will surely be missed by her friends,  her 3 children and 2 nieces who witnessed her brutal death.

Meet The 7 Types Of Ladies Men Hate In Bed