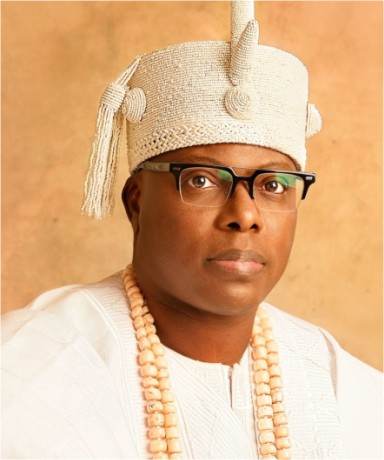 His Royal Majesty, Oba Alayeluwa Saheed Ademola Elegushi and Oba Wasiu Gbolahan Lawal, the Oniru of Iruland are 2 colouful Obas in Lagos. They have many things in common. They are 2 modern day Obas who are stylish in their appearance. They are rich. They live well. They are 2 Obas who have got a lot of swags.

If you go on their Instagram pages you will see that Oba Elegushi likes Oba Gbolahan Lawal a lot. He constantly posts exclusive photos of the 2 of them attending events together. They are very close. It is the same thing with Oba Gbolahan Lawal.

He also has tremendous respect for Oba Elegushi.

What many don’t know is that they didn’t start just being close today. They have been close since their paths crossed in the 90s when both of them worked with Asiwaju Bola Ahmed Tinubu as Governor of Lagos State..

Oba Lawal was Tinubu’s ADC and Oba Saheed was an S.A. to Tinubu. Both were the Big Boys who were members of the Kitchen Cabinet of Tinubu, in those good old days. And when Tinubu left office, both continued their friendship. They took to each other and they have been friends ever since.

Let’s tell you more. Oba Alaiyeluwa Saheed Ademola Elegushi was born 10 April 1976. He is the 21st Elegushi of the Ikate-Elegushi Kingdom. Oba Elegushi is a descendant of the Kusenla Ruling House of Ikateland in Lagos State. He succeeded his father, late Oba Yekini Adeniyi Elegushi, the 20th Oba Elegushi of lkateland, who reigned from 1991 to 2009. Oba Elegushi was presented with the Staff of office by the Government of Lagos State on 27 April 2010. Oba Elegushi served Lagos State as Personal Assistant and Senior Special Assistant to two former Lagos governors: Bola Tinubu and Babatunde Fashola respectively, before becoming a king.

He proceeded to the Lagos State University, where he studied Economics between the year 1995

and 2000, and bagged a Bachelor of Science Degree (B.Sc.) with a Second Class Honorary Degree. He also had Masters degree in Economics in the same institution between 2002 and 2003. He proceeded to the University of Manchester, where he obtained a Master’s degree in Public Administration.

Though Oba Wasiu Lawal became king a year ago, not many people know that they have been very close for over 2 decades.  It is a friendship that has lasted over 25 years.

Despite the little age difference between them, Oba Wasiu Lawal shares a strong bond with Oba Elegushi. That is why they always attend parties and make fashion statements together. Oba Ademola Elegushi and the Oniru seems to have almost same fashion taste. They always rock same style And wait for this: the same Aso Oke merchant handle their royal Aso-Oke.

Since Oba Oniru was installed, they have been spotted at over 30 Big events, together in the last one year.

When HRM Oba Muhammed Saheed Ademola Elegushi turned 45 and had his 11th year anniversary on the throne, Oba Oniru was one.of the early guests. He came in early with his pretty wife, Olori Maryam to honour him. He was also fully involved in the 7-day event. People didn’t expect any thing short of that, seeing how he praised Oba Ademola Elegushi on his social media page before the grand reception. Oba Gbolahan hardly sings anyone’s praises publicly  because he is on the quiet side. He did at that time. What did he write? His words are:  “Alayeluwa Oba Saheed Ademola Elegushi (Kusenla III). My friend and brother, our bond has transcended generations as our fathers were also brothers and monarchs. Since I have known you, you have redefined friendship for me. You bring so much brightness and joy into the lives of everyone around you and I am a living testimony. May the new year bring you nothing but joy and may some of that brightness shine right back at you! Happy birthday! Igba odun, odun kan”.

One shocking fact about Oba Ademola Elegushi and Oba Wasiu Lawal’s friendship is that their fathers were also good friends. Oba Lawal’s father was a a respected High Chief in Lagos when Oba Ademola Elegushis father, Oba Yekini Elegushi was King. This was confirmed by Oba Gbolahan Lawal, the Oniru of Iru. Oba Lawal said he was at Elegushi’s palace to thank him and the people of Ikate kingdom for the love and support shown to him during the process of his ascension and eventual coronation as the 15th Oniru, reminding them that their support during the period helped in simplifying the process.

Oba Lawal said his visit to the palace of the Elegushi is also historic, as his late father, former Ojora of Lagos, Chief Taoreed Akanni Lawal-Akapo had joined the last Elegushi of Ikate, Oba Yekini Adeniyi Elegushi in a welcome dance during the former Elegushi’s coronation over 2 decades ago and that fate has now made him and Oba Elegushi kings over their respective kingdoms, having worked together for many years in the services of the Lagos State Government.

Also, when Oba Wasiu Lawal was called to speak about Oba Ademola Elegushi, during his 45th Anniversary, he spoke so highly about their friendship. He described Oba Ademola as someone who redefines friendship. His words: “ I greet all the kabiyesi’s seated, all Local Government Chiefs, members of Lagos House of Assembly, my darling wife, our brothers and sisters in the house. What do I say about my brother and friend? Kabiyesi Elegushi and I have come a long way. There is no gain saying that our fathers were also kings. I met Kabiyesi at Government House then. Kabiyesi Just came back from Youth Service and was a young man. Kabiyesi Elegushi is a devoted Lagosian. He is a committed and loyal Lagosian. He is a friend we all love. I remember the support Kabiyesi gave me when I became the king and during our coronation. He is still giving me the support till date. He is a progressive king. He has been on the throne for 11 years but the experience is enormous. It is not about age, but he has wealth of experience. I pray and hope our partnership we make Ikate and Elegushi grow. Kabiyesi, I wish you many more years. A peaceful reign that will surpass every other reign” he said.

His Royal Majesty, Oba Abdulwasi Omogbolahan Lawal, (Abisogun II) also has a rich pedigree. He was born on the 24th of July, 1970. He is the 15th Oniru of Iruland. He was born to late Chief Taoreed LawaI Akapo, the

Ojora of Lagos (1977-19 3) and Olori Muinat Olabisi Abeni Ajasa. He is from the Ojora, Aromire, Shokun and Abisogun branch of Oniru royal families of Lagos State. He became the 15th Oniru of Iruland on the 7th of June 2020 after the death of Oba Idowu Oniru (Akiogun II) in September 2019. He was presented with the staff of office by Governor Babajide Sanwo-Olu on the 7th of June. 2020. Prior to his enthronement, he was the Commissioner for Agriculture in Lagos State.

Oba Wasiu Gbolahan was born to Chief Taoreed Lawal-Akapo, the Ojora of Lagos from 1977 to 1993 and Alhaja Muinat Olabisi Abeni Ajasa Lawal-Akapo. He attended Holy Trinity Primary School Ebute-Ero from 1976 to 1982 and St. Gregory College Ikoyi from 1982 to 1987 where he obtained his Ordinary Level Certificate from the West African Examinations Council. He proceeded to the University of Port Harcourt, Rivers State from September 1988 to September 1992 where he obtained RSc (Hons) in Botany. He then proceeded to the School of Oriental and African Studies (SOAS), University of London, for his M.Sc. in Violence, Conflict and Development. He then received an Executive MSc in Cities from London School of Economics and Political Science in 2020, and took a certificate course on jobs for a Globalizing World: World Bank Labor Market Policy Global Course at the World Bank Institute, in April 2010. He also took part in a Programme for Senior Executives in National and International Security: Kennedy School of Government, Harvard University, in September 2006, Strategies for Managing Public Private Partnership: European Centre of Advanced & Professional Studies (ECAPS), Cambridge in November 2011. He also attended the Wharton School of the University of Pennsylvania where he took courses on Housing Finance in a changing Global Environment, (International Housing Finance Program) in July 2015 and Wharton Advanced Management Programme (AMP) in June 2018.

From October 1992 to September 1993, he participated in the mandatory one year National Youth Service Corps at Federal Capital Development Authority, in Abuja. From July 1994 to July 1996 he worked at the Raw Materials Research and Development Council, Federal Ministry of Science and Technology. He enlisted in the Nigeria Police Force in August 1996 and was commissioned as Assistant Superintendent of Police by the Nigeria Police Academy. In October

2008, he retired as Superintendent of Police.

In June 1999, he was appointed ADC/Escort Commander to the then Governor of Lagos State, Bola Tinubu, and served until 2007 when Tinubu ended his tenure as governor. He was appointed Senior Special Assistant (Special Projects) to Lagos State Governor, Babatunde Fashola from December 2008 to July 2011.

was chosen the 15th Oniru of Iruland. The other princes in line for the throne were Prince Hakeem Ajasa, a serving Police Officer and Chief Security Officer to Speaker of the House of Representatives, Femi Gbajabiamila, and Aremo Adesegun Oniru, a former Commissioner for Waterfront and Infrastructure in Lagos State. Hakeem Ajasa is from the Abisogun house while Adesegun Oniru is the first son of the 14th Oniru.

On the 5rd of June 2020, Abdulwasiu Omogbbolahan Lawal was selected as the King. Babajide Sanwo-Olu, Governor of Lagos State presented the staff of office to Oba Abdulwasiu Omogbbolahan Lawal, Abisogun II on the 7th of June 2020 as the 15th Oniru of lruland. After the presentation of the staff of office by the Governor, he proceeded on a 3-month immersion in customary rites and emerged in the lru palace for his coronation as the 15th Oba of Iruland.

His coronation took place on the 6th of September 2020 at the lru Palace in Victoria Island, Lagos. In attendance were Oba Adeyeye Enitan Ogunwusi (Ojaja II), the Ooni of Ife and Oba Saheed Ademola Elegushi (Kusenla III) among others.