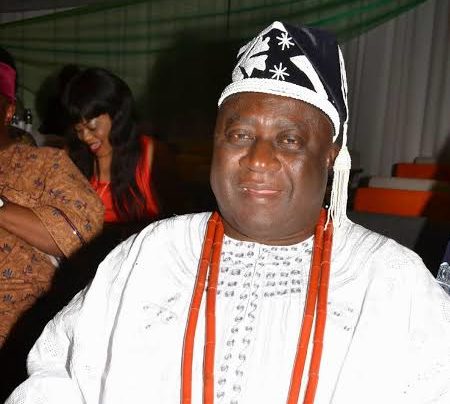 Zaki of Arigidi Akoko, Oba Dr Yisa Olanipekun is one of the popular traditional rulers in Ondo state. He is a very respectable man that loves to have people around him and he’s equally loved by many because of his generosity and philanthropic gesture.

It’s been 11years now that he ascended the throne of his forefathers, and he has done extremely well for the town.

Many of his good works are evident. And he also confirmed it in this interview with City People Assistant Editor/ Head of City People Tv, SUNDAY ADIGUN, who paid him a visit in his palace few days ago. In this exclusive interview, Oba Dr Olanipekun revealed what led to the rift between the popular Prophet TB Joshua and Aare Otunba Gani Adams, during the time he was to ascend the throne of his forefathers.

You will recall that there was a serious battle between the duo who are bonafide sons of Arigidi Akoko 11 years ago as to who becomes the king. Excerpts.

Recently, I was privileged to interview one of your chiefs, and he said a lot about you, how good you are to them, especially your contribution towards the progress of O.P.C. If I may ask sir, what really informs the kind of person that you are to people?

I’m Oba Dr Yisa Abu Olanipekun, The Zaki of Arigidi Akoko. Well, I was opportune to have something to do with O.P.C and the Aare Ona Kakanfo even before he became Aare. He was Otunba of this Community. The late Zaki installed him as Otunba of Arigidi Akoko. And he has been contributing immensely to Arigidi. He’s one of the best sons we have in Arigidi because he cares about this community. He really has time for this community. That is even before I became the Zaki of Arigidi. We travelled together when he started O.P.U. We travel together to different countries, and sometimes I do travel on his behalf. I remember I went to Sweden to launch the OPU in Sweden. That’s how close I am to O.P.U. All over Europe, they know me with him together and they know me as their father. That’s just it.

How did your relationship with Otunba Gani Adam start?

No1, his father’s mother comes from this palace. I knew him when we were doing a festival in Arigidi. I hadn’t been made king by then. He lodged in my Hotel. We do the festival every 9 years. That was how we knew each other. And when the Obaship happened, as I said earlier, he cares about this community. When the late Zaki passed on, he came home and he sent for me. We met at the hotel. He asked what my position regarding the kingship. I told him how much I’m interested it. He said “Egbon, I’ve done a lot of research on you, if this community will not make mistake and choose another person they will see in future that God chose you”. He called a man that day to consult the Oracle. That person has never seen me before, but the first word that came out of him after divination was “Kabiyesi ooo”. He said to Aare “Oga, Oba ni Okunrin yii”. That was how the journey started and he told me that he’s going to give me all the necessary support and he did.

He gave me cash up to 670k. The first time, he gave me a cheque of N250k, at times 60k, at times 100k. That was how it started. Then, he had meetings with Kingmakers on several occasions. Out of 10 Kingmakers that were there on that day, 9 voted for me that’s how we became close.

Kabiyesi, I heard there were lots of antagonisms before you ascended the throne of your forefathers. If I may ask, how many ruling houses do you have in Arigidi Akoko?

We have only one ruling house in Arigidi Akoko, which is Olanipekun family. Though, it’s a big family with many children. The first son of Olanipekun is my grandfather. We have Asunmo, we have Memudu (the grandfather of the boy that is disturbing me). After Olanipekun, they refused my grandfather because he has money, he has cows, he was very popular. They ganged up against him, even with some kings around. They believe my grandfather will ride them. In Akoko land, there is no child of Olanipekun that is not powerful. We have money. We have everything but we are not proud. I was already a millionaire under age of 30 years. So, the Memudus picked Asunmo. Memudu was annoyed because Asunmo was in Okitipupa, working with white people, they went and brought him. Memudu got angry and asked why him? He is in Arigidi and they went and bring another person from Okiti Pupa, so he did not accept him. He went ahead to do charm, and they told him that rain must not touch the charm, but in the process of making use of the charm, rain started. It started raining on him with the charm he became a lepper. Later he died and the son took over. After 8 days,  they gathered to pray for the deceased. Right there, they raised Asumo’s son’s hand up and that was how he became the king. Memudu’s son again started disturbing him.

Every one of us intervened but all our efforts proved abortive. This same man went to have a meeting with the opposition, and they agreed to burn the palace in order to drive the king away.

So, they connived and burnt this palace in 1967. The man ran to Lagos for 17years, before he returned back. He thought they would make him king, but he was later disappointed because the community rejected him; they said he’s a foolish man, he doesn’t know what he was doing. Later, the Government introduced due process, you can’t just carry anybody’s hand up anymore and declare him a king. It took me one year and some month to follow this due process before I became an Oba, and he went to court again.  For more than  10 years before I became an Oba, he’s been calling himself the next king in Lagos. His club in Lagos wrote a letter that he’s the one they want, but the community replied them that you can not sit in Lagos and come and choose a king for us here, and they started questioning his integrity.

When I was told to prepare for the throne, I started moving around. I started consulting all the Olanipekun family one after the other, to know if they really chose me or there is any other person that is interested again before I register my interest. Then, we started planning. Immediately I was announced they went to court. To the glory of God. I’ve beaten them 4 times in Court.

What were the strategies that worked for you?

There was no strategy,  just that his family can never become king in this community anymore because they have the blood of Leprosy in them, and it’s a taboo. That was what I told them in court. I told them what happened in 1978; How his father has been manipulating everything.

I brought out the file that contains all the evidenceand even their Lawyer. surrendered (laughs).

Kabiyesi, one of your sons, a prophet in Lagos was rumoured to have stood against you. Can you shed more light on that?

Yes, he was supporting them. It was a very big battle. Aare was supporting me, T.B Joshua was supporting them but I thank God today, now we are together. If you look at that place you will see the project going on there, he said he wants to build another palace for me, a duplex. He gave me 2 million to start, as you can see. We have done the foundation and you can see the block there. He also gave me this Range Rover, that is to tell you that we are together now. There is no month he will not send money to me. He’s very nice to me now.

Kabiyesi, looking at Arigidi Akoko, one can tell that there is peace in the land. How have you been doing it so far?

It’s God, and I give him all the glory.

How long have you been on the throne?

It’s 11 years now. Let me tell you something. Everything in this life belongs to God. When you have God, you don’t fear anybody. You just surrender everything to God. I don’t say a word when people abuse me. All what I plead for everyday of my life is peace. Everyday, I always think of how to develop this community. You can see work is on going everywhere. It’s my handwork. All the on-going road constructions is my handwork. I’m very influential. And when I’m talking to you, I’ll make sure you give me that honour straight away. That was how I was successful in business as well.

I spent a lot going to Abuja, to facilitate the construction they are doing there. There many other projects like banks, hospitals going on too, it’s just God. I always think of what will happen for good here.

What is happening in Arigidi now has never happened before.

How old were you when you ascended the throne of your forefathers?

What is the history of Arigidi Akoko?

This community is a very powerful community. In the olden days, Ilobu, Ilesha, different communities were here. Every evening, you would see light (Atupa) everywhere in the night. That shows you how busy the community was in the olden days. It’s just a pity that, all the community that surrounds us are evil to us, especially Ikare. Ikare people always carry sacrifice because of this community. It got to a stage I planted OPC at every junction, and they started driving them away with their sacrifice.

The age-long rifts within the Kingdoms between all our Obas were sponsored by them. I knew everything, why because there is no Zaki that is not powerful. Ikare people used to say they wish Zaki is their king. There are 4 places they must always stop me whenever I’m travelling and I used to give them money. I could remember in 1967, we connected Arigidi water but Ikare blocked it. Late Zaki was very powerful. He was a Chief whip in a house in Ibadan. He was very close to Akintola of Oyo. He always sleeps in this palace. He and other kings were controlling Akoko. In Akoko, we have 4 local Governments, Akoko North, West, East then Akoko South. Like I said, I’m very influential. I lived in Jos for years. I started selling vehicles in 1974. I’ve been seeing money when I was very young. I built my first house in 1978. I drive brand new cars. This is to tell you that, there is never a Zaki of Arigidi that is not powerful.

Many People Ran Away From Me When I Fell Ill 15 Yrs Ago – Movie Icon, OGOGO Recounts His Ordeal