Why VP OSINBAJO Finds It Difficult To Go Back To TINUBU 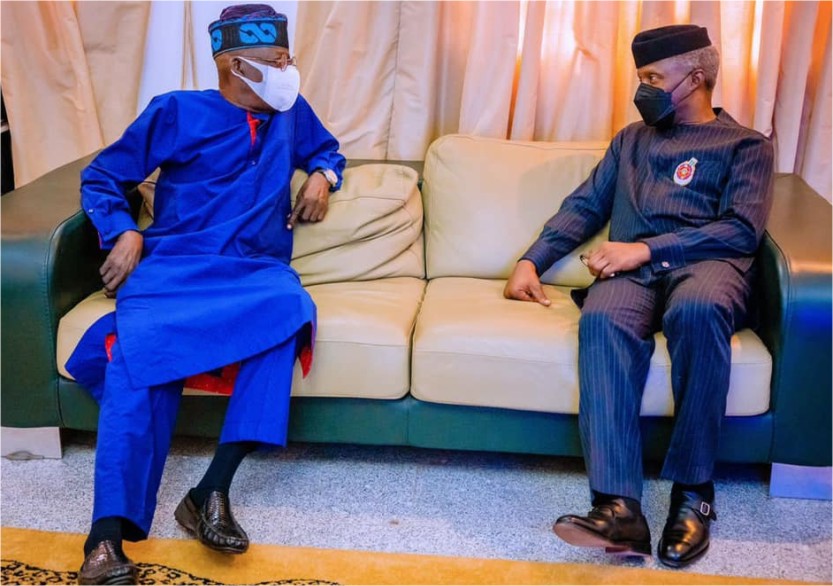 The vice president, Professor Yemi Osinbajo has been very quiet lately. Ever since his dismal showing at the recently held APC Convention where he lost out to Asiwaju Bola Ahmed Tinubu, very little has been heard from him. The only time he made anything near a major public statement was when he posted on his social media handle that he had just undergone successful knee surgery. He was even ‘gracious’ enough to disclose to Nigerians the name of the Lagos-based hospital where the surgical operation took place. Outside of this, nothing else in terms of a meaningful political statement or a show of public support for Tinubu has been heard from him or his media aides.

Unlike many of the disciples and loyalists of the APC standard bearer, Asiwaju Bola Tinubu, who have, in various ways shown and expressed their unwavering support for their leader and mentor, the vice president has been unusually silent. He has not come out to throw his weight behind his benefactor. And those who should know say that the silence has gone on for too long and that it could mean only one thing – the VP is still sulking after his defeat at the APC primary.

The possibility of this became more evident when the vice president’s absence at the Ekiti and Osun campaign rallies a few days before their governorship elections became conspicuous. Every notable member of the APC, especially those belonging to the Asiwaju inner circle, including Asiwaju himself, was there. But PYO was noticeably absent. This got people wondering, what could be the problem? Is the vice president no longer with the party or he is just not interested in aligning himself with Asiwaju anymore? Or, could it be he is looking to pitch his political tent elsewhere as was speculated not long ago that he was being wooed to join the Kwankwaso camp? So many questions begging for answers. City People can offer the answer to the puzzle.

According to an inside source close to the Asiwaju inner caucus, they are not surprised the vice president has found it extremely hard to reintegrate himself back into the Asiwaju inner circle. The source, a top politician who controls a large chunk of followers within Ogun State APC, told City People, “You don’t take the sort of political plunge the vice president took and not expect the doors would be shut against you in the end. Going head-to-head against Asiwaju for the APC presidential ticket was politically suicidal. Politically, I can guarantee you the man has hit a brick wall. I am only stopping short of saying he has been politically obliterated by that singular but costly action. Unfortunately for him, he chose the wrong person to stab in the back. It will never be easy for him to walk straight back into the fold afterwards,” our source insisted. But, why, we asked? Didn’t he and Asiwaju make up and buried the hatchet, if there was ever one when Asiwaju visited him alongside others who contested against him shortly after the convention was concluded? The top Ogun State politician shook his head.

“It is a lot more serious than that, it’s not something a one-off visit from Asiwaju will settle,” he explained. “Let me ask you if it was that simple, has anyone spotted the vice president with Asiwaju together anywhere ever since? It can’t be that simple. And don’t forget that a lot happened before the primary election took place. Party leaders, including elders of the party like Baba Akande and Osoba all, met together with Osinbajo and persuaded him to step down for Asiwaju but he bluntly declined. He told them it was his constitutional right to aspire to become the next president of the federal republic of Nigeria and that it would be unfair for anyone to try and stop him. He was so sure he was going to win the primary election and emerge the party’s presidential flagbearer. He was confident the president indeed had an anointed candidate in mind and that he was that anointed candidate. He was ready to slaughter all of his long years of relationship with Asiwaju and dismiss all he has benefitted from that relationship for his own personal ambition. He knew exactly what he was walking into. He knew the consequences of his actions. What people do not realize is that, when he decided to do what he did, betraying Asiwaju in that manner, it wasn’t Asiwaju alone that he betrayed, he betrayed every one of us, the followers of Asiwaju.”

“He was close to some of us the followers. Many of us reached out to him individually. Some of the governors reached out to him. But he told us his mind was made up. At some point, he was no longer picking up our calls. He would direct his aides to speak to us and tell us he was busy. From the very moment he declared to run for the presidency, he turned his back against not just Asiwaju but all of us. That’s why, when he attended that reconciliation meeting that took place a couple of weeks before the primary was held, he was clearly no longer comfortable being in the midst of the same people with whom he started his political journey many years back. He could no longer slap hands with them and throw banters like they used to do together because he knew he had crossed the line. He knew he had done something horrendous and there was simply no way he would come back into the fold and get a pat on the back for his cruel action. And if you know Asiwaju very well, people will tell you he forgives very easily. Perhaps too easily. But what about his followers, will they forgive Osinbajo that easily too? I doubt it very much. “

The top politician who himself obviously has not forgiven the vice president concluded, “Let us be honest with ourselves, what the man did was unpardonable. Asiwaju made him whatever he has become in life today. Every political achievement he has to his name was served to him on a platter of gold by Asiwaju. The office of the vice president which he currently occupies was meant for Asiwaju, but because of political calculations, the man offered him the office even when he had clearly not worked for it. And you now turn around to look at the same man in the eye and tell him you will stop him from becoming president, who does that? Take it or leave it, that is a betrayal of the highest order, and it will take him a long time before all of his sins can be washed away within the inner circle of the Asiwaju Political Empire.”

True to his words, it is indeed looking like it will take PYO quite some time to get back into the Asiwaju camp and earn their trust again. Nobody knows what his next move will be. He has not said anything yet about quitting the party and neither has he shown any visible commitment to Bola Tinubu’s presidential project. On whose side will the vice president be as the countdown to the presidential campaign begins? Will he come out openly to throw his weight behind Asiwaju or will he prefer to pitch his tent with another candidate from another party? And if he chooses to stick with the APC, how tough or easy will it be for him to rejoin the Asiwaju camp again? We are waiting, we are watching with our fingers crossed….

READ ALSO: WHAT MANY DON’T KNOW ABOUT PROPHET TAIWO OJO

Why VP OSINBAJO Finds It Difficult To Go Back To TINUBU was last modified: August 22nd, 2022 by Wale Lawal

What Many Don’t Know About Prophet TAIWO OJO