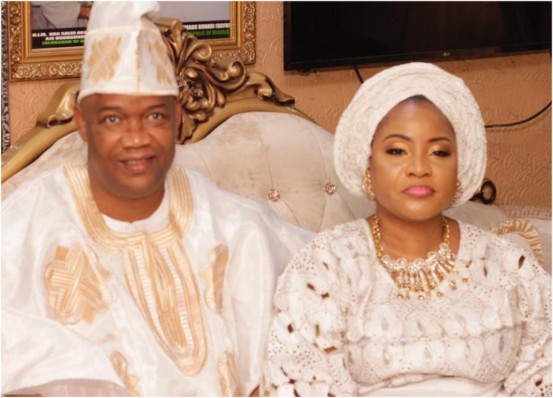 The renowned journalist and businessman was installed alongside other eminent sons of Ibadanland as Mogajis (family heads) of their respective compounds.

It was indeed a mini but colorful and classy ceremony. Family, friends and associates of ‘Bowale Oluwole Arisekola still turned out en masse despite the short notice.

From the installation proceedings at Olubadan’s palace to the family house where conferment rites took place and the reception at his Bodija residence, everything was well arranged. Apart from the unique reception at Bodija, there was also a special catering for the family at Ajenigi-Eye Compound, Yemetu-Oje, Ibadan. To say that there were enough to eat and to drink at the two venues would be an understatement. Everything was made available in abundant. Sumptuous food, both local and continental dishes were supplied by Sketch Catering Services. An Ibadan-based popular DJ, Secxy was on the wheels of steel, while Explicit Dancers gave a good accounts of themselves as usual.

However, while the party has been described as a superb one, the high point of it all, for many, was the sight of Mogaji ‘Bowale Oluwole Arisekola’s wife, Morenike. She was cynosure of all eyes at the party. She looked radiant and fabulous in her well-sewn iro and buba attire with designer shoes and bag that complimented the whole thing, as well as nice jewelries.

That was the first time many would be seeing the couple together at public function. Apart from the fact that Mrs. Morenike Arisekola is based abroad, she is naturally a reserved woman but always in touch with her roots. Her husband is her best friend and confidant. They have come a long way together and their love has continued waxing stronger by the day, having met and fell in love with one another as students at the University of Ife, now Obafemi Awolowo University (OAU), Ile-Ife years back. Their union is blessed with four lovely girls. Apart from the strong bond between the two, another thing they have in common is the philanthropic spirit. They are both philanthropists. The wife is the founder, Acts of Love Africa Foundation. She has inspired many and taken several others out of poverty through this foundation.

Meanwhile, Arisekola, a highly resourceful personality, is a journalist, publisher and entrepreneur who has diversified into other fields of business that include real estate, transportation, gaming, oil and gas and lately broadcasting industry. He’s so passionate about human development and capacity building. He has touched several lives positively and helped many shaped their visions. A good number of youths got jobs through StreetJournal Forum with Wole’s connections in high places. And this his generosity is not limited to his immediately environment, it cuts across other zones too. Some of his kind gestures also include donation of motorized boreholes to areas like Agodi Prison, Mele and Ejitolu, all in Ibadan. Same was extended to Kogi State and Akoko in Ondo State years. What about the renovation works at his alma mater, Lagelu Grammar School, Ibadan? During the COVID-19 pandemic lockdown, Wole Arisekola gave out palliative hundreds of people both in Lagos and Ibadan. Little wonder then that while speaking with journalists at his Bodija residence, shortly after installation ceremomy, Arisekola noted that his installation has further confirmed his people’s acceptance of his good deeds as well as his commitment towards the development of Ibadanland and Oyo State at large.

“This is just the beginning of greater things to come to my family, people, kinsmen, and Ibadanland as a whole. My plan is to consult wide and round my kinsmen in Yemetu-Oje to know what my people lack and how to cushion effect while working with the government to provide basic amenities. Already, I have been an active player in the development and growth of my kinsmen and Yemetu-Oje as a whole through my foundation. We have also, through the foundation and by extension, supported Ibadan indigenes, widows and less privileged even outside Ibadan and in the diaspora.”