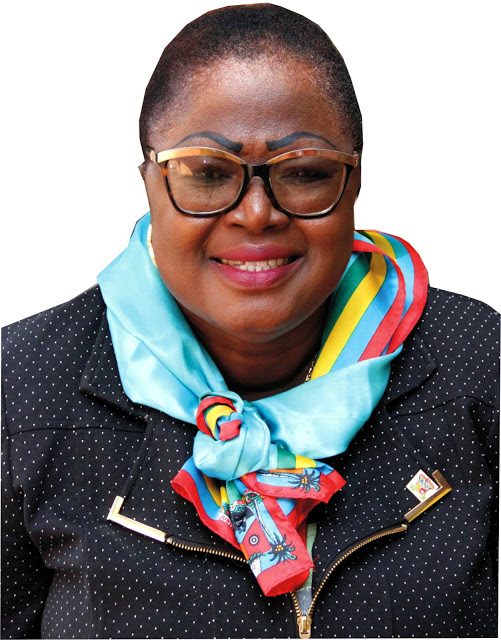 If you’re looking for one of the women in the movie sector who interpretes their roles well, then look no further than Yeye Aare Oyewunmi Esusu.Her name may not readily ring a bell like some of her colleagues that have adapted names from the various roles they acted, but Oyewunmi Esusu is surely one of the faces to reckon with in the industry.

Her prowess and mode of delivery has made her a sought after actress. She is black and beautiful. She speaks very well, though many don’t know she started as a Teacher in Lagos and rose to become a Director of Education, at the Lagos State Ministry of Education.

Her career into the make-believe world didn’t just start today. It started a long time ago. Just like other veteran actors and actresses who started as ‘alarinjo’ from different theatre groups, Oyewunmi also started from a dancing troupe. She nursed the passion until she became of age and her path crossed with veteran actor, Alhaji Adebayo Salami. popularly known as Oga Bello, who tutored her well enough to also become a face to reckon with in the industry.

You are one of the most respected actresses in the industry, but many don’t know how you started. How did acting start for you?

The journey started since the day I was a year old, because my parent when they see me doing anything they see the act of acting in me. When I come to the time of having my sense of belonging, I put on to go for theater art. That was in my NCE and University.

When I achieved my aim theoretically, I proceeded further to go and learn more practical under my father, my mentor, and inspiration so to say, Otunba Adebayo Salami, popularly known as Oga Bello. I made sure that I ran my entire practical course for 4 years despite the fact I learnt and read Theater Art.

Since then I’ve never seen any disappointment in my life because I dreamt of my career and I achieve it. In the theatre industry, there are so many aspects of life in it, which is very difficult for people to see, but to me since I know that acting is in me I find it very easy in no matter how tough it may be.
Let’s talk about your background, and at what age did you actually discover yourself?

I’m an Ijesha woman but I grew up in Oyo State. I was not exactly born with silver spoon in my mouth, but thank God my parents are educationist and I thank God for the way they trained me to this level. I have achieved my goal in education as a Director of Education.

More so, I was in Primary 6 when I discovered myself, even before primary 6, we’ve been going up and down for cultural festivals and all that, which I was the leader by that time.

When I was in secondary school, I was looking for ways to start acting, because we were doing dramatic society until one day Late Hubert Ogunde came to my school in Ilesha and I decided to run away with him. But my father sent me back that was in 1980.

After that, when I see people on TV acting, I used to feel sad, wondering when am I going to start too. In fact I used to curse myself that if I don’t go into acting my enemy will not die peacefully.

But the day my Lord showed me the way and the light through Adebayo Salami was when I acted as an old woman in my first film ‘Akobi Eledumare’, I was extremely happy and I vowed that I will not go back until the nation knows me, and thank God today, I’m one of the people that someone would say, this is an actor. So I’ve started since primary 6. I started with dancing troupe, we used to go to king’s house e.t.c. I have never been a failure up till my present moment.

Mere looking at you, watching and listening to the way you interpret your roles, one cannot but say you are very sound and knowledgeable, what is your educational background and what other things do you do aside acting?

After obtaining my primary 6, I went to a modern school for one and a half years before I crossed to Secondary school at Edunabon via Ipetumodu, Ile-Ife. In 1983, I went for my Grade 2, after that I started my career as a teacher.

After my grade 2, I went for my diploma course before I proceeded to obtain what we used to call Asoso by that time. Then I went to NCE at Ikere Ekiti, after that, I went for Cca- Cultural And Creative Art.

I then proceeded further to Ado Ekiti University to obtain my degree in Fine And Applied Art and I ended up in LASU to obtain my Masters in theatre art. I’m still in line of teaching presently as the Director Education, though I’m retiring this year by God’s grace.

If you are still practicing, how then do you juggle acting and teaching?

Because of my determination, I prefer not to sleep than not to achieve my goal. I used to beg my directors to fix me for Friday, Saturday and Sunday. I have never allowed one to hinder the other and I’ve been doing this as far back as 1997, and I’ve never experienced any obstacle. God has also been good to me in that regards too. I started appearing on television in 1997, but I started acting since 1980.

Looking at your success in both acting and teaching, what has life taught you so far?

Looking at the industry today and where you started from, would you say many of today’s actors are living up to expectation?

They are not up to the task. In as much as I have passion for this job, sometimes I still use Peter to rob Paul. I’m on level 17 now, with my salary, I run so many things. In our industry, despite the fact that many people are interested in the profession, money is not as such flowing in the industry some people don’t give us respect monetarily.

They don’t belive that it’s a job one needs to pay for, and when they pay you, they will give you a token, thinking that they’ve done you favour. Secondly, this piracy issue has rendered majority useless in the industry, but when you have passion for it, you will believe one day will be one day, you will make it.

What should we expect from your ma?

I just finished my production titled “sebe” (python). It’s in census board right now. By the grace of God in 2months to this time I will launch it.