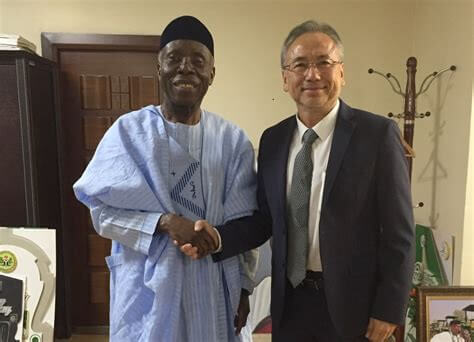 The Ambassador of Thailand to Nigeria, Wattana Kunwongse, has denied the claim of agriculture minister, Audu Ogbeh, that rice mills are collapsing in the Asian country.

On Friday, Ogbeh had claimed that Thailand said President Muhammadu Buhari’s policy on local rice sufficiency was responsible for the collapse of seven of its mills.

“Just like two weeks ago, the ambassador of Thailand came to my office and said to me that we have really dealt with them,” he said.

“But I asked what did we do wrong and he said unemployment in Thailand was one of the lowest in the world, 1.2 percent, it has gone up to four percent because seven giant rice mills have shut down because Nigeria’s import has fallen by 95 percent on rice alone.”

Journalists’ research also revealed that the minister’s claims were found to be false.

According to a statement published by Premium Times on Tuesday, Kunwongse said there is no proof of the shutdown of Thailand’s major mills.

The ambassador said that at the meeting, he praised the government’s Economic Recovery and Growth Plan (ERGP) and assured the minister of Thailand’s support in the field of agriculture.

“The report is not only misleading but a distortion of the actual conversation between myself and the honourable minister of agriculture at the federal ministry of agriculture and rural development on 30th January 2018, which was nothing short of positivity and optimism on both sides,” the statement read.

“During which I praised President Buhari’s Economic Recovery and Growth Plan (ERGP), the essence of which is the endeavour to move the country to a self-sufficiency and export-oriented economy, and to that worthy cause, Thailand stands ready to work closely with the Nigerian government in the field of technological transfer and agricultural machineries.

“At the same meeting, the honourable minister and I had reached the conclusion that I as ambassador of Thailand to Nigeria will be working closely with the Ministry of Agriculture and rural development to establish a platform to discuss our mutual benefits in the form of MOU on Agricultural Cooperation and by forming a bilateral Working Committee toward that end.

“There is no proof of any shutdown of Thailand’s major rice mills.”