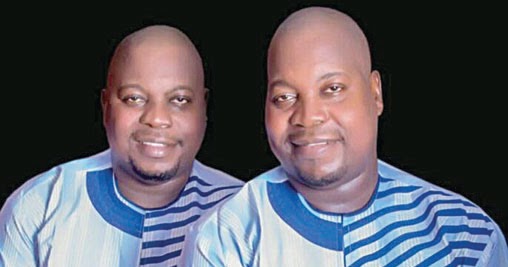 On Sunday 13th May 2018, City People Magazine hosted the Adegbodu Twins to a grand reception in Lagos for their remarkable contributions to gospel music. The musical event which was well attended by many gospel artistes, both old and new, took place at the much talked about City People Event Centre at Gbagada, in Lagos.

Kehinde & Taiwo, who looked respledent in their agbada were so happy, as many of their contemporaries filed in, one after the other. For those who still don’t catch the drift lets quickly tell you about the duo: The Adegbodu Twins. They are a gospel music duo who have been making waves in the industry for more than 2 decades. The talented duo were formerly based in Ibadan, Oyo State before they relocated to Lagos late last year (2017). They have several hit albums to their credit. They now have about 5 projects they are working on. “We are working on our new album and also on the video of our last album which we released about 2 years ago,” they explained. “We are also working on a film that is coming out soon. The movie is about the story of our lives. How we first started, and how God has been able to take us to the stage at which we are today”.

Their musical career started from church because their father had a Cherubim & Seraphim Church in Awe, Oyo State. Their mum was a Chorister. They grew up to join them. There was also a message before they were born that their parents were going to have a set of twins who will be musicians. They didn’t believe the prophesy until the Adegbodu Twins were born and they realised that it seems these are the twins they were told about.

Music started for them “from our days in primary school. So we started as kids. We were aged around 8 or 9 years old then they explained.” They released their first albun when they got admission to the College of Education. Because the Adegbodu Twins are well loved, a lot of gospel artistes stormed the venue. They include Seyi Harmony. Tanwa Special, Olajire Twins, Elizabeth Hephzibah, Tope Flourish, Adenike Fakunle (Omo Imole) and Prince Ojubiyi , Femi Solar came all the way from Ibadan. Others are Bisola Testimony, Omotola Jayeola Ohunayo, Ogeyemi Ogede, Aya  Onni, Lady Evangelist Opeyemi Esho.

The reception is part of City Peoples efforts to continue to recognize and celebrate talented individuals in the music industry. Over the last 10 years City People has hosted about 500 music and movie people, which include the likes of Evangelist Ebenezer Obey, KSA and many more magazine hosted the duo of Taiwo and Kehinde Adegbodu for their great and remarkable achievements and contributions to the Entertainment industry.

The event which attracted lots of gospel music lovers and stakeholders had in attendance important personalities , guests and The Adegbodu Fans Club members,who came from far and wide to celebrate with the twins.

Among the dignitaries that graced the occasion were ;Prophet Olabode,Pastor Niyi Peters, Agboola Adeola, Prophet Olabode Samiye, Ajibola Seye and many others. Mc Kirikiri compered  the programme with rib cracking jokes, afterwhich prophetess Folashade of the Cherubim &  Seraphim  church prayed for the successful hosting of the event.

Gospel artistes took turns to delivered special numbers in glorification and recognition of Adegbodu Twins. King of Zion music ,Apostle Debo Ojugbuyi became the cynosure of all eyes when he mounted the stage to do a Special Ministration and delivered soul lifting songs to the admiration of guests at the party.Other gospel artistes that delivered special numbers  were ;Adex Gold, Bukunmi Grace,Dele Harmony and Ogeyemi.

Speaking at the event, the elated  twins who share striking resemblance, said they were very happy to be hosted to the grand reception by Citypeople. They revealed that their success story in the music industry was predicted  long before their birth. They were full of praises for their parent who nurtured and trained them to become superstars.They admitted that their involvements in the choir at the Cherubim and Seraphim church in Ibadan has helped shaped their musical career.They both praised the name of the Lord who blessed them with singing talent.

The duo thanked  their teeming fans and urged them to continue to follow them, promising that they will never disappoint them. Taiwo and Kehinde Adegbodu mounted the stage and delivered melodious tunes amid celebrations and cheers from their fans.

If I Become President I Will Do 5 Major Things