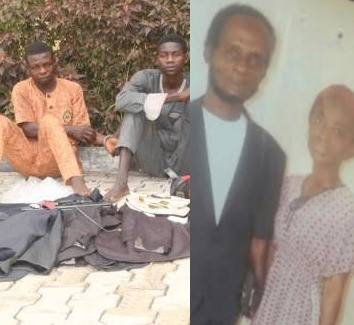 The Ondo state police command have arrested two security guards for killing their boss, 71 year old Kwakye Kwaku Richards, a Ghanaian, and his 27-year-old daughter, Kwakyw Tope, at his residence at Ojomo Akintan Estate on Ilesha/Owo expressway in Ondo State.

Parading the suspect before newsmen, the state Commissioner of Police, Undie Adie, said the suspects, Ayuba Idris, and Taisu Abubakar, both aged 20, were initially declared wanted by the police for killing the victims and were arrested in Kano and Sokoto states, respectively.

The suspects who are of Hausa and Fulani extractions, confessed that they killed their boss and daughter and dumped their corpse in a building in their estate. Their gross was that the man refused to pay them their 3-months salaries. Items found on them include mobile phones, laptop and clothes.

“The two suspects initially said they killed the 71-years-old Richards because he refused to pay them three months’ salaries. They, however, later recanted their claim by admitting that the deceased did not owe them any salary. They also said they decided to kill the daughter on the same day in order to cover their track since she saw them the day they killed her father” the police commissioner said

When interrogated, one of the suspects, Abubakar, blamed the influence of Tramadol and Indian Hemp, for their action.

“On that day, we took tramadol and Indian hemp and just decided to kill the man. While strangulating him, his daughter saw us, so we killed her too in order to cover up.”the suspect said

Stop blackmailing me, I have handed over to you- Okorocha replies Governor Ihedioha