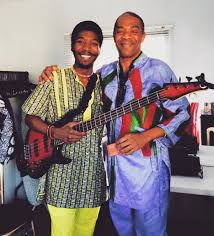 As hilarious as this might sound, Made Kuti, son of music icon, Femi Kuti has revealed some of the rumours he has heard about the Afrikan shrine which includes sacrificing people.

The latest member of Postive force band (Femi’s band) recently granted an interview to NAIJwhere he spoke about returning to Nigeria, religion and the shocking rumours he has heard about the shrine.

“Growing up in the shrine, I can’t tell you different because I didn’t know different, it was normal. My first shock of the shrine was the stigma it had when I started going to high school. I have heard some crazy stuff People think we sacrifice people at the shrine. I have heard that we kill people in broad daylight and worship them with gods or something, I think it’s a stupid rumour I have heard some really bad things.

“To me its home, i know everyone that works here and coming back i met new faces, i trying to meet everybody again. People think if the shrine as a place of worship but that not what this is, its a sacred place, that’s why my dad termed it this, I’m Fela, there is no god, I don’t believe in any god, not traditional, not Christian not Muslim or Scientologist, I have grown up very free minded,” he said.

Femi Kuti and son Made perform together

He went on to talk about what the Afrika shrine represents and how it is a place of equality where nobody is isolated or treated differently.

Made Kuti is the first son of Femi Kuti and he was recently introduced to the world by his father as the latest member of the Positive Force Band.

Femi Kuti’s son, Made Anikulapo Kuti is now a member of his Fathers “positive Force band. This was made known through a post shared on his Instagram page over the weekend, where he posted a picture of himself performing alongside his father at the Afrikan Shrine on Thursday night, September 6th.

The post had the caption, ”Another night of maximum energy at the shrine last Thursday! A great debut as an official positive force member!  Don’t miss the show tomorrow – Sunday 08/09/18!”

playFemi Kuti with son Made Kuti

Made Anikulapo-Kuti steps in as a replacement to Aghedo Andrew, a former member of the band and bassist who ran away minutes before the band was set to perform at the Summer Stage in New York, US earlier in the year.