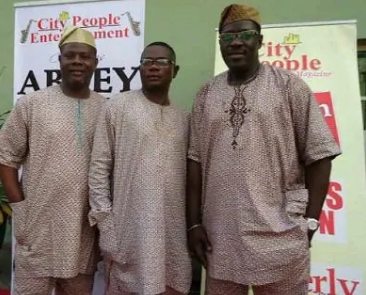 Veteran actor, Yinka Quadri is one of the highly respected actors-cum-film makers in the Yoruba movie industry. He started his acting career in the 70’s and has remained relevant in the industry He has featured in over 500 movies and still counting. In this City People Movie Roundtable interview with City People Editors,  he talked about how his journey in the industry started and how he met Ogogo, Abbey Lanre and Araosa over 35 years ago. Below are the excerpts.

How do you feel turning 60?

I like to appreciate you for your support and encouragement, if you notice immediately you called, I responded, because it was also past of my plan to visit you as well. So Uncle Seye, I appreciate you a lot for your love for us in the entertainment industry. City People is a nationwide magazine and we give God all the Glory for your love towards us. I also appreciate City People because they are not among magazine that write thrash about people, rather you help us build our images everywhere, and that is why I hold magazine in high esteem, so I give you all the kudos.

What is on your mind as you tun 60 years soon?

Thank you so much, being a Muslim and I came from a Muslim background. As a Muslim, we are taught that as you grow older, fine, it’s okay if we celebrate but in the real sense, it is not something that should be celebrated as such because as you grow older, also remember you are getting closer to your grave, either we like it or not, so to me, celebrating birthday is a way of giving thanks to God for keeping me.

I have seen people that didn’t make it to age 30, 40 or even 50. So to many people I will be celebrating my 60th birthday, but to me, I am just giving thanks to God for his mercies and grace.

So I just want to appreciate God for his Grace and I also pray he bestow more grace upon me. In life, if you are giving the grace to live above 50 years on earth and still not make it to God at the end, it simply means, the person doesn’t know what he or she is doing.

When you live below that age and you behave, people will say he or she is still a child, doesn’t know that he or she is doing and so should be forgiven, but the moment God gives you the grace to live above that age, living above 50 years, then you shouldn’t make mistake.  When God grants man long life. It is because he wants to look back and correct your mistakes and make amend then more move closer to you God. But as a human, if you don’t retrace your steps and live right, then it is left to him or her. It is just an opportunity to move close to your God.

So what plans do you have in celebrating your birthday?

God has given lots of opportunities and an grateful. If you notice, people call me Chairman here and there, honestly, I don’t know how I came about the name Chairman, but when God says yes, nobody can say No. I just realized that when we got to Odunfa, people started calling me Chairman. I have been the leader of my group.

“Adetutu” since 1980’ I started this job in 1977, myself Fatai Alabi popularly known as Adekanbi presently based in London, Apostle Biodun Majekodunmi, popularly known as Baba Kekere, he is in the U.S now and late Mustapha Majelu, we were all friends, we gathered ourselves together to start Theatre, I talked about the way I like people like Ade Love, who happens to be my mentor, each time I watch him on screen, he always motivate me. Fatia also shared his intentions, same applies to Abiodun and that was how we decided to form a theatre group in July 16, 1977.

At no 63 Moshalashi Street Obalende, for one year, we didn’t have any leader, we just started the group, later we were introduced to late Taiwo Olayinka, we were told that he has acted before under Sir James, who was a floor Manager in NTA 10, so we were advised to call him to come and lead us, and he agreed to be our leader and he changed the name of the group to “ Isale no group”. He trained us for good 2 years, he taught us how to compose songs, drama and every other thing and stage performance. In Dec 1980 precisely, he left us, he decided to form his own personal group and that was how we started our journey.

In 1981, we applied democracy, we voted between myself and Fatai Alabi, who is going to be our next leader. It was Taiwo Olayinka that gave us Isale Oro Theatre Group and he went with the name, when he left so we didn’t have choice than to charge our name again, and that was how we changed to  “Adetutu Theatre Organisation” And Fatai Alabi led us for the first 3 years 1981 to 1984, at the next election,

There was no home video then, and it is not easy to just go into another group and pick their members to take part in your production for those that don’t know, that is the reason, our veterans and  legends marry so many wives back then so they can feature them in their production.

Apart from Television programme, the only magazine available then was “Atoka”, so Television programme is the most popular then and if you are giving one slot for a programme on Tv, it is as good as winning a lottery. So I was very lucky to get a slot on Television I explained to Rasaq, so he was like no problem, that he has some friends at Ebute Meta, that I should come and talk to them he was under someone, and I see his boss like people I can’t even talk to that I need people from his group, he won’t even accept. Also my wife today also stays at Ebute Meta then, we met over there in 1985.

He brought Bintu Ogunjimi, Taiwo Hassan, Odua, Abbey Lanre, Fatia Adetayo and lots of others were under  “Awo Fabunmi who happen to be their boss, so Araosan sees them as his friends, so we called them, so we could work together, as at then Rasaq was living in No 38 Odunfa Str.

So it was his house we had our first meeting where I explained my Predicament to them and we saw ourselves to be in the same age range, they didn’t betray me, by telling their boss, they just followed me. By then I was doing a program on LTV 8 Araban, Karowi, Olaniyanu, I did all these programme back to back. Being a young guy, I was favoured amongst other producers then coupled with the fact that I was from a rich home, every end of the year. I get towels from the factory and share for people so people like me. So that was how we all became friends, but at the end.

It resulted into a big fight amongst ANTP members, I was even reported to late Baba Ogunde, that I took their members, even Taiwo Hassan and co had issues with their boss back then and they decided to from their own “Oodua Theater Group”.

Rasaq Ajao also had issues with his boss but they later settled their issues, so that, was has I met with them. So that was how we came together in 1985. There was also another guy called Kakawa, who stays at No 40 who is next to Rasaq Ajao’s house.

He inherited the house from his father and he gave us to be using for meetings and practice, so that was how we form Odunfa.  I will say Odunfa was formed by God, because we only came out the name from out meeting point.

So how did you guys come about the name Odunfa Caucus?

When Adebayo Salami, Prince Jide Kosoko, I Show Pepper intervene the issues I had with the other elders in the industry concerning taking their group members, I was asked to apologise, which I did, and everything settled. May God grant I Show Pepper eternal rest, he suggested that the production, I took their members to feature in, we should all come together and use it for stage performance, that was the very first time artistes merged together which has never happened, and they all agreed. So all these stars, late Ray Eyiwunmi, Adebayo Salami, Jide Kosoko, Ishow Pepper and others came together.

And that was how we all featured in  “Olaniyanu” we realized it pulled crowd.

So, after that we decided that every month, each group will produce and feature other members, and that was how inter group relationship was formed.

And it was after a year of regular meeting at Odunfa Street, that we decided to name our group Odunfa Caucus.

I Never Knew I Could Become Somebody...

Why Producers Always Cast Me For Crime...