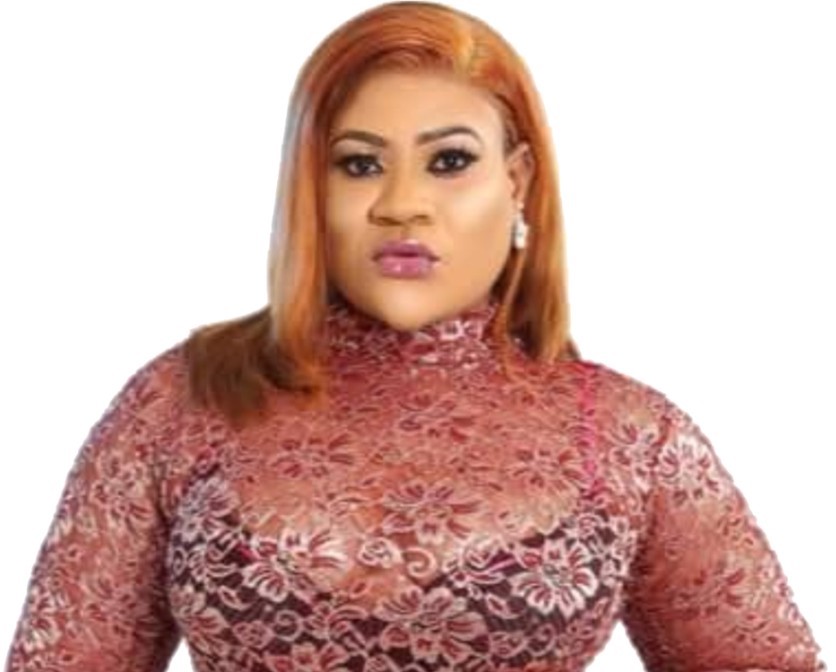 Thursday, 14th February, 2019 was all about the sexiest, beautiful, elegant and award winning actress, Nkechi Blessing Sunday. She celebrated her 30th birthday in grand style.

It was a remarkable day for Nkechi Blessing, considering the turnout of dignitaries, top notch celebrities and well-wishers that stormed sidewalk lounge to celebrate the grace of God upon her life.

There is no better way to describe her than “Omo Ologo” as she’s fondly called.

Looking at her journey in life, and her career, one cannot but say, it has been by the Mercy and Grace of God, because she’s one of the most sought-after actresses in the Nollywood industry today. Despite the fact that, she is an Igbo girl, her ways of interpreting and delivery of her lines mostly in Yoruba movies has been so powerful.

So hot is she that 80% of all the Yoruba movies that come out every week, feature Nkechi and she has won several international recognitions and awards for what she knows how to do best.

She was born in Surulere, Lagos 30 years ago. She schooled at Olu Abiodun Nursery and Primary School, Lagos State before she proceeded to Barachel Model College, Lagos. She holds a six month’s certificate in Theatre Arts from Lagos State University with a degree in International Relations from Houdegbe North American University, Benin Republic before she returned back to Nigeria and join the make believe industry which she has become one of the voice to reckon with today.

Her first movie “Omoge Lekki” that was scripted by Nollywood actress, Mercy Aigbe shot her into limelight. Since then, she has featured in many movies. City People SUNDAY ADIGUN was at the birthday celebration and brought you gists from the party.

Popular Sidewalk Lounge, situated at 80, Awolowo way Ikeja came alive on this very day. The Lounge, which is located inside Trinity Mall was filled to the brim and was beautifully decorated with the touch of Gold and Black. People around Awolowo way will not easily forget the influx of dignitaries that stormed the venue. They include Hon. Wale Ahmed, the Lagos APC Secretary, Idris Aregbe, Youth Organising Secretary Lagos APC and many politicians.

AND THE RED CARPET WAS COLOURFUL

The 30th birthday celebration of Nkechi was recorded as one of the best events ever hosted in 2019, probably because she is loved by many.

The red carpet was one of the beautiful moment we can’t but talk about. It was so colourful and well decorated. The back-drop on the red carpet carries the portraits of the celebrator and actually added colour & class to the red carpet.

The moment we waited for finally arrived. As the celebrant steps in triumphantly. She wore a beautiful black dress with the touch of Gold embroidery that have ruffles by it tips.

Though Nkechi Blessing is 30, but she doesn’t look it a bit, her skin was glowing like that of a baby, and she swept many off their feet with her triumphant entry into the lounge where 100s of guests were already seated waiting for her arrival. The ovation was so loud. She was accosted by her bouncers, family and friends as she steps on the red carpet for paparazzi.

ABOUT HER BEAUTIFUL OUTFIT

To say Nkechi Blessing was only beautiful for the event was an understatement. Blessing was one of the God’s Angels assigned to the planet earth on her birthday. Her first dress was a beautiful black dress with the touch of Gold embroidery that have ruffles by it tips. It was made by Modiorkors Later she changed to a beautiful Long shimmery red dress to dance. Her 2nd outfits was done by Soft Touch Couture. She looked smashing in the 2 dresses, and that made her the cynosure of all eye.

ABOUT THE CELEBRANT’S CAKE

There were lots of cakes from friends to the celebrants, with different inscriptions on it. Those cakes were so beautiful, and it show she is loved by her friends, fans and well-wishers. Her cake was done by Olufemiakannicakes.

SEUN BANKOLE WAS ON THE BAND STAND

Seun Bankole, one of the fastest rising Juju singer was the musician of the day. He was in total control of entertaining the big boys and big babes that came out en-masse to celebrate the icon, Nkechi Blessing.

NKECHI BLESSING WAS A PERFECT HOST

The event lasted for about 8 hours and it was 8hrs of fun, but the energetic Nkechi Blessing didn’t look a bit tired. She played host to all the guests till the end of the party. This is because by nature Nkechi is 100% fun-loving. All she wanted to do was to have fun and enjoy her party. She is a humble, caring, loving and down to heart person with a good heart.

There were enough varieties of foods to eat with assorted drinks and wine to complement it. Everyone was extremely happy to be part of the birthday celebration of the sultry actress, Nkechi Blessing Sunday.

It was an array of beautiful and sophisticated babes from all walks of life. NBS@30 red carpet witnessed a massive turn out of big babes, and they added colour with their different outfits. Some of the celebrity friends of Nkechi Blessing did not disappoint at all, they all looked glamorous, and there outfit came out nice on them. Many stunned in different lovely dresses while many did justice to nice and expensive tops.

Popular philanthropist, Peju Kokun, the CEO of Kokun Foundation that caters for the needy, expecially those that cannot afford to put food on their table. Food is right for everyone is his slogan. Kokun Foundation as fondly called is popular and many people have been blessed through his foundation. He was at sidewalk to honour Nkechi Blessing, dressed in his blue outfit, Kokun Foundation dazzled and Blessing was so happy to receive him.

Maya award boss, Ademola Moreklue was at the event NBS@30. The young man was seeing along side the popular comedian, “the call” movie crooner, Woli Arole, spraying money on the celebrant. And they also cracked some jokes while dancing.

Popular business philanthropist, extremist and Brand Ambassador, Somto was also at the party. He is one of the big boys that loves Nkechi Blessing and what she represent. Somto shows lots of support to her.

BELLE OF THE BALL EVENTS DID WONDERS

Among the big boys that stormed sidewalk lounge is Badoo of London, a brand, event and media consultant. Surprisingly Badoo of London came all the way from London to support his Paadi, Nkechi. Also, popular Digital Marketer & Entertainment Guru, Big Sam also was on ground and he supported the celebrant.

DC Father and Nkechi Blessing Sunday are very close. In fact you will think they are dating each other when you read or listen to their conversation. DC Father couldn’t make it, but was ably represented by his amiable and beautiful wife, Nifemi.

Miss Dior is the CEO of Modior_Kors, a fashion house strictly for ready-to-wear bridal and training. Obviously she is the brain behind Nkechi Blessing first dress, the black dress with gold. She also commended her for a job well done. “I did not even tell you my theme colour, yet you came through with this drop dead gorgeous dress. Thank you so much.