Home News Inside BENIN Church Where Oba Of BENIN Is G.O
News

Inside BENIN Church Where Oba Of BENIN Is G.O 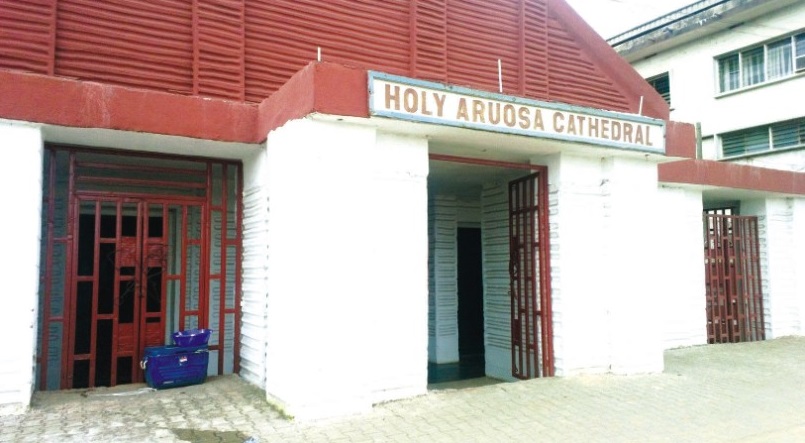 Holy Arousa is a unique church in Benin city, Edo state where Christians, Muslims and traditionalists worship together under the spiritual leadership of the Oba of Benin.

Along the ever busy Akpakpava Street,in the ancient city of Benin, the Edo State capital, stands a concrete building housing the Holy Aruosa Church where Omo N’ Oba Ne Edo Uku Akpolokpolo, Oba of Benin, worships. The Holy Aruosa is a combination of English and Bini word. Holy as it implies means to be pure while Aruosa is a place or site of worshipping God. According to sources close to the church, the Holy Aruosa was founded in 1506 during the reign of Oba Esigie.

The Church, said to be the oldest church in Africa, was established by the Portuguese before they started the Roman Catholic and other churches. Today, it is common to see tourists from America and Europe visiting the church. The purpose of their visit is to come and see the first church in Nigeria because according to them, they have seen that the establishment of churches in Nigeria have been expanding.   Holy Aruosa is a traditional religious and unique worship place where the Oba of Benin, Omo N’Oba N Edo Uku Akpolokpolor, Oba Erediauwa , his palace chiefs , family members including men and women of Bini origin commune directly with God.

The Oba of Benin is the spiritual head of the Church, and sometimes referred to as the G O while the heir apparent to the throne, that is the Omo N’Oba’s first son is number two and the Chief Priest of the Holy Aruosa is number three. All others work with the priest.

Holy Aruosa is the religion of the Binis, headed by the Oba. Its entire activities are centred on Bini language, but over the years the prominence, growth and proliferation of Holy Aruosa whose geographical spread once cut across Edo state, Cross River, Western parts of Nigeria and indeed, parts of Dahomey ( present day Republic of Benin), was adversely affected by western civilization and the Nigerian civil war. 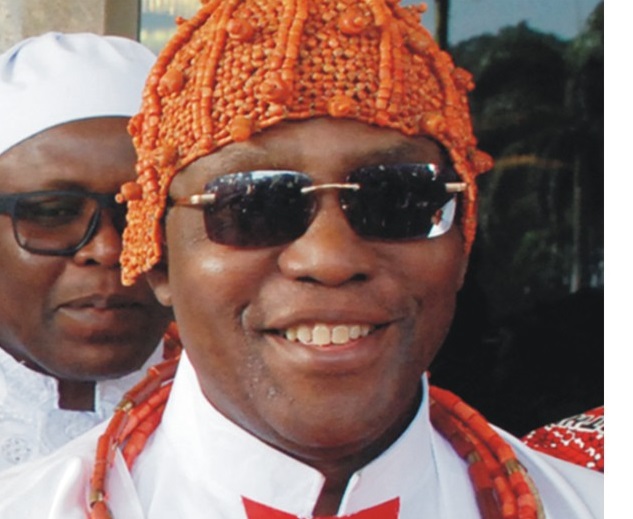 Besides the gross impact of the British expedition of 1897 which prompted the eventual expulsion of Oba Ovorawmen N’Ogbasi to Calabar, it also had its ripple effect on Arousa. However, it was subsequently rebuilt by Oba Akenzua when he ascended the throne in 1933. So many branches were subsequently, equally reconstructed in Benin, Port Harcourt, Onitsha and as far as Dahomey.

Many historical versions over the years gave divergence views about the origin of Arousa as religion. The British according to world initiative for peace, a non-profit organization, in its 5th world conference on Religion and Ethnicity with a special reference to the Portuguese, Ancient Benin Kingdom and the Romania churches as case studies, has it that Holy Aruosa was founded by the Portuguese in 1406AD.

According to Col. Paul Ogbebor (Retd.) counselor and Chairman Board of Trustees (Arousa), who vehemently contradicted the position of World Initiative of Peace, opined thus, “it amounts to saying it was when the Spanish got to America that was when America was founded. The Portuguese came for commercial and religion treaties, they only came to complement what we have. Before their advent, we had a very disciplined and strong religion. They took our priest to Portugal, but the difference is that, we go directly to God, while the Christian pray through Jesus Christ. We are not Christians. We are goodies. We deal directly with God.

According to him, so many years ago, Edo people experienced strange happenings, man’s inhumanity to man outlived its bound. Spurred by three fundamental questions and request: that the young ones should not be dying before their elders, the need to continue to have rain throughout the season and that the dead should be able to visit the living, Okhuahe, a Benin priest volunteered to take the message to God. Although several years later, God spoke, unfortunately the above requests could not be granted as they tend to violate the natural law which says there cannot be witness of any person who have seen God on earth. “But where the Binis gathered, praying and awaiting the return of Priest Okhuahe, is the present site where we have Arousa.

On a comparative dichotomy between Arousa and contemporary religion, Col. Paul said, Arousa is more imparting, Christianity has nothing to do with Benin culture, but Arousa is Benin. You cannot see five percent of Binis who live 100 percent by Christian doctrines, is rare. But Arousa is Benin culture. Before most Binis go to church they pray to shrine to keep their homes’’

Reacting to the diminishing prominence of Holy Arousa in the contemporary society, the chairman board of trustee explained, “the British expedition affected Arousa, there were insinuations and accusation that we were fetish. Being a spiritual institution, Arousa was demolished. Arousa went underground until Oba Akenzua now started rebuilding, most of the shrines that were affected. Unfortunately, the civil war did the most damage. The snare waves of Christianity and finally the government took the missionary school that was a big blow to Arousa propagation.

On his part, Royal Priest Harrison Okao (JP), Senior Presiding Priest of Arousa who shared similar opinion with Col. Paul on the origin of Arousa said Aruosa is a rallying center for Christians, Muslims and idol worshippers. “We are not against any religion, but we are concerned with the state of the mind”.

A product of ministry pastoral school institute, USA and worldwide ministry, Priest Harrison stated that the Oba is responsible for the appointment of the priests through inspiration from God. Defining his specific role in Bini kingdom, he said both himself as priest of Arousa and Chief Priest of Benin, Chief Nosakhare Isekhure has a duty to protect the Oba. “I pray to God on behalf of the Oba, while Isekhure pray to ancestors on behalf of the Oba.

The Oba’s wives are not under my jurisdiction. No Oba’s wives come here, but we only pray for them’’ However, women who are mostly the choristers are allowed to worship freely without inhibition, as they communed freely with Osanobua (God or creator) without any intermediary according to the Chief Priest.

We do not pray through Jesus Christ or any other intermediary. It is not that we do not believe in him, but the truth is that we pray directly to God. “If you have a father and you also have a brother and you want to ask your father for something, do you pass through your brother? That is why we do not pass through any intermediary and instead, go directly to God to make our requests. “During the prayer session, I ask people to come out and talk to their God and say or ask whatever is paining them, which they want God to do for them. There is a specific time during every worship service when such people will come out to cry to their God. To me, it is one of the best sessions in the entire service.”

The prayer every successive Oba offers at the worship site ensures the success of the kingdom and its inhabitants as a whole. God has been answering our prayer. Here, we pray for barren women, jobless youth, our children—that they have the fear of God and grow properly; we pray for our market women and others generally. So, being a place of true worship, and of prayer for good things, Holy Aruosa is a very important place to the society here.”

The priest went further, “we start the day’s service with an opening song otherwise known as “Ohenosa muegbugie. After that, we say the opening prayers before we pray for the Oba of Benin, we pray for the heir apparent to the throne, which is the Omo N’ Oba’s first son, we pray for the other Oba’s children both at home and abroad, we pray for the palace, the chiefs, the government of the day, starting from the president, the governors, local government chairmen, councillors and others in the position of authority.”

Okao added that they also pray for good things to happen in the Benin Kingdom and the state while concentrating on members present while we individually ask God for whatever we want from him.

Another wonderful feature about the Holy Aruosa is the choir which is made of elderly people otherwise known as the Edion Ni kao nomadode meaning the elders that will never go astray.

There is also the Chiefs Group, the Wardens’ Group, Youth and Children’s group. And Aruosa N okao, Osagbemwenorue, Ikiede and Ohen Nogu Osawe group as members of the church. These groups are for effective coordination of the church’s activities.

The difference between Holy Aruosa and the orthodox church is the mode of worship and belief. Okao explained that: “If you are talking about the fear of God, the Holy Aruosa members have the fear of God and we have it in our creed that if you sin against mankind, you must go and beg that man and if you don’t go and beg that person, you will receive punishment on earth and after death, you will receive the punishment. That is why we don’t commit sin.

He disclosed that the church doctrine is against adultery because it is wrong for a man to sleep with another person’s wife and it is equally wrong for a woman to leave her husband’s house to go and sleep with another woman’s husband. It is wrong and so anybody that does this will not see the kingdom of God. But as a member of the Holy Aruosa church, if you want to marry more than 20 wives, the church cannot say no but would advise that you give them equal love but if you cannot share equal love with all of them, you have to hands off. So the idea of having a wife at home and maybe two or three concubines outside is a sin.”

Another feature is that the church has its own book of worship like the Bible. The difference is that it is known as the Book of Holy Aruosa and was written by the “wise men with the dictate, teachings and sayings of the ancient Benin kingdom.” It is made up of the dos and don’ts that fore fathers bequeathed to the present generation. Okao explained further that the book is just like “the Old Testament in the Bible and if we have anything or any area that we want to refer to in the Bible, we do so, we also refer to the Koran for things to move on properly”. The mode of worship in Aruosa follows the pattern of the Catholic.

Though in those days, there was no drumming in any church but drumming started in Holy Aruosa and a white Bishop in Lagos then, criticized Aruosa saying that is not the way to serve God. The case even went to court but today, every church drums and sings. The ordination of the Chief Priest is done in the church after the confirmation from the Omo N’ Oba being the head and the selection. It mostly a spiritual exercise.

Inside BENIN Church Where Oba Of BENIN Is G.O was last modified: May 13th, 2018 by Bunmi Mustapha

I Was Under Serious Pressure To Become OLOTA Of OTA