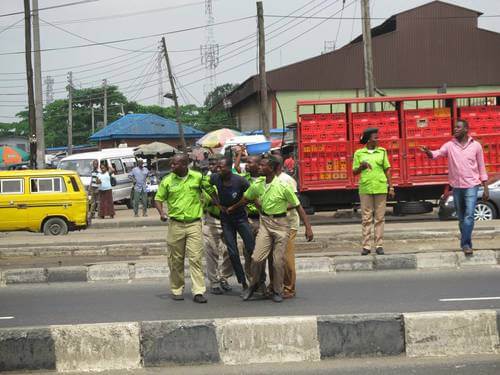 In order to achieve improvement in health for residents of Lagos State, the Government has scrapped Kick Against Indiscipline (KAI), replacing it with Lagos Environmental Sanitation Corps, LAGESC. KAI officials at work The move, according to the State Government, was part of the new environmental management policy encapsulated in the Cleaner Lagos Initiative, CLI, aimed at reforming Solid Waste Management Sector of the State.

Speaking at the launch of CLI held at Agege Stadium, Lagos, the State Governor, Akinwunmi Ambode, yesterday, said that the development would drive the State to the desired future of achieving clean, hygienic and flood-free environment. The Governor, who was represented by his Deputy, Mrs. Idiat Adebule, said the initiative was an enduring solution carefully designed to address the shortcomings experienced in managing the State environment, as well as accelerate seamless cleaning of the State.

“As a result, residential waste collection and processing which is concession to a reputable and competent multinational Waste Services Company is being given a new lease of life with 600 brand new compactors and 900,000 electronically tracked bins, while wastes generated by the commercial sector would be handled by licensed waste management operators (PSP).”

Earlier, Commissioner for the Environment, Mr. Babatunde Adejare, disclosed that 920 LAGESC Corps personnel, marine waste collection facilities and mechanized sweeping, was a dream come true in the implantation of the new environmental initiative, just as he expressed confidence that the development would translate to improved health and quality of life for residents of the State.

I made more money when I was overweight, says Lepacious Bose