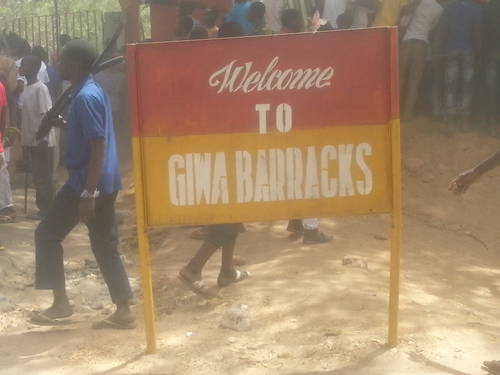 At least 61 Boko Haram suspects detained at Giwa Barracks in Maiduguri, Borno State have died as a result of heat, meningitis, and other harsh conditions, according to report.

Eight deaths were said to have been recorded, on Wednesday, after the military authorities released

593 about detainees to the Borno state government, others happened earlier.

The bodies of the deceased were taken to the morgue of the State Specialist Hospital, which is said to be overstretched.

The military therefore ordered the State Emergency Management Agency (SEMA) to conduct a mass burial for some of the corpses, which were in the hospital’s morgue.

Members of staff at the morgue resisted the bid to conduct a mass burial for persons with no autopsy and little or no records — but the orders of the military had to be carried out.

A source at the hospital said that based on the hurried evacuation and burials, the cause of the deaths could not be verified but added that “majority of the deaths were said to be due to the heat in the military facility, while some deaths were tied to meningitis”.

A senior military source said one of the deceased was actually killed three days ago, by “some soldiers and his eyes was almost removed”.

He however added that “all the soldiers that were on duty were arrested while the military command set a committee of inquiry into the issue”.

Many of the detainees have been kept by the military for more than one year, with no form of prosecution.

Efforts made to reach Sani Usman, spokesman of the army, on the 61 deaths did not yield the desired result as he did not respond to calls and text message.

As of May 2016, Amnesty International said 149 detainees died in horrendous condition at the Giwa Barracks, which it called “a place of death”.

Before then, the human right agency, also raised alarm about the death of 640 Boko Haram suspects detained at the camp before an attack in 2014.

“After more than nine months in office, President Buhari must take urgent action to provide justice for the conflict’s thousands of victims and prevent such violations occurring again,” Amnesty International said in 2016.

“In the two years since the Giwa killings, the pattern of unjustified use of lethal force by the military has continued with no one held accountable,” Netsanet Belay, Amnesty Advocacy director for Africa, said.

“From Giwa to Zaria, from the north-east to the south-east, the time has come to break the cycle of impunity that has gripped Nigeria. This should start with justice for the Giwa 640.”

Responding to Amnesty’s claims, Sani Usman, the Army Spokesman, said “the allegations are far from the truth and Amnesty International knows this”.