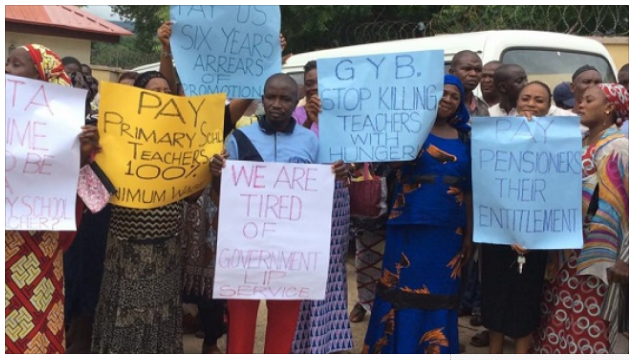 Labour unions comprising of the Nigeria Labour Congress (NLC) and the Trade Union Congress (TUC) have said that Kogi state workers have been reduced to beggars by virtue of being owed salaries and allowances “for a period of three to twenty-two months”.
The unions expressed shock on the suicide of Edward Soje, a director in the state civil service.
Soje, whose wife recently welcomed triplets, committed suicide after being owed 11 months salary.
“Workers are walking the streets of Lokoja like beggars because their salaries and allowances have not been paid for a period of three to twenty-two months by the government,” the state TUC and NLC said in a joint statement.
The statement signed by Olakunle Faniyi and Kolawole James, state secretaries of NLC and TUC, called on the Kogi government to publish the names and the amount being owed cleared workers and pensioners in the past 21 months.
Onu Edoka, state chairman of the NLC, has appealed to workers in Kogi State not to see suicide as a way out of the current hardship imposed on them as a result of non-payment of their salaries.
He said the wife of the director who committed suicide had not yet been informed of his demise.
NAN reports that a source close to the family said a team of pastors and relations who visited her at an Abuja hospital to break the news were advised by the management against it due to her state of health.
Edoka said many workers and pensioners had died due to non-payment of their salary and pensions by the state government.
According to him, many workers in the state have had their ailments aggravated as a result of lack of salary.
He said high blood pressure and diabetes had become common among them.
Edoka said organised labour had started compiling statistics of workers and pensioners that have lost their lives in the last one year, adding that figures of victims would soon be made public.
The NLC chairman called on President Muhammadu Buhari to come to the aid of workers in Kogi by sending foods, drugs and other relief materials to them through the National Emergency Management Agency.
He also pleaded with the presidency to set up a fact finding committee to come and ascertain the true situation of things with workers in the state.
The chairman expressed displeasure with the state government for taking to the pages of newspapers to publish the names of workers and their salaries.

SEE ALSO: ‘MY BROTHER WAS BURIED ON FRIDAY AND DAVIDO WAS NOT PRESENT’, TAGBO’S BROTHER