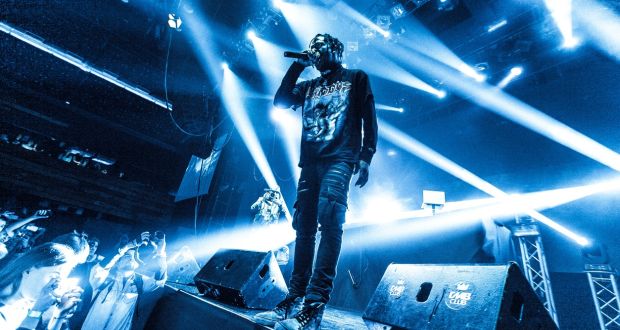 Rapper Travis scott has released new album Astroworld overnight amid controversy over the artwork. The long-awaited album includes 17 songs featuring a roll-call of who’s who of top talent: Pharrell Williams, Frank Ocean, Drake Tame Impala, The Weeknd all appear on the album credits.

The song Carousel features Frank Ocean, while Drake appears on Sicko Mode. Pharrell Williams is credited on Skeletons, with Tame Impala – aka Australian musician Kevin Parker – as producer. Canadian singer, songwriter, and record producer The Weeknd guests on Wake Up, with Quavo and Takeoff from rap group Migos credited on Who? What! British musician James Blake is credited on Stop Trying to Be God and a duo of stellar artists , John Mayer and Thundercat, perform on Astrothunder.

There were rumours that Stevie Wonder plays harmonica on a song called Stop Trying to Be God. Scott thanked Wonder and Phillip Bailey in a tweet following the album’s release.

Scott’s previously released single Butterfly Effect is included on Astroworld, as is Stargazing, and a song he has performed live .

Scott (27), who has been dating reality TV star Kylie jenner for more than a year, posted artwork for the album on his Instagram, which has more than one million likes. However, it was greeted with criticism for the apparent removal of a model, who is transgender, from the image.

The singer, who recently performed as a headline act in Ireland at Longitude festival, has not responded to the criticism.

New York City-based model Amanda Lepore posted on he Instagram that she was disappointed her image was removed from the image Scott shared.

“It was great being part of @david_lachapelle’s incredible photograph of @travisscott’s album [sic] cover but I’m curious why I’m not on the picture @travisscott posted.”

She later updated the caption to say:

“A girl can’t help it! Too distracting for the eyes! Upstaged everyone in the photograph!”

Why Davido Deserves Alot Of Accolades In...

R Kelly Admits To Having Sex With...

Those days in Lagos

Madonna turns 60 after groundbreaking career of...