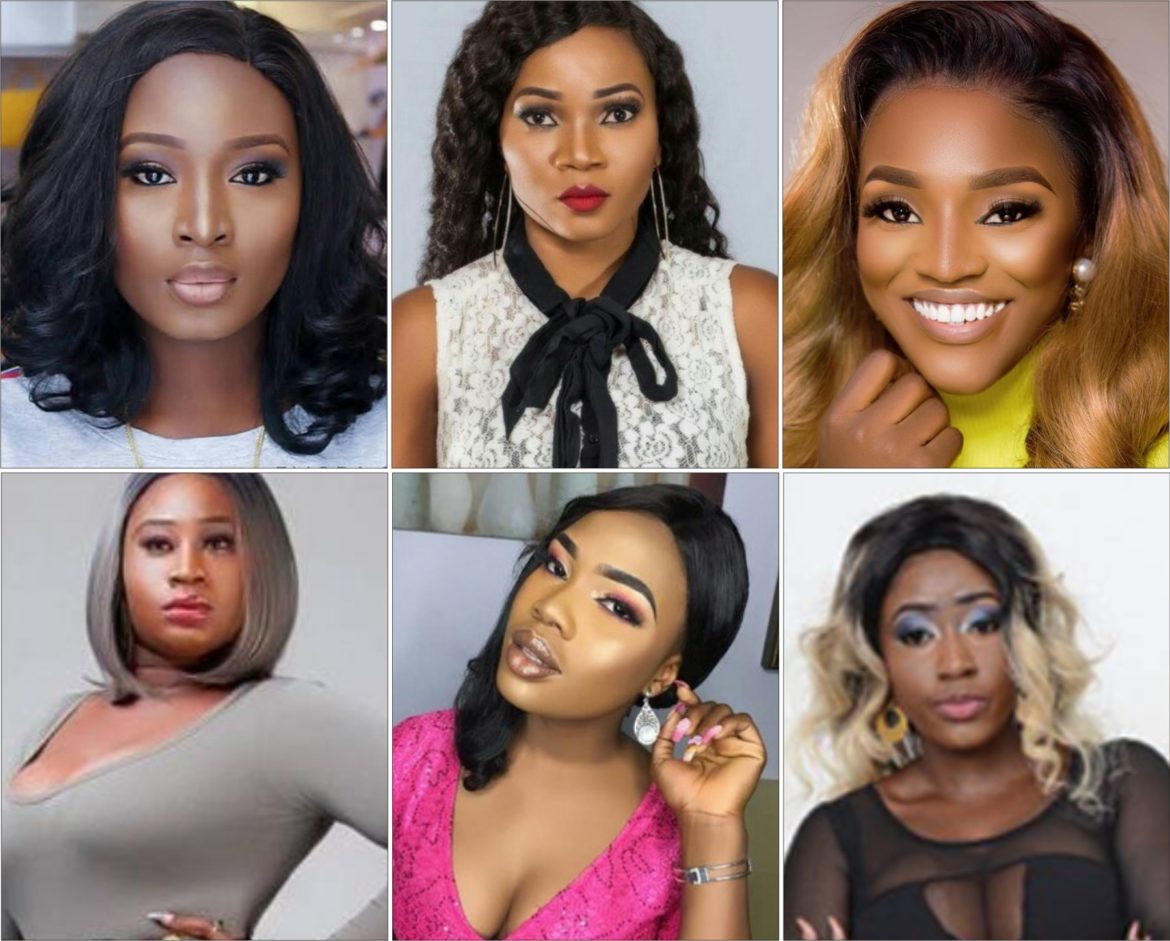 They are the definition of beauty and brain. When it comes to roles interpretation they fit into any role and interpret so well. These beautiful and highly talented ladies have done so well for themselves in the Yoruba movie industry. They are young, beautiful, talented and currently rocking the Yoruba movie scene. No wonder Producers can’t do without featuring them in their movies some of them are also movie producers and fans are always looking forward to seeing their latest movies, and this also explains, why they have lots of followers on Instagram.

Besides being fantastic actresses, they are beautiful and blessed with flawless skin. They turn heads at events and parties.

Bukunmi Oluwasina, no better name that can come first on this list, than that of Bukunmi Oluwasina. She is an actress, singer, scriptwriter,  model and movie producer, born in the early ’90s.

This young and beautiful star has achieved the success that some people could not even dream about in their old age. She is a graduate of Theatre Arts from Obafemi Awolowo University. Her first movie titled “Ayomi’ written and produced by her shot her to the limelight, and since then, she has remained at the top of her career without looking back.

Jumoke Ajoke Odetola is an award-winning actress, model, scriptwriter and movie producer, born in her late 80’s. She started her acting career with English language movies where she starred in lots of television series. Her script interpretations and delivery are excellent. Her role in the movie titled  “Binta Ofege”, which she starred alongside Femi Adebayo shot her to the limelight. Jumoke commands lots of respect in the industry amongst her contemporaries and superiors because of her talents and humble nature.

Adebimpe Oyabade, popularly known as Mo Adebimpe started acting in 2016. She started up as a model before going into acting. She is a graduate Of English at Ekiti State University. Bimpe is beautiful and very talented and this stands her out of many of her contemporaries in the industry.

Her role interpretation is also second to none.

Adekemi Taofeek is also an actress and movie producer. She’s a graduate of Business Administration from Lagos State University. Kemi started acting with the English movies before joining the Yoruba movie industry in 2012. Her movie titled “Baby Mama” shot her to the limelight. Kemi is beautiful, talented and very hardworking, shooting movies back to back and also running her personal business.

Debbie Shokoya, she is beautiful and one of the hottest babes presently rocking the Yoruba movie scene. She is very hardworking and has made it to the top through her hard work and dedication. She is very loved in the industry due to her talents and humble nature. She joined the industry in 2010 through  John Olakunle Dasilva Caucus and has remained at the top of her game….

Black, bold and beautiful Yetunde Bakare is one of the prominent Yoruba young actresses in the industry.

She started acting in 2009 and has featured in movies such as Iyawo Teacher, The Circle, Amisu, Awalu goes to school, Omo Olodo and has produced a good number of movies too.

Peju Johnson relocated to Nigeria from Eqypt and has featured in movies like “Omo Cairo” Baba Esu in Egypt, the law of Karma amongst others. Besides her acting skills, she is very beautiful and currently the president of  “The Sweet Girls Association of Nigeria”.

Funmi Awelewa is model, movie producer and comic actress. She has introduced into August in 2013 by Sola Kosoko. She has featured in over 100 movies and produced a good number of movies too.

Funmi is beautiful and hardworking and has been able to carve a niche for herself in the movie industry.  She is also popular for her comic roles in movies.

Victoria Kolawole, popularly known as  “Omo Gaga’ is beautiful, talented and producers delight anytime. She began acting after joining Mr Latin’s group, in 2011. She is exceptionally good at interpreting roles and being blessed with a gorgeous look and flawless skin stands her out.

She has produced movies such as  “Omo Gaga, Abike Standing, Eniyan Dudu amongst others and has featured in over 100 movies. Oloruntimilehin Bukola popularly known as Kiitan Bukola and also the CEO of Kiitan supermarket started acting in 2011. She is a graduate of business management in South Africa.

She joined the movie industry fully in 2018 and her role in the movie titled  “Kiitan “ Shot her to the limelight.

Tonia Okoro Ferrari is of mixed heritage. Her mother is from Cameroon and her father from the Delta State of Nigeria. She is a graduate of Accounting at Yaba College of Technology Lagos. She quit her banking job to join acting.

Her role in the movie  “Angele” and “Omotoke Gold” shot has the limelight. She is beautiful and very talented.

Mariam Ayomikuleyin Akande, popularly known as “Omovc” is a graduate from Lagos State University. She has featured in lots of movies such as  “Apayan Eda and lots of others. She also produced the movie titled  “Omo VC” which shot her to the limelight. She has featured in movies alongside big names in the Yoruba movie industry.

Abolanle Abdulsalam, joined the movie industry in 2005 as introduced into the scene by the late Alade Aromire. Her role in the movie “Kosenitoye” shot her to the limelight. She is happily married.

Titi Adeoye is an Ibadan based actress, singer and scriptwriter. She started acting in 2008 when she joined Mr Latin production and has featured in lots of movies. She is very beautiful and interprets roles perfectly Awele Odita, is from Delta State and was born in Asaba, but grew up in Ogun State. She bagged HND in Mass Communication from Abeokuta Polytechnic Ojere, Abeokuta. She joined the movie industry in 2008. She welcomed her sin with Kokozaria in 2017. Ayonimofe Onibiyo is among the young stars rocking the Yoruba movie scene. Her role in the movie “Aolat” where she acted alongside star actor Odunlade Adekola shot her to the limelight.

She has equally featured and produced in lots of movies.

Bose Oladimeji started acting in 2009 uncles the movie director Adebayo. Tijani Theatre group and got her first role in the movie. “Owe Akala” She produced her first movie “Oniduro and has starred in numerous movies such as Fifehanmi, Bamitale, Eyinju Eledumare amongst others.

She has also produced lots of movies with several awards at home and abroad.

Ifeoluwa Olawale is a fast-rising Yoruba actress; she is popular for her role in the movie “Amu Idunnu”. She got into the industry through Kemi Korede. She is beautiful and very skilful.

Abidemi Salako, she is among the wave-making beautiful actresses in the Yoruba movie industry, she is also a makeup artiste. She has produced and featured in a good number of movies.

Hannah Adejoke is tall and beautiful a graduate of Business Administration from Moshood Abiola Polytechnic, Abeokuta. She has been in the movie industry since 2013. Her role in the movie titled “Omolewa To Potch” shot her to the limelight.

Olusola Idowu, one can’t mention names of top young leading ladies in the industry without mentioning Olusola Idowu. she joined the industry in 2005 after training under Honey Entertainment Caucus own by Ganiyu Quadri, and ever since. She is been shuttling from one location to another.

Jumoke Aderonmu became famous after featuring in Funke Akindele’s “Jenifa Dairy”.  She is equally famous for her movies in the Yoruba movie titled  “Okun Ife Yi” in 2007. She is beautiful petite and very down to earth. She features in both English and Yoruba movies. Though her small stature has limited her roles in the movies industry Jumoke is still a leading lady amongst her contemporary.

Bimpe Adeboye is popularly known as “Aweni”, she is no doubt, one of the hottest young stars, rocking the Yoruba movie scene in Ibadan. She joined the movie industry in 2013 after training under Bogunmbe movie caucus in Ibadan. She has featured in lots of blockbuster movies and also produces movies as well.

Haleema Lawal is a product of J15 School of Performing Art, founded by star actor Femi Adebayo. Haleema is beautiful and maintains a very low profile, she has been featuring in blockbuster movies back to back.

Motunrayo Olawuyi is popularly known as “Omotola Young” by fans and colleagues. She started acting at a tender age but started acting professionally in 2004 with English soap operas, before detecting into the Yoruba movie industry. She is blessed with beautiful and brains and interprets roles perfectly.

AISHA Ibrahim is among the younger pretty actresses rocking the Yoruba movie industry. She is a graduate of Theatre Arts from Lagos State University. She started acting in 2006 and has since remarried at the top of her career.

Kemi Stone, she is blessed with brains and beauty, and figure to die for she joined the mum. Industry in 2007 and through determination carved a niche for her in the industry.

Dupe Odunsi is an Ibadan based actress who joined the movie industry in 2002 and trained under Lagelu movie caucus in Ibadan, Oyo State. She is pretty and turns heads at every event. She featured in movies back to back.

Bukky Adekogbe Raji popularly known as I Aminatur Papapa” joined the industry professionally in 2011. She is currently rated among the young actresses rocking the Yoruba movie scene; she is married to an actor Lukman Raji.

Yetunde Aderibigbe joined the movie industry in 2012 through a friend she trained under Neehas Production headed by Omogoriola Hassan. She has featured in over 50 movies and still counting. She is talented, sexy and beautiful, which is part of her selling point.