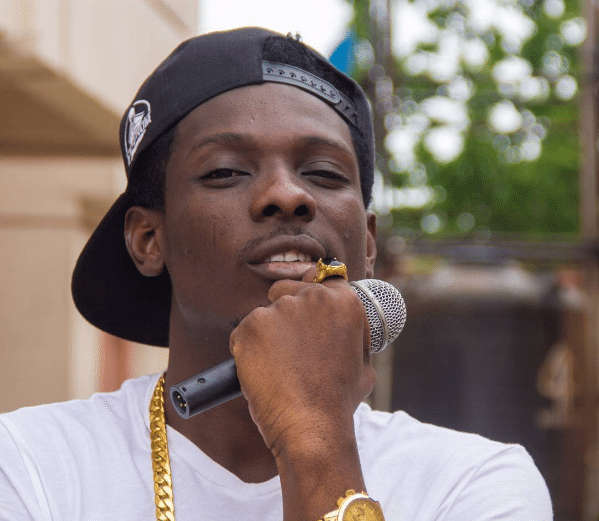 Everyone calls him Terry Apala. But that is not his real name. His real name is Ejeh Alexander Terry Oghenerobo. Last Thursday, this Apala Hip Hop Star, Terry Apala stormed City People Magazine Corporate Office at Gbagada, Lagos to receive his award plaque which he couldn’t collect last year during the City People Music Awards.

After collecting his award, he spoke to City People team on how he came up with Apala Hip Hop.

Share with us your thoughts on the award you just picked up?

I feel blessed for an award like this to be given to me. It shows the world is listening to my sound and they appreciate it. Shout out to City People for recognizing my sound, it takes a lot of hard work to put this out. May God bless all the staff and publisher of City People Magazine, Mr Seye Kehinde.

I was a drummer in church, then I was not doing music fully due to church activities. I grew up listening to African sound not even Apala but the likes of Papa Wemba and the rest of them, so in 2007 when Musiliu Ishola’s album came out I picked up from there and funkyfied the Apala sound and made it more urban so that the younger ones could relate with it and I called it Apala hip-pop gang.

So you said you played drums, tell us about the church?

It was a Pentecostal Church in Mushin, just a normal boy playing music. Then the music wasn’t the real deal, I was just praising God until I met Annie Macauley, 2face’s wife and I started doing soundtracks for her movies then. I won a competition and I started going for shows which I performed alongside Orlando Julius in 2000 then I picked up from there and I went places.

What kind of music were you doing before you started the Apala sound?

I started doing Rap. I listened to more of DMX and other African sounds, I stopped doing Rap and I got into singing but after I met Annie I sat down and talked to myself that there are many artistes singing so why don’t I just do something different which was me arriving at the Apala sound. I started with Ise Oluwa, an old version of Ishola’s song.

My kind of music is not something you listen to for the first time and you like because I have performed in different shows and people will be wondering what I am doing? At that time I was not doing it my own way, I was just doing a remix of Ishola’s songs.

Until when I mixed English with the Apala sound people then started understanding me. No note can be played in Apala music, it has just one note and it takes a lot of hard work but thank God I am there.

when I mixed English with the Apala sound people then started understanding me. No note can be played in Apala music, it has just one note and it takes a lot of hard work but thank God I am there.

How did you cope because it is really not easy for a young man to do Apala?

Actually, at that time, a guy of my age couldn’t feel me because I was sounding very old school until I added the 2pac kind of sound to it.

How has the reception been?

It has been very well, we thank God for the last 5 years compared to 2019 and now we are making waves and we are getting there.

What were the challenges you faced?

The challenges were many, I will not lie to you because even right now there are some shows that they don’t call me because the industry is filled with cheating and they feel this kind of sound is not meant to be heard in such shows. Or do I say because of the ShakuShaku style that has taken over and all but you know, don’t let us go into that now.

So what would you say has been the high point for you after all the challenges?

One of the highest points  for me was when I got a call from Ooni of Ife and apart from him, so many Oba have called me to grace their events. I am currently trying to seal a deal with MTN, they want me to remake all the songs on Ishola’s album.

Do you have any low moments that made you feel really bad?

At all, I have never had any.

Which of your jobs would you describe as your biggest work?

For me its still Jangolova because its still making waves outside Lagos and internationally. My other songs are only heard here in Nigeria but Jangolova is everywhere and I still get calls to perform that song.

What are you currently working on?

I am currently working on my album which is about to drop in few weeks. I was actually supposed to drop a single with Burna boy but due to some management issues it has to be in my album. On the album I have Falz, Burna, Niniola, some international acts are also featuring on the album.

Are you in any record label?

No, I am not in any record label, I am in a management team called Apala Gang and my guys are Mikky, Kido, Vadoman. This 2020 we are coming out very big

So everything you are doing right now revolves around Apala?

Sure, I and Baba Ishola are working on a project. I am doing this with Baba because that’s my god father in industry.

Tell us about your first meeting with him?

In 2015 I went to Ibadan to shoot one of my videos and his sister came to the set and I never knew who she was. So she was like Taniomo ton korin Apalayi? And she was like she would have to call Baba and when she did Baba was so surprised, saying he thought he was the only one doing this, that they should give me the phone and I spoke to him.

And he asked where I came from, I told him I was not from Lagos and it got to him more and he said I had to come and see him. A week later I called my camera guys, we went there and we did a documentary and the same day we recorded a song. Then he said, “I have over 12 albums can you mention 9? I shocked him and I mentioned 9 and he was so happy and we started having a father and son relationship since  them.

Why I Decided To Fuse APALA With Hip Hop Music – Terry Apala was last modified: February 17th, 2020 by City People

Why Celebrities Are Scrambling For Land At SIMAWA