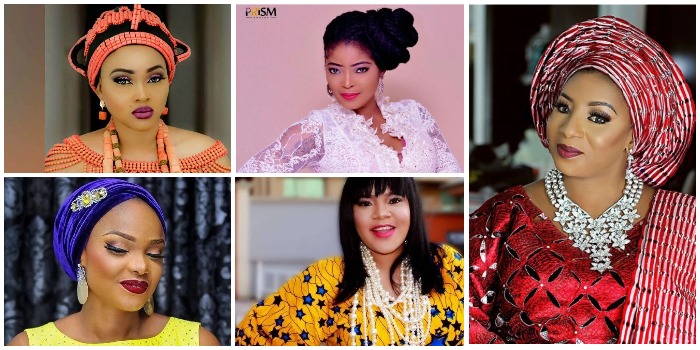 They are hot, pretty, intelligent and above all highly talented. They are the complete definition of beauty and brain. Despite not being in the industry for too long, they have been able to create a niche for themselves in the industry, and gradually becoming a household name.

People love to watch every movie they feature in, while some of them are equally very active on social media platforms. Some of these beautiful ladies feature in movies back to back, and this also stands them out amongst their colleagues in the industry.

The past years have been extremely busy for some, while others took a few months away to have babies and take care of other pressing issues, but fully back to do what they enjoy doing, and lots of their fans are patiently waiting to see what they have in stock for 2020.

She is gradually becoming the most sought after young Yoruba actress in the movie industry. She is an actress, singer, musician, movie producer, playwright and model. The beautiful young star has achieved so much success that some people could not even dream about in their old age. She is one actress to watch out for in 2020. She has over 10 awards in 2019, home and abroad for her role interpretations in movies.

She is popularly known as Mo Bimpe, is one of the highly-rated pretty faces in the Yoruba movie industry. She interprets roles perfectly and trust me, lots of movie producers don’t joke with her. She is not just a pretty face, but also a fantastic actress.

She started modeling in February 2016 and also started her acting career in December 2016. And has featured in over 100 movies and still counting with lots of awards for her exceptional role interpretations in movies.

Yetunde is one of the fast-rising actresses doing so well in the Yoruba movie industry. She started her career as a model and played minor roles in stage plays before she decided to go into acting properly in 2009, through the help of Yomi Fash-Lanso. She is beautiful, highly talented and fans love to watch her on the screen and this year won’t be anything different.

This beauty queen turned actress has become a delight to watch on the screen lately. She started her career as a model and has won pageants such as Miss Olokun, the most beautiful girl in Abuja and she is currently Miss Tourism 2019, and she combines all this with acting and has managed it perfectly. She has loads of projects on grounds for 2020 and fans can’t wait to see what she will be dishing out.

This curvy actress rose to fame after starring in the movie “Iwakiwa”. She is a versatile actress and also very playful. Wunmi studied Linguistics at the University of Ilorin and also had a diploma in Theatre Arts from Odunfa caucus. She has featured in over 150 movies and has produced close to 10 movies.

Seyi joined the movie industry in 2009 through her younger sister, and also debuted in her sister movie titled “Eja Nla” in 2011. This beautiful actress might not feature in every movie on your screen every day, but she remains very active in the industry, most especially on social media, and many tend to be interested in her case. She is equally not relenting, as she has now opened a new business to her line of business.

Tawa is another beautiful actress who joined the movie industry in 2003 and graduated in 2006 and she is best known for the movie “Okun Ife Yi”, “Opin Ireti” amongst others. She remains one of the most sought after young actresses in the industry. She is one actress to look at for in this year. She is popular for producing blockbuster movies.

Tonia is of mixed heritage. Her mother is from Cameroon and her father from Delta State in Nigeria. She left her banking job for acting. Her roles in the movies titled “Angela”, “Omotoke Gold”, shot her to the limelight. And ever since she has remained at the top of her career with so much to offer.

She is popularly known as Omojinad. She’s an actress, producer and television host. She started acting in 2010 after graduating from Double-A Entertainment in 2010, and through hard work and dedication, she has carved a niche for herself in the industry. The skit she does on Instagram with her song has equally made her relevant in the industry and gained more followers on Instagram.

Biola can be described as a private person in the entertainment industry. Her works always tend to speak for her. She is an award-winning actress-producer and TV presenter, and popular for the movie “Eyin Oka”, which happens to be her stage name till date. In the last few years, every producer desire to feature Biola in their movies. They tend to appreciate her skills more.

Last year was an extremely busy year for Biola, featuring in movies back to back, and collecting awards home and abroad, and there seems to be no slowing down with this talented and down to earth actress, as lots are in stock for her.

Folorunsho is blessed with beauty and brain and got the magical touch in interpreting roles and it blends perfectly well with her acting attitude. She has won several awards in the course of her career, and there is no looking back, as she keeps getting better by the day.

Beautiful and mother of two, Bukola, is one of the talented actresses in the movie industry. Despite having a baby last year, she didn’t let it slow her career down, as she keeps shuttling from one movie location to another. She was introduced into acting in 2008 after joining Odunlade Adekola Films Production (OAFP). She equally rose to prominence after starring in the movie “Sunday Dagboru” by Odunlade.

Call her the most controversial actress in the Yoruba movie industry, then you are not far from the truth. Nkechi is very talented and blunt, and this has made lots of people love her. She features in both English and Yoruba movies and has remained a household name. Besides featuring in movies back to back, Nkechi is very active on Instagram and this explains why people are always looking forward to seeing what her next step would be and she is also one of the most followed Yoruba actresses in the movie industry.

Funmi was introduced into acting in August 2013 by Sola Kosoko and has done well for herself in the industry. She is an actress, model, producer and fashion designer who also designs for most of her colleagues in the industry. She is one actress fans can never get tired of, mainly because of her unique way of interpreting roles and the blend of comedy.

Jumoke became famous for her impeccable performance in the movie titled “Binta Ofege”. This beautiful and intelligent actress started her movie career in the English movie industry before moving to Yoruba movies. Lots of producers love to work with Jumoke because she interprets scripts brilliantly and she does that in both industries and this explains why she is one of the best in the industry and loved by lots of people.

This beautiful actress became very famous after a sex scene she acted alongside actor Gida in a movie titled “Alagbere” went viral. And according to her, she has no regrets for playing such a role, because she was just been professional, and that is what acting entails. Peju is a talented actress and has lots inside for the world to see and appreciate her talents.

Aisha, pretty Kano born actress, Aisha is currently rocking both the Yoruba and the Kannywood movie industries, featuring in both industries back to back, she is not just a pretty face in the industry but a talented actress.

This beautiful and curvy actress is popularly known for her role in the movie “Addict” (Baraku) alongside Muyiwa Ademola. She is a banker turned actress and fits into any role perfectly. She is blessed with good looks and this attracts lots of people to her. She is presently one of the most sought after actresses in the industry featuring in both English and Yoruba movies. She joined the industry in 2014 through Kayode Adebayo’s group and debut into the film industry with her first time “Timutimu”.

Olajuwon is a beautiful and well-endowed actress known majorly for her roles in the Yoruba movies. Her role in the movie “21 Days”, brought her to prominence and has since featured in over 100 movies and still counting. She is presently the Vice-Chairman of Tampan Lagos State Chapter and she is sure carrying her duties perfectly. And she is one actress fans should watch out this year with her skills and role interpretations.

This pretty babe once revealed that her chest and leg are the driving force that makes her attractive to men all time. Trust me besides all this, Tope is a beautiful actress, and a delight to watch any time. She always gets lost in every character she plays, making it look as real as possible, and this makes her different and outstanding in the industry.

She is one of the finest actresses in the industry featuring in both English and Yoruba movies back to back. She had her baby last year, and this took her time from the make-belief scene but Bidemi will definitely be doing what she enjoys doing this year because acting tends to be in a bloodstream with a father and sister in the same industry.

She started her acting career 17 years ago with Kannywood and she is popular for featuring in blockbuster movies such as “Emeka Laafin”, Omo Mala and lots of other. She is often described as an easy-going and reserved actress.

Ayomide is one of the prominent Yoruba actress endowed with beauty and talents. She joined the movie industry in 2010 through a caucus in Abeokuta before relocating to Lagos in 2011. She has featured in lots of movies such as Soko Soja, Tani Were, Egungun Eja, Omo Oloja and lots of others.

She joined the movie industry in 2005 through the late Alade Aromire. She is not just a regular actress with a pretty face. She is indeed blessed with beauty and brain. You can’t help but admire her looks and talents on the screen all the time, despite the fact that she enjoys keeping a low profile.