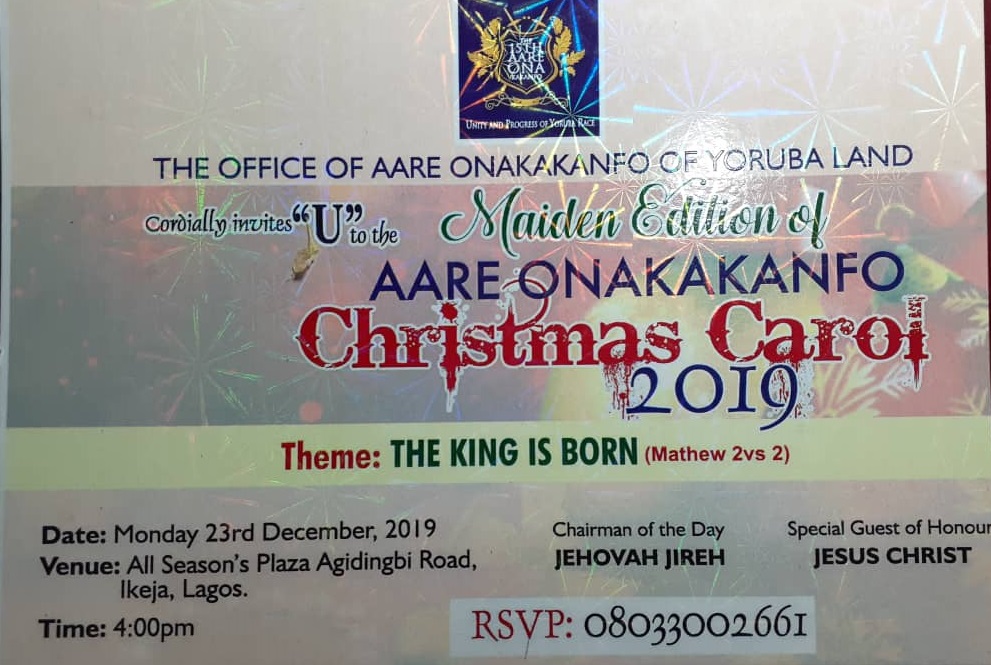 According to the invitation, the Chairman of the day is Jehovah Jireh and Special Guest of Honour is Jesus Christ.

The news of lba Gani planning to host the Carol has come to many as a big surprise because many don’t know he is a Christian despite the fact that he was born a Muslim.

City People Online can authoritatively reveal that the Aare practices the 3 major religions.

He associates with Christian’s, Muslims and traditionalists.

When City People Online asked him why he decided to host Christmas Carol he explained that it was to show how liberal he is when it comes to the issue of religion.

“I am very liberal when it comes to the issue of religion, he explains.

“I was born a Muslim. My wife is a Christian and I relate with traditionalists. I associate with everybody. I don’t discriminate. “

“Do you know that I have been to RCCG Redeemed church headquarters at Ebutte Metta to worship with them. And I spoke to them there. I was invited and l accepted their invitation.

“I also associate with Muslims. Every year l hold Ramadan lectures to promote the Islamic faith.

The traditionalists are not left out. I relate with them. Many don’t know this “.

Truly so. Before now, many thought he was a traditionalist. This is because of his involvement in OPC activities years back.

Some think he is a Moslem because of his name,Gani.

But City People Online can authoritatively reveal that he is truly accommodating of all faiths.

When City People Online visited him early this year at his Lagos home, we saw a huge portrait of Jesus Christ in his living room with a Hail Mary rosary hung on the wall.

When we asked him he explained that his wife is a Christian and he supports her.

Iba Gani has gone to Genesis Global church before for thanksgiving after he was made Aare Onakakanfo.

As a Muslim he has gone to Mecca before. He has also been very supportive of traditionalists.

That is his nature. He likes to carry everybody along with him.

He has friends from different faiths. His Xmas Carol promises to be exciting and refreshing. He told City People Online matter of factly that all the various denominations should come together and worship God so as to promote unity.