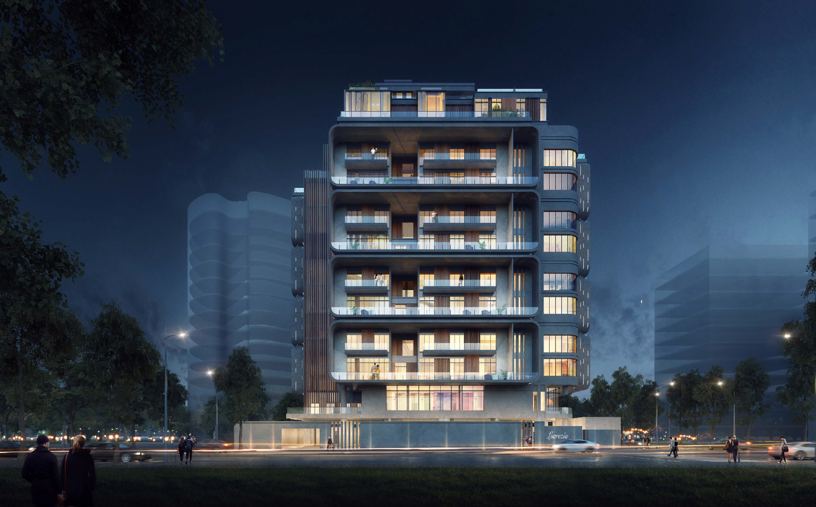 Towering 65m above the ground, the $52 million architectural masterpieces, LucreziaBySujimoto audaciously dominates the landscape of Africa’s most expensive square meter, Banana Island. The 14-storey skyscraper which is the brainchild of Sujimoto Construction Ltd, the leading luxury construction company in Africa, has a combined liveable space of 18,000 square meters and will be the tallest residential building in the highbrow neighbourhood.

The design of the sophisticated building combines the rare attributes of Beauty, Affluence and Style. The purely residential 14 storey tower includes luxury apartments which comprise magnificent maisonettes and 2 of Africa’s best penthouses, the first Virtual Golf Bar in Africa, Full Home Automation where you can control your lights, door, air conditioning, curtains, music & TV from the touch of a button, an IMAX Cinema, a 345 square meter temperature-controlled pool including a Jacuzzi and kids’ pool, the 14 storey building has a floor to ceiling height of 4m, which creates an illusion that makes it look 20 storeys tall, an Interactive lobby where business meetings and casual hangouts can be held, Zaha Hadid by Porcelanosa sanitary wares, Private Salon, Crèche, amongst a host of others.

During the construction phase of the foundation, 25,000 cubic metres of soil was excavated, a total of 11,500 cubic metre concrete of C40 was used to create one of the biggest pile caps in the world which has a 900 mm piles diameter that goes 45-meter-deep, making the Lucrezia’s foundation one of the strongest foundations ever! The pile caps have a depth of up to 2.55m with 900 x 300mm tie beams. In all, a total of 1470 trucks of concrete were required to deliver these pile caps. The luxury development will use approximately 1000 tons of steel, Bonded Post Tensioning slabs, this makes Sujimoto the first indigenous company to use such technology which is only used in Dubai for the construction of high-rise buildings. This technology reduces the weight of the building, increases the speed of construction by 40%, eliminates shrinkage and offers more flexibility for structural modifications.

The 56 metres condominium will be the first 14 storey with Glass Reinforced Concrete façade costing the company over €2 million (N1,146,000,000) to deliver one of the best façades systems in the world. The façade panels will have a finishing covering of approximately 7500 square metres.

Having raised the first slab on the 1st of December, 2020 and currently on the 8th floor, the Lucrezia will be the fastest luxury condominium ever built in Africa with a delivery timeline of 1st of January, 2022.

Those who came onboard 11 months ago are the biggest winners as some of them bought the maisonette for $1.2 million. The almost sold out maisonette is selling for $1.9m at the moment while the penthouse which is approximately 1400m² is selling for $9 million, making it the cheapest yet most sophisticated penthouse in Africa with exclusive and remarkable features such as a private gym, private looby, private lift, the first private pool in the sky which is located on the 12th floor, a private cinema and the first private gold Garden in Africa!

According to Sijibomi Ogundele, CEO Sujimoto Group, the Lucrezia’s penthouse is arrogantly built for the Vital Few.

I got N9,000 from the herbalist – Bricklayer narrates how he and his accomplice slaughtered mother, her 4-year-old so