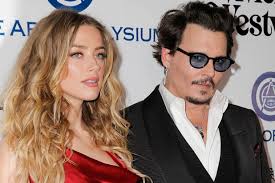 An awkward run-in was narrowly avoided at San Diego Comic-Con yesterday as ex-spouses Amber Heard and Johnny Depp steered clear of one another at the event. Amber was at the event to promote her upcoming film, Aquaman, while Johnny surprised fans who were attending a Fantastic Beasts: The Crimes of Grindelwald panel. As the Inquistir previously reported, Johnny showed up as his character Gellert Grindelwald.

The two actors were likely to cross paths as the panels to both of their movies were held in the same hall, one right after the other. Celebrities are always running into each other at large events like Comic-Con, and run-ins between actors are often documented on social media. Amber and Johnny’s camps likely kept the two apart on purpose as their very public and nasty divorce is still somewhat fresh. As reported by People, Amber filed for divorce back in May, 2016, and even requested a restraining order on the Pirates of the Caribbean actor.

Amber claimed Johnny had been physically abusive to her, which the actor vehemently denied. The allegations brought on Johnny caused many Fantastic Beasts fans to call for the removal of the actor from the sequel, but Warner Bros. and writer J.K. Rowling defended his casting and ultimately kept him in the film.

The 32-year-old actress didn’t seem phased by possibly crossing paths with her ex at the event, as she donned a short red dress and was all smiles alongside her co-stars during her film’s panel. Amber joked and laughed alongside Jason Momoa, Nicole Kidman, Patrick Wilson, and director James Wan. It’s possible Amber wasn’t even aware of Johnny’s presence at the event since his appearance was a complete surprise to everyone in attendance.

Many fans were disappointed to have Johnny show up at the event, still reeling from the accusations and holding firm in their beliefs that he should have been removed from the film.

According to a Hall H panel attendee, Johnny was booed during his appearance.“Everyone booed johnny depp in the new fantastic beasts trailer at sdcc…. i’m proud of u guys,” they tweeted.

Some are claiming however that his character was being booed, and not the actor himself.

“Let me talk to the SDCC director for allowing Johnny Depp’s ugly a** to be in the same vicinity as Amber Heard,” another fan tweeted  about the possible run-in.