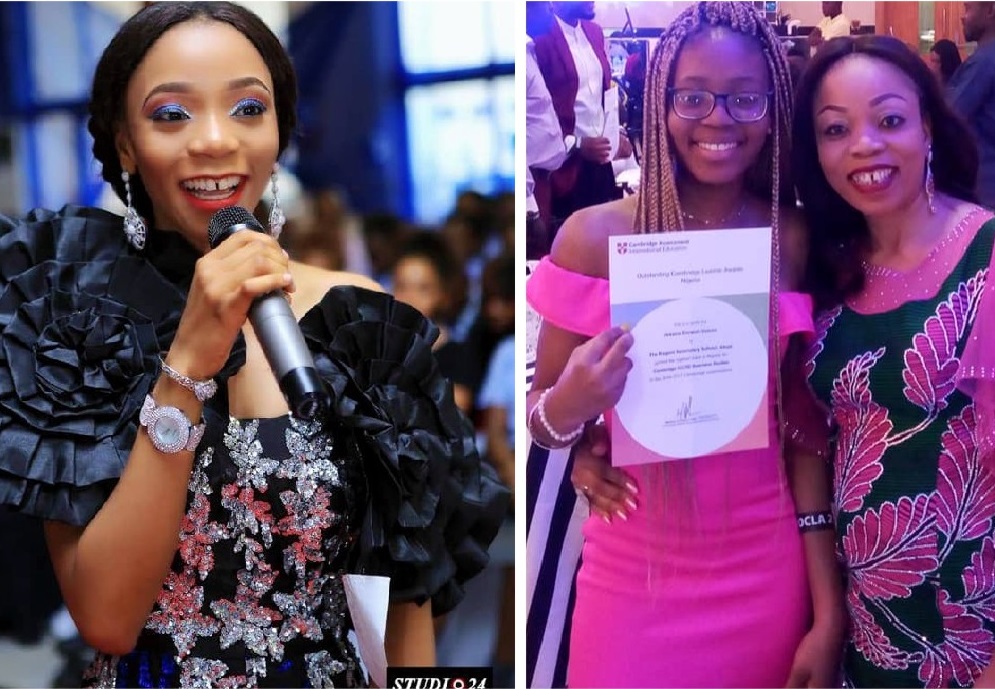 First, it was Stephanie Uviovo, who is a student at Charles Dale Memorial Secondary School, Port Harcourt, where she won a beauty pageant FACE of Charles Dale Memorial School. Her brilliance on the runway and her intelligence in answering every question thrown at her by the organizers took everyone at the audience by surprise, as her swift response and beauty became immeasurable.

At the Regent Secondary School in Abuja, Miss Jessica Eruwun Oviovo, made her parents proud with her outstanding performance in the “British Council Recognition and Outstanding Cambridge Learners Award 2018”, which was celebrated in Lagos a few weeks back. Jessica came tops in Nigeria for Cambridge IGCSE, as the award proper was intended to reward hard work of which this brilliant young girl achieved the highest mark in Nigeria and she made her Regent Secondary School, Abuja proud.

Now she is an Engineering undergraduate in the USA. The Oviovo family has Engineer Vincent Oviovo, their father as a Petroleum Engineer and their very brilliant mother Rosebells Uviovo, a graduate of Bio-Chemistry from University of Port Harcourt she is also has a Law degree, from Rivers State University of Science and Technology, Nkpolu Orowurokwo, Port Harcourt. Lady Rosebells Uviovo got a Masters Degree in Law (LL.M) in Transnational Oil, Gas and Energy Law from University of Derby United Kingdom and she is currently pursuing a doctorate degree in Criminal Justice from Atlantic International University in Honolulu Hawaii in the US. Apart from that, this Port Harcourt celebrity lady went to New York  and passed her New York Bar Practice examination. She is now qualified to practice as a Barrister at Law and Attorney in New York and in London she runs a legal office where she practices as an Attorney and Arbitrator and Mediator.

In Port Harcourt Lady Rosebells Uviovo is a successful legal practitioner. She spoke to City People Bureau Chief, EMEKA AMAEFULA a few weeks back during which she talked about good parenting and attainment of success by well bred children. Excerpts.

In terms of parenting, think I will start by giving God all the glory; this is because without God we cannot really achieve much. In psychology usually they use to say that a child’s personally trait is usually formed before the age of 5-years, which means that core parenting can actually be done from birth to the age of 12-years it is when you can actually groom a child impart all those morals spank the child, correct the child when the need be but as the child progresses in age between the ages of 13-years and 19th years which is the age for teenagers. As a parent I think the best thing you can do for your child between the ages of 13 to 19 is to try as much as possible is to make your children your best friends that way you will be able to get some very vital information from them and from that way you will be able to guide them when they make mistakes you will be able to say no, do it this way or that way.

What is the name of your daughter who won Face of Charles Dale Memorial international Secondary School?

The one who won the Face of Charles Dale her name is Stephanie Uviovo.

Que: Did she tell you before going into the Beauty pageant?

Yes, she told me and the school also wrote to me that they picked her to participate in the Face of Charles Dale Memorial International Secondary School they think that she has all what it takes.

As a Mother and a role model in the society, how did you feel on that day?

Well, you know we cannot really say that a beauty pageant is a small beauty pageant or a big beauty pageant, whether it is a big one or a small one it has the same effect and the same kind of tension , in fact the same kind of feeling like saying oh will she win? Is she really wearing the best outfit among the contestants? Is she presentable? Does she have the physical requirement of what it takes to be a Beauty Queen.

The tension is always there. The expectations are high but with God I kept on praying as a mother there is nothing that you can do other than to keep on praying and ask for God’s mercy to follow her throughout the competition. So that the judges will not be bias so as they will be able to pick the best candidate.

How did your daughter at Regent Secondary School Abuja, became the best student with the highest Mark in British Council IGSE examination?

Jessica Uviovo, right from birth she has always scored 95% and above in all her examinations. As she has never scored below 90% and she has always maintained that level from Nursery School to when she rounded up secondary school. She is a high academic intellectual and she likes to study. She devotes most of her time studying. And she has always want to be the best.

At home whenever they are at vacation, what do you do to make them attain extra academic success apart from school work?

Well apart from school work, I try to make them feel at ease because they say all work and no play makes jack a dull boy. Apart from the school work I also try to introduce them into extra curricula activities like they go for swimming  they go Bailey  when they were much more younger  Sometimes I register  them for Holiday programmes  where they can learn swimming , dance, playing with the Key Board.

Sometimes I do give them some promises that if you make good result I will give you so, so packages or if you make the best result I will buy you a car or that I will do this for you. Call it reward measures like if you score best you will go for summer holiday that you will travel to United States of America-USA. Such rewards I always promise them something. I think she likes to always get the prize.

We see a situation where students are overburdened with extra class lessons thereby over labouring the intellectual capabilities of the children, what is your take on this?

In terms of organizing extra lessons for the children you need to look at the strength of the children .And of a particular child involved like for Jessica’s case I didn’t have much problems with her as a child as she didn’t struggle academically. But for a child who is struggling academically and who is not able to cope up academically, there might be need to organize extra lessons say for one hour or extra 1:30minutes -hours a day say like 3-times a day to groom the child but not every day. I am not in support of that.

How does single parenthood it affect academic development of the child?

That is just a general belief, but I think raising of children has to do with God, there is nothing more you can do without God whether it is single parent or both parents that jointly raise up a child for that child to be successful you need prayers and God’s interventions for the child to be successful. We have seen a child who lived with both parents yet they are nothing to write home about in the society.

What has been the roles played by your husband in raising up your children?

To a large extent my husband has played very significant role in terms of being the head of the family. He also played a spiritual head of the family. In terms of making sure the family prays together and taking turns in the prayers sessions by the children. The children will be taking turns you pray today and another child prays tomorrow. He has been able to do that as he is a father and making sure that they go to church during mid-week also without being Sunday and Sunday church goers or persons.

So, I think to a large extent my husband has played a role in the sense that he has been able to draw them closer to God to make them know that without God you cannot do anything. When there is a man in the family the children intends to have that fear to say ‘oh because of my dad!’ As we mothers we intend to be friendlier with the children.   But when the man the head of the family is there children tend not to seen to misbehave to a large extent it is important. And the most ideal for both parents raise children up.

In these days of social Media, how do you exercise control and the use by the children from negative influences inherent from its abuses?

Even though Social Media has its negative effects it also has its positive effects. The only thing is not to be an extremist in everything is to be able to guide to say, look it is time for studies. And that’s why I will always recommend Boarding school to every child because; if you put your children to boarding school there is time to read. And they have 24-hours access to their phones or social media or internet so, there is time for everything.

But if the child tends to be Day student that goes to school from the home, you will find out that we parents are the working class we leave in the morning and come back in the evening; there is really no control over the social media thing. Except to just pray and ask God to guide and guard them and make sure that they do the right things at all times. So in this era of social media I will recommend that children be in Boarding schools to restrict the number of times they will spend on the internet or social media platforms.