How Asiwaju TINUBU Fell In Love With OLUREMI 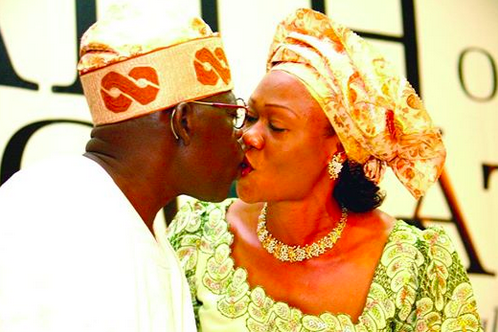 •The Story Of Their 31 Year Marriage Revealed
Their love story is one that you don’t easily hear about. That is the marriage of Asiwaju Bola Ahmed Tinubu, the former executive Governor of Lagos State and the National Leader of the APC to Oluremi Tinubu, a former first lady of Lagos State and a Senator representing Lagos. They have been married for 31 years.

Sometime in 1987, they were joined in holy matrimony. Tinubu, on that occasion, had vowed before man and God to love his wife till eternity, beautiful Oluremi, in return, had given her heart to him for keeps. Thirty one years after, both are still passionately in love with each other, and their marital life has been laced with more roses than thorns, thereby making them a model couple to their fans at home and abroad.

At an event years back Oluremi was said to have described her husband as “a lion in politics, but a lamb in marriage; a master of deliberation, but a partner at home; a man of testimony and a faithful servant of God.”Similarly, Tinubu reportedly described his wife as “a good mother, a loving wife, an excellent listener and a good homemaker.”

The 2 of them rarely grant interviews about their marriage but they have spoken about it once or twice. For instance, Senator Oluremi Tinubu, spoke about her husband during their 25 years anniversary and their love life. When asked what pet name Asiwaju calls her,she said, He has always called me Remi, but now, he calls me Mummy and I call him Daddy. My husband is very down to earth and not the lovey-dovey type.

He is a soft man, though he hides his emotions. On several occasions, he forgets my birthday. He even does funny things on Valentine’s day because he knows I like Valentine’s. But he would just come, analysing who Valentine was and all the story behind him to the extent that he messes the day up for me. Asiwaju would purposely forget my birthday. I was set in my ideas about marriage, but he made those ideas crumble in his own way.

I would say that we have to be together on the 31st of December, because I had this funny belief that the first person one sees on the 1st of January is the person one would spend the rest of the year with. See how twisted I was! But it is different with this man. I have a lot of people who share him with me.

It was not like that before he became a politician. He would always remember my birthday and other important events. We don’t have a private life anymore because he is always surrounded by a lot of people. On some occasions on my birthday, I would just excuse myself and stay in my room, and he would leave the people quietly when it is midnight, to say happy birthday to me.

He would come upstairs and pretend as if he wants to use the toilet or bathroom, just to make sure he doesn’t miss saying happy birthday to me when it is exactly midnight. He knows how sensitive I am to such things. So, he tries to bend backwards in his own way. I believe there is a strong love between both of us and also subscribe to the saying that love suffers long and conquers all things. Even when I advise couples, I always emphasis that love endures and has to be made strong.

Quote:
“I saw his eyes and thought he has very kind eyes. That was one of the things that attracted me to him. I believe that from the eyes, one can know the mind of a person. I think he got me with his eyes; they were very kind and penetrating eyes and that was how we started”.

She also talked about whether it was love at first sight when she met him,”The first thing to know is that attraction brought the two of us together. Though I didn’t remember who he was any more, my sister tried to remind me. I saw his eyes and thought he has very kind eyes. That was one of the things that attracted me to him. I believe that from the eyes, one can know the mind of a person. I think he got me with his eyes; they were very kind and penetrating eyes and that was how we started. He was serious about his job and had lofty plans about the future. He didn’t say things you would hear from most guys when he met me.

He just said: ‘I don’t have a lot of money, but I love to help people.’ So I thought that we had to cut the chase and was ready to settle down for the real business. I just thought that somebody was trying to introduce me to a journey and I concluded that it was a journey I wanted to be part of. I am generous in my own little way and from that angle, I thought it would be quite interesting to go along with.

For over 3 decades, their love is still waxing stronger,by the day. Asiwaju Tinubu has also lauded his wife over time on how she has been able to care for the home front, during his PA, Sunday Dare’s 50th birthday, he spoke glowingly about his wife and how he has always held her in high esteem, being there for him and for his children and family at large.

Asiwaju Tinubu has made a success of his marriage and also a success in politics. He has made a lot of people in politics in Nigeria and the trend is still ongoing. He is the godfather of politics and this, he has shown countless times with his actions, and doggedness towards all his political plans and rare feats.

Tinubu cuts across every geopolitical zones and he has immensely contributed to the emergence of Democracy rule in Nigeria..In his home, on Ikoyi, BOURDILLON House, it is a place where thousands of people gather to meet with him, like one of his aides rightly said, he rarely sleeps but derives joy in meeting people and solving people’s problems. His house is a Mecca of sorts and Fridays are days for chopping spree largesse in Asiwaju’s house.

He has placed many people on the high pedestral in their political career and without exagerating, he has made over 100 key guys in Nigeria. His lovely wife, stylish yet simple is the youngest of 12 children and she was raised in Ogun State but an indigene of the Itse-Kiri tribe in Nigeria. She is a holder of a National Certicate of Education in Botany and Zoology from Adeyemi College of Education, Ondo State. She thereafter obtained a Bachelor’s degree in Biology Education from Obafemi Awolowo University, Ile-ife.

How Asiwaju TINUBU Fell In Love With OLUREMI was last modified: February 11th, 2018 by Tayo Oyediji