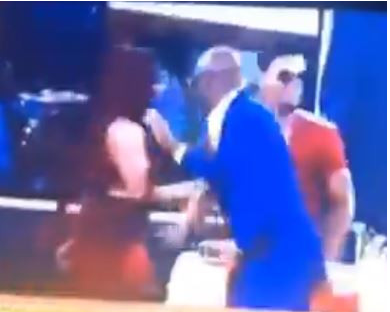 King of R&B 2face Idibia and Larry Gaga were special guests at the Big Brother Naija house on Thursday night to have a chat with the top 10 housemates and also celebrate his 44th birthday in style.

See the video and all the reactions below….

Tacha is a psycho, an asshole and a bitch for snubbing 2baba like that….. #bbnaija pic.twitter.com/EJMkL47yqS

Imagine the nonsense responses am reading here……her mind wasn't there? Like seriously? 2baba in da building of just few people….and he was saying hi to everyone and Tasha snubbed him ….I mean for real? And someone is saying she didn't do it on purpose…goshhhh

Don't mind these Tacha fans, their Favourite can never do wrong. That was definitely a snub even 2baba was shocked.

If you think everything is ok wt dis tacha girl. I seriously think you are mad#BBNaijia pic.twitter.com/HvN0hq1h7M

Mercy can't be the end of me🔥🔥🔥🔥🔥 local woman is happy😘 #BBNaijia pic.twitter.com/UmZ1jL7aot

Watch As Bovi and wife prank friend ahead of 40th birthday