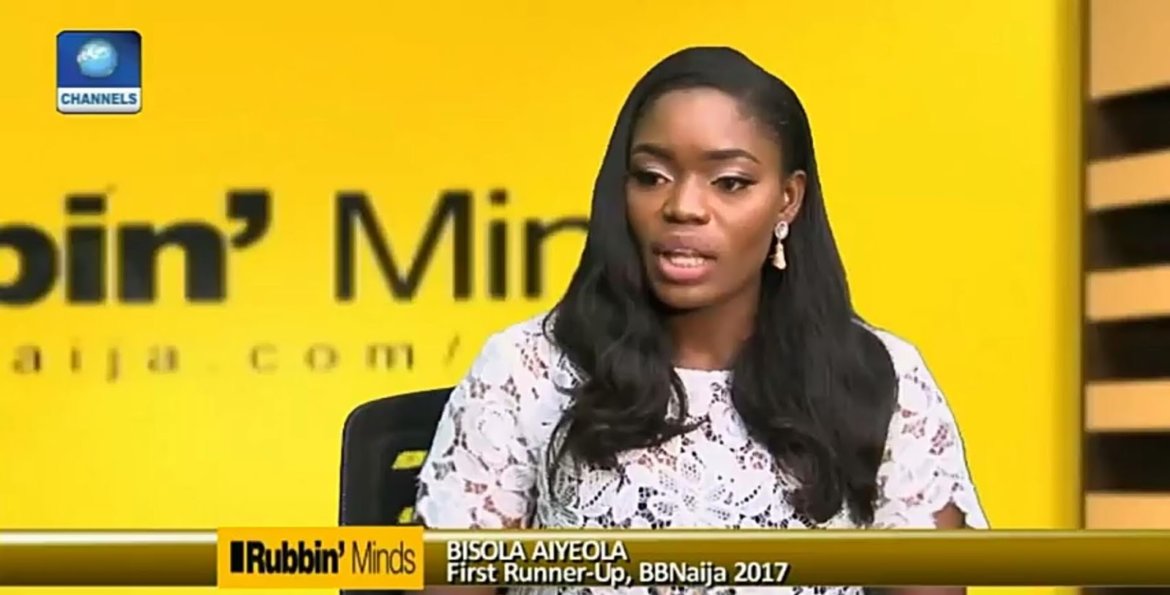 Bisola Aiyeola, first runner-up of Big Brother Naija 2017, on Sunday sat down with Ebuka for an interview on Rubbin Minds and reacted to accusations of being a bully and having anger issues as well as romance with ThinTallTony.

While speaking in an exclusive interview with the Ebuka Obi-Uchendu on Channels TV programme, ‘Rubbin Minds’, Big Brother Naija 2017 ex-housemate and first runners-up, Bisola, opened up being called an angry bully, her relationship with ThinTallTony, Efe, the ugly incident with TBoss and Kemen.
On being a bully, she said;
“That is not the true statement of who I am [but] I try as much as possible to let myself out when I am upset. I have lived a number of years of my life, bottling things in, and it didn’t do me any good. I walk around with a lump in my chest upset at somebody who doesn’t even know that they upset me.
“So, if you make me upset, I just let it out. And once it’s out there, it is done. So when people were saying [that I was a bully], I thought maybe it was their own way to trying to make me look bad on the show.I am not a bully. Maybe I talk a lot because I am a bit expressive, but I am not a bully.”
On getting to the final stage of the competition, Bisola said;
“I never even thought I would make it to the final. There were so many talented people in the house.”
On romance and relationship with ThinTallTony, Bisola said that she had thought he would emerge the winner of the show.
“To me, he was very entertaining, creative, funny. I saw him as a threat and I did tell him a couple of times. Because of these, I thought he was going to make it to the finals.”
Asked if she has had a proper conversation with TTT since the show ended, she said, “No. I didn’t want to dwell on that. I don’t think he has anything to explain to me. He has apologised.”
On the standards being used by people to judge single mothers, would it have been different if she was a guy? Bisola replied;
“It definitely would have been different. There’s a stigma attached to single mothers, especially if you have a child out of wedlock. You’re judged. A lot of people actually said to me that they thought I had my child while I was in secondary school.
“I was like no, I was a grown woman. I was 23 year old when I had her. They kind of make it seem like the whole world is against you. It’s now up to the woman to bring herself up and I have an amazing family. My mum has always been on my side. If I was a guy, I would be celebrated more.”
Bisola also talked about her relationship with TBoss in the house.
Watch the videos below:
#BBNaija’s Bisola Speaks on Alleged Bullying, ThinTallTony, TBoss, Being a Mum at 23 & More (Videos) was last modified: June 5th, 2017 by Arinze Ago

Keep Off! Alexis Sanchez Not For Sale – Arsenal Tells PSG